Fire accident in Mandaikkadu Bhagavthi temple, the Sabarimala of women 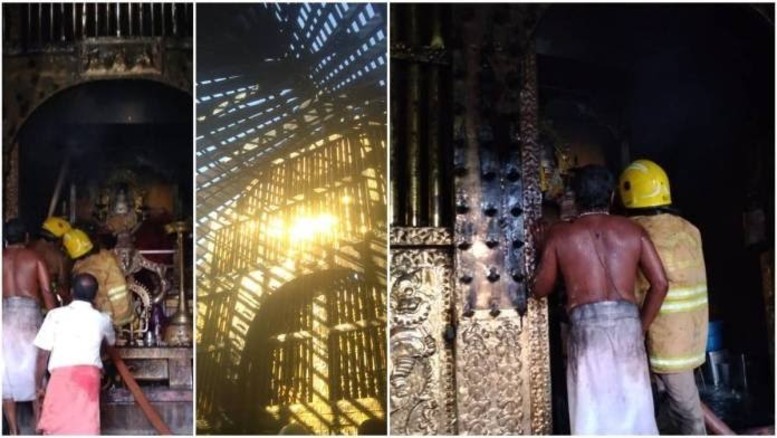 In the midst of the pandemic, the fire accident in the famous Mandaikadu Bhagavathi Amman temple has left Sanatanis of Tamil Nadu in shock. The temple is known as the Sabarimala of women as women go there on a pilgrimage after 40 days of fasting. Roof of the temple is said to have caught fire after the usual morning puja.

Being located in Kanyakumari, the temple receives devotees from both states and abuzz with crowds in normal times. However due to Covid-19 induced lockdown, like all other temples Bhagavathi Amman temple has also been closed for public worship. But pujas and customs are being followed inside the closed doors as usual. On 1st June the priests had conducted the morning puja and were out in the front yard when the fire broke out. The roof, made of wood in line with the architecture of temples in regions adjoining Kerala, was on fire and the sanctum sanctorum was engulfed in smoke in no time.

Local devotees expressed their doubts about the possibility of the diya lighted in the sanctum spreading fire. Nonetheless the incident has troubled the minds of devotees, as fire accidents in temples are considered as a bad omen. Earlier Madurai Meenakshi Amman temple also met with a fire accident in which the 400 year old, 7000 square feet Veera Vasantharayar Mandapam and 36 shops operating inside the temple were gutted in 2018. The reason behind the accident was presumed to be a short circuit in one of the shops.

This incident caused widespread criticism of HRCE’s negligent approach towards preserving temples. As a result, HRCE decided to vacate shops that were operating inside, or near temple complexes. HRCE is still in the process of vacating shops as most of the shopkeepers have gone to court against this decision. A few days ago, two 4 pillar stone halls in front of the Srirangam Ranganathaswamy temple Raja Gopuram were retrieved from the shopkeepers as a part of this process. The shopkeepers had encroached the property for 40 years.

Hindu organisations have accused HRCE of negligence as the reason behind the Mandaikadu temple fire accident as well and Thiruthondar Sabai, an advocacy organisation involved in temple activism, has filed a petition in the Madurai bench of Madras High court. It has demanded that the fire safety measures in temples should be subjected to review and the temple must be renovated without damaging its traditional structure. BJP state president L.Murugan along with BJP MLAs Nainar Nagendran and M.R.Gandhi examined the damages caused by the fire accident and requested for a fair investigation into the issue.

In another incident a Linga was found damaged in Palani. The Linga was part of an open space temple on the bunt of a pond in a village in Palani. Sapta Kannikas, Karuppasamy and Linga with Nandi were worshipped in the temple. Allegedly the Karuppasamy murty also was found in a damaged state a few months ago. Now the upper part of the Linga has been chopped off. Villagers have alleged that some anti-social elements camp at the temple. Villagers suspect that they could have damaged the murties and demanded strict action and protection from police.