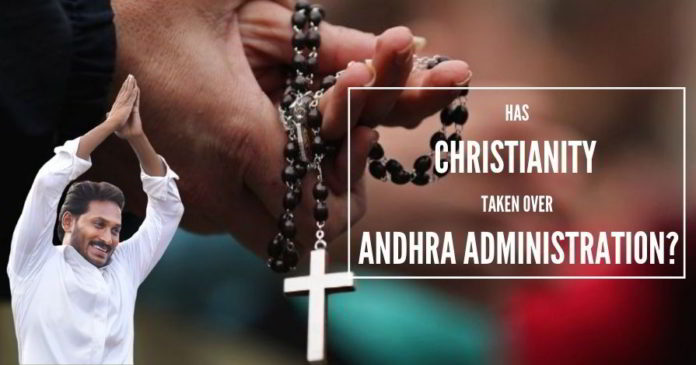 In a hilarious turn of events, Hindus of Andhra outwitted converted Christians for once by turning their own trick against them. In the Mandal Praja Parishad elections Hindus grabbed the seats allocated for minorities by obtaining fake baptism certificates and becoming Christians overnight. Even though it could be seen as Christians getting a taste of their own medicine, the sad reality is that Hindus have to resort to such tricks to get what is rightfully theirs.

The Andhra Pradesh Christian Leaders Forum has alleged that there have been violations in appointing members in the Mandal Praja Parishad elections in Visakhapatnam. The forum has alleged that Hindus have been appointed in the co-opted posts in the quota meant for minorities. The forum’s chairman Oliver Rayi told The Hindu, “These positions were offered to those who produced fake Baptismal certificates overnight, depriving Christian minorities”

Ironically, forgetting the fact that the Christian community demanded minority quota for the exact same purpose, he pointed out that if these persons continue to hold office it would imply that “government by itself was encouraging conversions by luring them with posts such as these”. It is to be remembered that a lot of converts hold Hindu SC certificates to avail government benefits and reservation illegally.

Recently a Hindu hating bishop, Suresh Kumar Kathera, was declared as an SC Hindu by Guntur district collector, despite the fact that he runs 10 bible colleges and a church, King’s temple. His wife Henry Christina was elected and sworn-in as the Zilla Parishad Chairman of Guntur. She had contested from a SC reserved seat using a SC Hindu certificate. The Kathera family are members of YSRCP and close to the Christian CM Jagan Mohan Reddy. Oliver Rayi and his forum would do well to answer for this injustice first, before accusing Hindus of snatching their rights.

While it is encouraging to hear that Hindus outwitted Christians at their own game, it must be remembered that the minority quota itself was carved out of the reservation Hindus already had. As even taking a wrong turn on the road can make Hindus pay hell thanks to the secular state, such tricks aren’t always feasible.

The issue of SC Hindus who converted to Chrisitianity demanding separate quota will further diminish opportunities for Hindus. So both politically and culturally Hindus should put in efforts to stop conversion and converts using SC Hindu certificates.