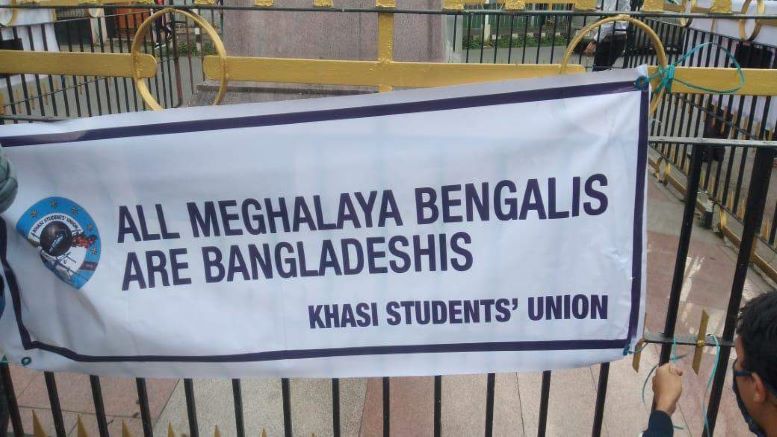 The Bengali Hindu minority of Meghalaya have come under attack from the Khasi Student’s Union (KSU) which put up posters racially profiling all Bengalis in Meghalaya as Bangladeshis. The posters came up across Shillong on October 21 and were taken down by the police the next day.

Khasi Students Union making things in beautiful Meghalaya tense. The board says All Meghalaya Bengalis are Bangladeshis. This could not be further from the truth. Shameful religious discrimination where the Bengalis are a minority. pic.twitter.com/nd9dTWbiXL

While the posters took aim at all Bengalis in Meghalaya, the real target is believed to be Hindus as there is a long history of discrimination against Bengali Hindus in the Christian-majority state.

Several Bengalis, including ex-MP Sushmita Dev of the Congress, have written letters to the governor, PM, and President regarding the discrimination. One of the reasons for the discontent among Hindus is the denial of permission to run their businesses despite the lockdown restrictions being lifted up. Furthermore, they have also alleged that the administration is not giving them the exact reason behind its decision.

After protests by Hindu groups, the Meghalaya police was forced to take action and remove the posters hung up across the city. While the police made an appeal for ‘co-operation to promote peace and harmony in the state’, it appears no FIR has been filed as yet to apprehend those behind the act.

It is believed that the death of a 35-year-old taxi driver Lurshai Hynniewta in February this year, said to be a member of the KSU, at Ichamati as a result of clashes between KSU and Hindus during an anti-CAA rally, is the main reason behind this anti-Hindu act.

LRO (Legal Rights Observatory), an legal rights NGO, has alleged the involvement of the UK based Presbyterian Church in fomenting anti-Hindu hatred in the Christian majority state of Meghalaya.

Dear @MeghalayaPolice @CidMeghalaya Plz identify n counsel those in photos; if U have that capability n conviction! We don't blame #KSU for it but real brain behind hatemongering is @Presbyterian Church n their Scottish masters. No grudges against misguided Khasi SU youth! pic.twitter.com/wful9S4DaL

In recent times, there have been increasing attacks on indigenous faiths by Christian missionaries with cases of temples of tribal Hindus being vandalized by Christian extremists being reported from the state. Additionally, news of Christians in positions of authority such as police officers threatening tribal Hindus has also come to light. Cases of assault on Hindus in the capital of Shillong are also being recorded with increasing frequency.

As stated by Hindupost in an earlier report of violence that broke out in March during anti-CAA protests:

“Meghalaya is a Christian tribal-state – over 86% of its population belongs to Scheduled Tribes (STs) and 74% are Christian. This assault comes on the heels of violence in Meghalaya in early March after an anti-CAA and pro-ILP (Inner Line Permit) rally organized by the KSU (Khasi Students Union) clashed with non-tribals, leaving one Khasi tribal dead.

As a retaliatory response, a spate of stabbings of non-tribal people rocked the capital Shillong the next day in which a non-tribal vegetable vendor was killed and 9 other non-tribals injured. Subsequently, the Hynniewtrep National Liberation Council (HNLC), a banned Christian tribal terror group, had threatened ‘mass bloodshed’ if Hindu-Bengalis in Ichamati and Majai areas in East Khasi Hills district do not leave within one month.

…Since its inception as separate state in 1972, Meghalaya has a chequered past when it comes to ethnic conflicts and every time it’s  the non tribal population which comprises mostly of Bengali, Nepali and Marwari and Hindi-speaking people who were at the receiving end.

The first major incident of religious intolerance occurred in 1979 when some Khasi youth desecrated a Maa Kali murti. Khasi vigilantes, egged on by the evangelical Church and with state-granted immunity, started targeting the Dkhars (pejorative name for non-tribals) i.e. Bengali Hindus.

Youth organisations like the Khasi Students’ Union that are notoriously anti-Dhkar often give calls for ousting Bangladeshi infiltrators, a dog-whistle signal to launch attacks on Hindus belonging to different communities. Muslims are rarely targeted. Because of this, over the last few decades a large number of Hindus have been forced to leave Meghalaya.”

Unfortunately, anti-Hindu hate, terror attacks by Christian extremists, discrimination against non-Christian tribals, denigration of ‘idol-worship’, communal calls by Church before elections – all this is not restricted to Meghalaya alone but is observed across the North East – in Nagaland, Mizoram, Assam, Tripura and Arunachal.