“Nagaland is not a Hindu State, won’t allow fanatics to dictate our Christian State”: Naga Student Body to Indian Army 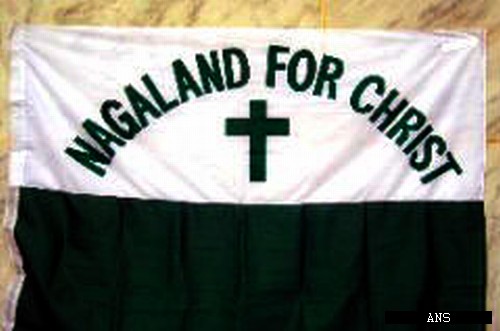 A Naga student body has taken umbrage to the mere mention of a ‘Hindu basti’ in a press release by the Army regarding some social awareness work carried out in a particular region of Nagaland. The Tseminyu Students Union bared their anti-Hindu indoctrination by claiming that their ‘sentiments were hurt’ by the Army statement as no village in Tseminyu territory falls under the ‘domain of Hinduism’. They stated that Nagaland is a ‘Christian state’ and appeared to label all Hindus as ‘fanatics’.

Here is the full report which appeared in a Nagaland-based paper The Morung Express dated 19 July, 2017:

“Taking exception to the mentioning of “Hindu Basti” Tseminyu by the 28 Assam Rifles which appeared in some local dailies (dated 17/7/2017), the Tseminyu Students Union (TSU) has clarified that, “No village under the Rengma region or Tseminyu territory falls under the domain of Hinduism.”

While acknowledging and appreciating the “good initiative” of the AR, the TSU maintained that beyond the “Samaritan act”, the ignorance of an organised institution is a matter of shock and surprise. “This statement has deeply hurt the sentiments of the TSU,” a press release from the TSU stated.

In this regard, the TSU sought clarification from the 28 AR for referring Tseminyu Village as ‘Hindu Basti’ and demanded that the 28 AR give a clarification or render an unconditional apology.

“Nagaland is not a Hindu State and we will never allow fanatics to dictate our Christian State with baseless statements,” the TSU further stated.”

The note ‘The Christianisation of the Northeast’ published by  Centre For Policy Studies (CPS) shows how the demographics of the northeast have drastically changed in the last century. Much of the Christian expansion in the northeast occurred during 1931-51, and more prominently during 1941-51.  In that period and following Independence, the Church began to inspire and lead the various militant assertions of tribal and regional sub-nationalism in this region. This seems to have helped the continued expansion of Christianity throughout the region after 1951. The tribal populations of Mizoram, Manipur and Nagaland have now become almost entirely Christian.

The Hinduphobia expressed by  Tseminyu Students Union  is not a one-off. It reflects a deep-rooted fanaticism bred by the Baptist Church – Nagaland is known as “the only predominantly Baptist state in the world” and among Christians, Baptists (an aggressively Evangelical Protestant sect with its base in Southern US) constitute more than 75% of the state’s population. Recently, the largest church in Asia, Sumi Baptist Church, was dedicated at Zunheboto town in Nagaland.

Nagaland has witnessed a separatist insurgency for many decades led by The Nationalist Socialist Council of Nagaland (NSCN), a Christian Naga nationalist terror group whose main aim is to establish a sovereign Christian state, “Nagalim”, unifying all the areas inhabited by the Naga people in Northeast Bharat and Myanmar. The organization’s slogan is “Nagaland for Christ”.

NSCN’s manifesto is based on the principle of Socialism for economic development and a Baptist Christian religious outlook. In some of their documents the NSCN has called for recognising only the Baptist religion in Nagalim. The NSCN was declared a terrorist organisation in Bharat in 1967. In 2015, the Government of Bharat signed a peace accord with NSCN-IM faction but the NSCN-Khaplang faction has continued their terrorist campaign.

The National Liberation Front of Tripura (NLFT), is another terror organization backed by Baptist groups that seeks the secession of neighbouring Tripura. The NLFT includes in its aims the forced conversion of all tribespeople in Tripura to Christianity. The NLFT says that it is fighting not only for the removal of Bengali immigrants from the tribal areas, “but also for the tribal areas of the state to become overtly Christian”, and “has warned members of the tribal community that they may be attacked if they do not accept its Christian agenda”.

Tripura’s CPM-led state government contends that the Baptist Church of Tripura supplies arms and gives financial support to the NLFT. Reports describe activities such as the acquisition by the NLFT of explosives through the Noapara Baptist Church in Tripura.