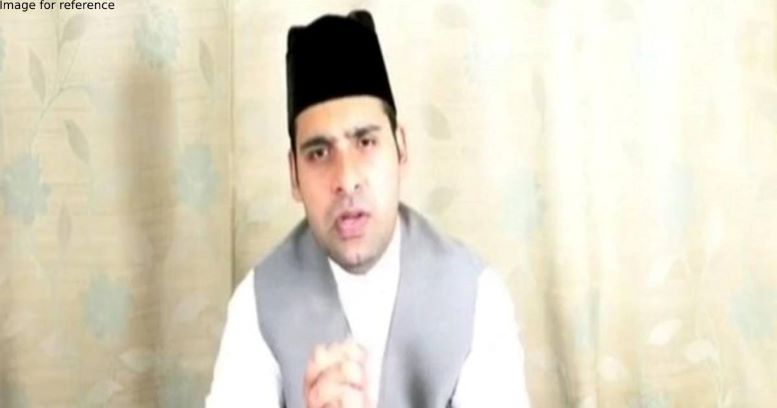 A day after spewing venom against Hindus and mocking Hindu Bhagwans and beliefs, Sarwar Chishti’s son Syed Aadil Chishti conveniently made a u-turn. He said he didn’t intend to hurt anyone’s religious beliefs or sentiments and added that he only conveyed his thoughts on Nupur Sharma’s comment. He even ‘apologized’ for his comments. He further alleged that the media played his edited video.

Chisti had recently released a video questioning the existence of 333 crore Hindu Devis and Devatas. He opined that even if a person lived for a thousand years, he can’t please 333 crore deities. He further mocked the incarnations of Bhagwan Vishnu calling them illogical.

He wanted to know how one could justify the avatars of Bhagwan Vishnu, some of which were humans, yet others animal forms, and still others a combination of humans and animals. “How will Nupur Sharma justify the existence of Lord Hanuman or Lord Ganesh?” Chishti asked. Chishti has no idea about Hindu Dharma, yet he feels the need to lecture Hindus.

This comes just days after Ajmer Dargah’s Khadim Sayed Sarwar Chishti made provocative remarks. He said India would shake if Muhamad was insulted and that it would not stop at the beheading. The statement came right after the beheading incident in Udaipur where two Islamists murdered Kanhaiyalal Teli.

Anjuman Committee Secretary Chishti warned that if Muhammad is insulted, Muslims will start a movement to jolt India. Ajmer Deputy Mayor Neeraj Jain confirmed no complaint was lodged and neither Sarwar Chishtinor his son have been booked.

Ever since Nupur Sharma commented on Muhammad, several clerics have made hate speeches not only against her and her supporters but also against the entire Hindu community. “I swear by my elders, I swear by my mother, I will shoot her openly. I swear by my children, whoever brings Nupur Sharma’s head, I will give this house to him”, Salman Chishti said in a video.

Ajmer Dargah’s Khadim Gauhar Chishti is also said to have given a provocative speech on June 17 during a rally. ‘Gustakh-e-Rasool ki ek hi saza, sar tan se juda’ slogans were raised during the rally. Ajmer Dargah Khadim Syed Sarwar Chishti made a video on June 26 threatening Nupur Sharma supporters over remarks on Muhammad. In what can be termed as nothing but hypocrisy, while the Dargah maintains it ‘advocates’ peace, its Khadims deliberately instigate Muslims.

During a Times Now debate, Ajmer’s Deputy Mayor also confirmed that Sarwar, Gauhar, Salim, and Adil Chishti are related. They have repeatedly been making provocative speeches while the Congress-ruled Rajasthan government has backed them by inviting them to ‘peace rallies’.

Islamists have been emboldened due to the inaction of the secular state, and Hindus across the country have been receiving death threats. Islamists threatened a minor girl in Mumbai for opposing Kanhaiyalal’s beheading. Islamists murdered medical practitioner Umesh Kolhe in Amravati.

The situation is no different in Nagpur, where an entire family had to flee after their younger son came on the local Islamist hit list. A Hindu man was assaulted in Bihar, and a Hindu activist and his two friends were critically wounded in an attack in Karnataka’s Bagalkot, allegedly for the same reason: supporting Nupur, i.e., protesting the unconstitutional demands to hang her.

It is easier to get away with mocking Hindu Devis and Devatas in India because parties like Congress consider it their duty to ensure that people like Chishti never have to face the law. The tolerance of Hindu society is being taken for granted.