NDTV is notorious for its anti-Bharat tilt, its vilification of Hindus, excessive ‘consideration’ of Islamist causes and Islamic countries. Its reporters have had their share of notoriety.

Barkha Dutt has been accused of revealing sensitive information about security operations during the Kargil War & 26/11; she has peddled the Islamist narrative that Kashmiri Pandits contributed to their own religious cleansing by depriving valley Muslims of economic opportunity; she promoted the dangerous Islamist ‘sheroes’ of the anti-CAA protests. Ravish Kumar has gone so far in painting crimes by Muslims with a broad brush dipped in saffron, that he ended up spreading fake news that the infamous gun-wielding Delhi rioter Mohammed Shahrukh was some Tiwari. 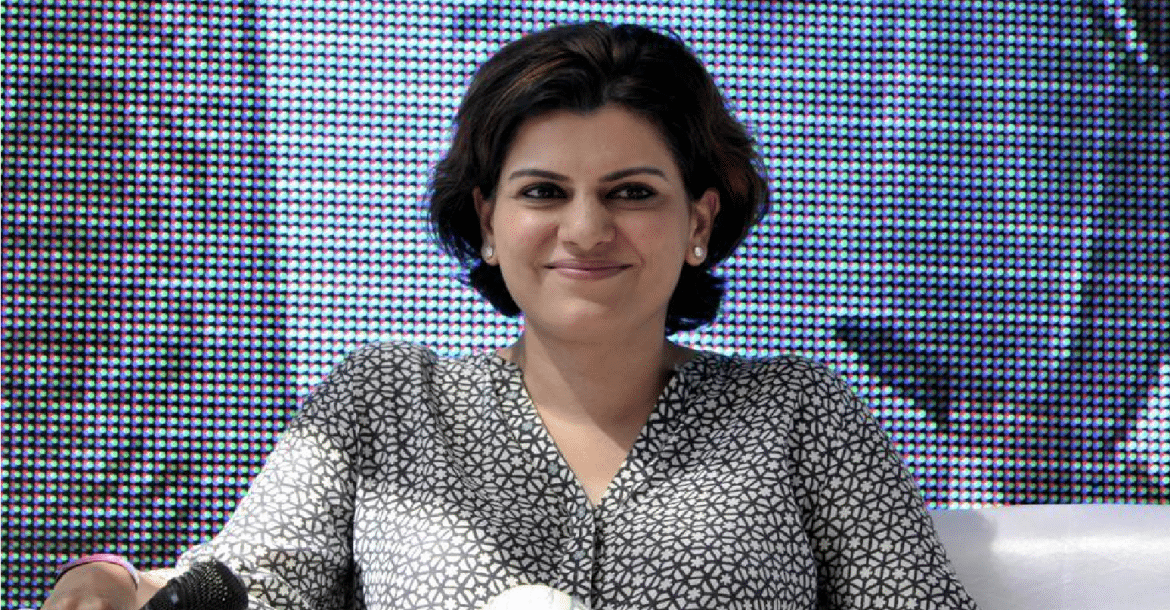 The channel itself is mired in financial irregularities and the owner-promoters Prannoy James Roy and his wife Radhika Roy (sister of CPI-M politician Brinda Karat) are the subject of probes by investigative agencies. Citizen talk shows and debates hosted by the channel are notorious for placing their own people, coached beforehand, among the audience.

Nothing from the NDTV stable really shocks the neutral observer anymore. But the channel plumbed new depths when its ardent Congress supporter, Omar Abdullah sympathising anchor Nidhi Razdan was revealed to have exchanged a series of convivial messages with a twitter handle run by the IS-linked terrorist couple who were nabbed by the Delhi police on Sunday from Jamia Nagar, South Delhi.

Intelligence officials ascertain that the couple had links with Huzaifa al-Bakistani who is the Pakistani commander of the Islamic State’s Khorasan wing and had played a key role in radicalizing the youth of Kashmir. It is suspected that the couple was planning to carry out ‘lone-wolf’ attacks in Delhi and played a role in inciting Muslim youth to violence over CAA. As per reports, they have been receiving directions and assistance from the terror organisation Islamic State and were working towards recruiting youth for Islamic State Wilayah al-Hind (India unit). 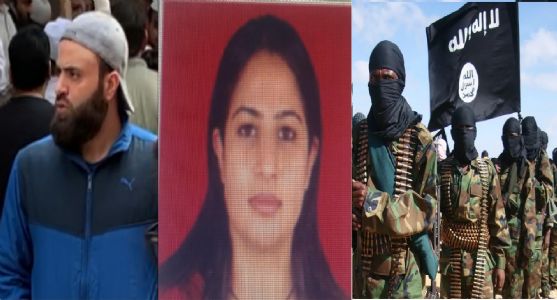 The couple had a significant presence on social media platforms like Twitter, Telegram etc. On twitter, they were running an account @kashmirosint. As the username reveals, it was an OSINT account. For the uninitiated, an OSINT is an abbreviation for Open Source Intelligence, and the many OSNIT accounts that exist on twitter operate with the aim of collecting data from publicly available sources. The information collected is then employed in an intelligence context. According to police, the arrested Muslim couple was active on social media site to identify ‘talent’ for their terror activities. In a nutshell, they were spreading propaganda and scouting for terror recruits through the Twitter handle @kashmirosint. 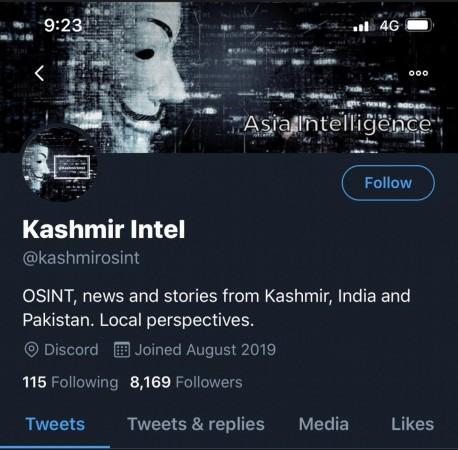 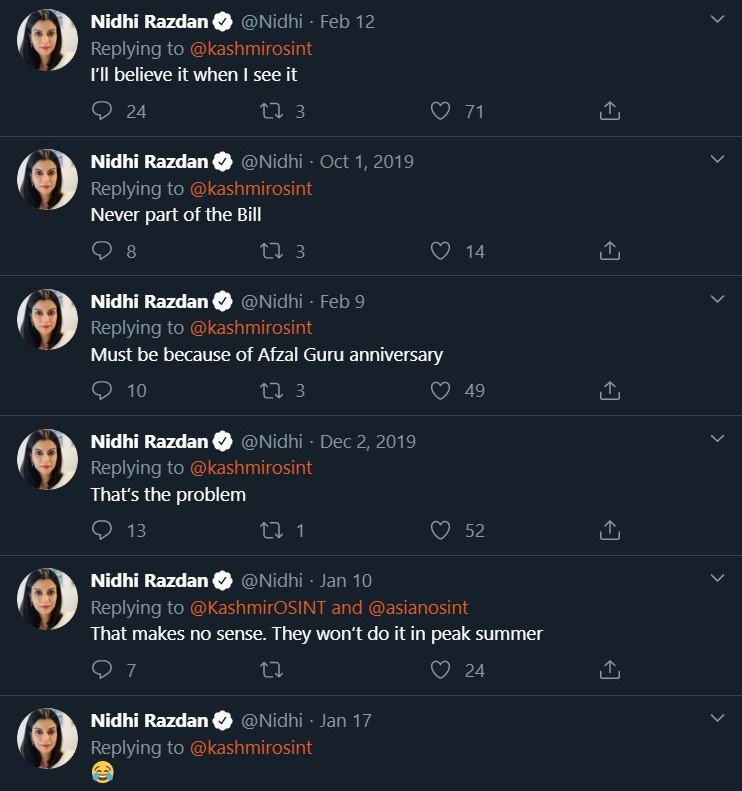 And it’s not like Nidhi Razdan had one odd interaction with @kashmirosint – she had repeated emoji-laden engagements with the handle over a period of several months. The account @kashmirosint has now been deleted, and we can see only Nidhi’s side of the conversations. The question arises: Why was NDTV journalist Nidhi Razdan communicating with such apparent ease with a twitter handle being operated by terrorists? We are not saying that she definitely knew who was running the handle, or even if she did that they were Islamic State terrorists. But this shows a definite alignment of thoughts with people who are out to destroy Bharat and create a sharia state in its place. Even if we credit the terrorist couple with camouflaging their ulterior motives, it shows how susceptible a large section of our left-liberal media is towards narratives which damage the national interest.

Being a Kashmiri Pandit herself, one would have expected Nidhi Razdan to have greater understanding of the Islamic radicalization that has gripped Kashmir. But self-hate and ‘Stockholm syndrome’ has been known to afflict many in persecuted communities. Upbringing also plays a crucial role in how well we know our history and roots. Her father MK Razdan was the former editor-in-chief of news agency, Press Trust of India (PTI) – PTI’s left-liberal bias is all too well known.

Also, this is not the NDTV journo’s first brush with terrorists or terror organizations. Back in November 2019, she had attended a “Kashmiri” event held in the UK named ‘The Cost to Britain of the Kashmir Crisis: Is There a Solution?” Razdan was endorsed by terrorist organization JKLF at the function.

In November 2019, she also tried to incite anti-Bharat sentiments among Kashmiris by peddling the false news that they were being prohibited from offering prayers at the Hazratbal shrine in Srinagar.

One can only pray that there is peace, that Kashmiris can soon have the same rights as other Indian citizens like full communication, right to prayers, and democratic activity with the release of political leaders who are still detained

Her false claims were soon countered and debunked by the District Magistrate of Srinagar, Shahid Choudhary who posted pictures from the shrine.

Nidhi Razdan has also been at forefront of scare mongering over CAA-NRC. As a moderator for an anti-CAA townhall show, she facilitated the fear-mongering of Delhi CM Arvind Kejriwal who falsely stated that every Bharatiya citizen who will fail to produce their and their parent’s birth certificates will be made to leave Bharat under CAA.

Terrorist couple Jahanazaib Sami and his wife Hina Bashir Beigh, who were running the twitter handle that Nidhi  Razdan was exchanging tweets with, are from Srinagar. They had moved to Delhi following the abrogation of article 370 and 35A last August. With their IT expertise and MBA degrees, the highly educated Muslim couple debunks the popular left-liberal theory that poverty and lack of education are the root cause of terrorism. It’s something else.