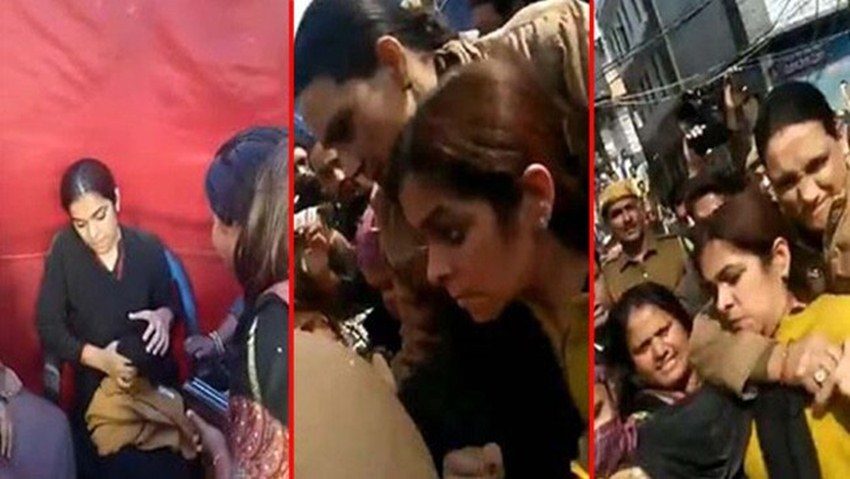 An independent woman journalist, Gunja Kapoor, who was trying to cover the Shaheen Bagh protests was almost lynched by the hysterical mob which has occupied an important thoroughfare in the nation’s capital for over a month now, all in the name of protesting an Act (CAA) which does not affect any citizens’ rights in any way whatsoever.

#WATCH Political analyst Gunja Kapoor extricated by police after protestors at Delhi's Shaheen Bagh alleged that she was wearing a 'burqa' and filming them. #Delhi pic.twitter.com/llRiKhMvOd

The protestors alleged Gunja was ‘wearing a burqa and secretly filming them’ sparking off their ire. Given the ferocity with which these loutish protestors have attacked, heckled, manhandled and outright barred media personnel representing outlets they consider biased towards them, going undercover seems to be a sensible option.

But instead of condemning this brazen assault on an independent analyst who is just trying to report ground reality using a standard investigative journalism technique, Lutyens’ media elites have turned a blind eye or condoned the harrowing experience Gunja was put through.

I have lived for this day. Are left- liberals now saying Sting journalism isn’t legitimate? They have made stars out of sting journalists.Their current muse has only done sting operations in Gujarat and recently smuggled a foreigner in Kashmir.Hypocrisy is delicious when exposed

If a woman journalist from The Print, Wire, Indian Express etc were similarly roughed up in a protest by Hindus, the same Lutyens’ media would have been shouting from the rooftops baying for blood of the attackers – the entire country would have been reading about ‘goons muzzling free speech, free speech under attack’.

First, a look at the geographical layout of the Shaheen Bagh/Jamia Nagar area, which incidentally also houses the infamous Batla House where Indian Mujahideen terrorists were shot dead by Delhi Police in 2008 – this shootout was cynically dubbed ‘fake’ by the entire Congress-led secular ecosystem despite the fact that Inspector Mohan Chand Sharma sacrificed his life in the shootout! Now, let’s understand the series of attacks that have taken place in Jamia/Shaheen Bagh area on media personnel dubbed as ‘Godi media’ (a dog-whistle term for channels deemed pro-Modi, i.e. those who refuse to toe the Islamist-left-liberal line on each & every issue).

1.) Consulting Editor of News Nation Deepak Chaurasia was attacked by a mob at Shaheen Bagh – he was heckled and manhandled as he reported from the venue. The video journalist accompanying Chaurasia was attacked as well and the camera was destroyed. His English-language journalism colleagues from outfits like NDTV, The Wire, CNN News-18 casually justified the attack branding Chaurasia ‘not a journalist’, or calling the attack a ‘consequence’ of Chaurasia’s journalism.

3.) A Zee News team was heckled and assaulted by the protesters in Jamia area. Zee News senior reporter Jitendra Sharma and his associate Neeraj Gaur had arrived at Sukhdev Vihar metro station in Delhi to cover the protests along with cameraperson Qamar Khan when they were attacked by the rioters.The channel’s camera and recording equipment were completely damaged, the news team was dragged by the protesters for several meters and attempts were made to thrash them, snatch their belongings.

2.) Republic TV‘s crew was dragged and thrown out of the Jamia Millia University Vice-Chancellor’s office. Another day, they were heckled, told to switch off cameras, blocking them from reporting about the students’ protests.

5.) ANI news agency, fast becoming  a real hate-figure among the ‘liberal’ cabal, reporters Ujjwal Roy and Sarabjeet Singh were assaulted by a mob at Jamia Millia Islamia during anti-CAA protests in December.

6.) Asianet News, a prominent Malayalam news channel which usually toes the left-liberal line on issues, was also not spared. Its journalists were also attacked by Jamia Millia university mobs.

7.) Pratima Mishra, a journalist from ABP News was heckled and molested by a mob near Jamia Millia in December.

8.) This video shows a Republic TV woman reporter being heckled and chased away by an aggressive mob in the Jamia Nagar area hooting and shouting ”RSS ke dallon, sharam karo” (stooges of RSS, have some shame)

Other incidents of the left-liberal-Islamist nexus targeting media outlets across the country, not just in Shaheen Bagh and Jamia area of Delhi, can be seen in this OpIndia report.

Which are the channels which are being welcomed with open arms by the ‘protestors’, while the rest are violently barred from even setting foot in the (republic of?) Shaheen Bagh – NDTV, India Today, Indian Express, Hindustan Times, The Wire, The Print, Scroll, Quint, BBC, Telegraph, CNN-News 18, Times of India etc.

These outlets (maybe they can be dubbed as ‘Chornia channels’?) are not abused as ‘Godi’ media, because if there is one thing the anti-CAA ‘protestors’ excel at, it is knowing who is part of their IN group and who is OUT. Not for them the ambivalence like many Hindus still harbor for ‘journalists’ like Barkha Dutt, Ravish Kumar, Rajdeep Sardesai despite repeated examples of their anti-Hindu agenda.

Not only has the spread, intensity & leaderless spontaneity of the anti-CAA/NRC protests foxed Modi govt, it is also the presence of so many young, articulate women, incl Muslim women in front…

BJP Govts, at the centre and its states, don’t know how to handle these