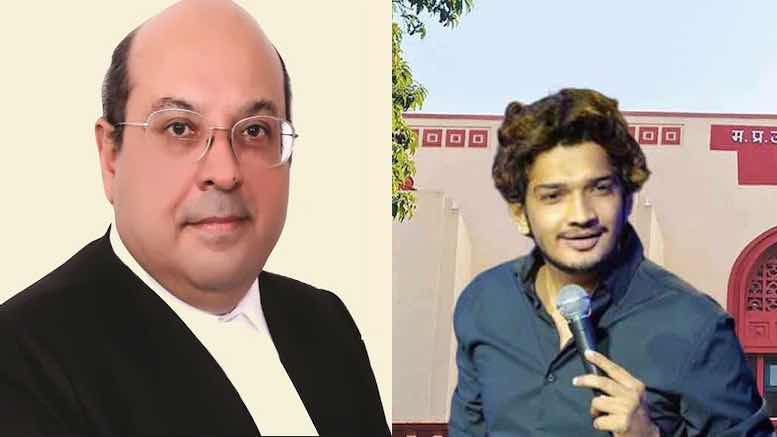 The Supreme Court has granted interim bail to ‘comedian’ Munawar Faruqui, who had challenged the Madhya Pradesh High Court order which refused to grant him bail in a case where he was charged with hurting Hindu religious sentiments.

A bench headed by Justice Rohinton Fali Nariman noted that the Madhya Pradesh Police ‘flouted’ the top court judgment in Arnesh Kumar versus Bihar of 2014, during Munawar’s arrest. The bench also issued notice to Madhya Pradesh government in the matter as Faruqui’s counsel argued that allegations are ‘vague’.

The bench noted that his arrest did not ‘follow procedure’ under section 41 CrPC. The top court also granted him protection from being arrested by Uttar Pradesh police, which lodged a separate case, by staying the production warrant issued against him.

The High Court had observed that after taking into consideration the material seized and the statements of the witnesses along with the on-going investigation in the matter, no case is made out for grant of bail.

“It is the constitutional duty of every citizen of the country and also of the States to promote harmony and the spirit of common brotherhood amongst all the people of India irrespective of religious, linguistic, regional or sectional diversities and to value and preserve the rich heritage of our composite culture (Article 15A (e) and (f) of the Constitution,” the High Court had said.

Munawar, a resident of Gujarat, was arrested on January 2 in Indore along with four others for making derogatory remarks against Hindu gods during a recent stand-up show. The other arrested persons were identified as Edwin Anthony, Nalin Yadav, Prakhar Vyas and Priyam Vyas.

The High Court had noted that there is possibility of collection of more incriminating material and complicity of other persons cannot also be ruled out.

Faruqui’s counsel submitted before the High Court that he came on an invitation from the organisers of the comedy show and was though present on the spot at the show but did not utter anything as alleged.

“In the light of the statements of the complainant and the witnesses referred above, the seized articles, viz., video footage of the show and the seizure memos detailed above, at this stage it is difficult to countenance to the submissions of the learned counsel for the applicant as complacency of the applicant cannot be ruled out, besides vulnerability of his acts in public domain. It is not a case of no evidence,” said the High Court.

It must be noted that the complainant in the case stated that Faruqui had prohibited recording and asked the audience to surrender their mobile phones before starting his act. Below is the relevant extract as per the witness statement about what Faruqui is reported to have said: