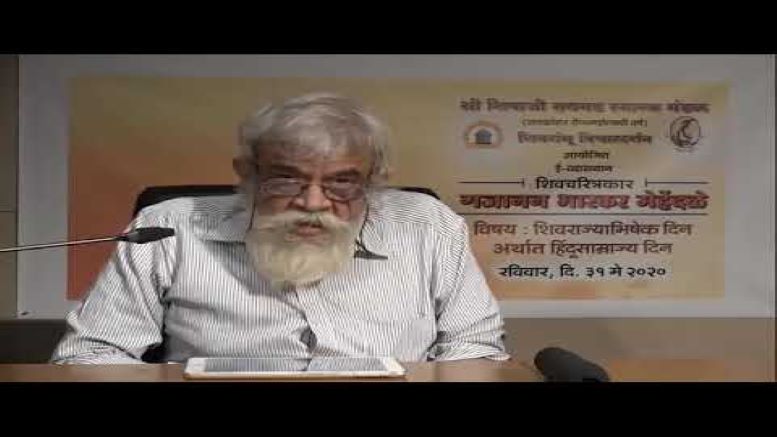 The Hindu Samrajya of Chhatrapati Shivaji Maharaj came as a blessing to Hindus who had been bearing Islamic cruelty for several centuries. It not only gave hopes to several oppressed Hindus but also restored the Hindu pride and inspired several other Hindu dynasties across the length and breadth of Bharat to rebel against the Islamic invaders.

After providing a background (read Part 1 here) to the extremities of the Islamic invaders, which had the sanction of both Koran and Prophet’s acts and teachings, Shri GB Mehandale proceeds to explain how and why was the Maratha Empire a Hindu Samrajya.

Mehandale begins by explaining how Maharaj reconstructed and restored several dilapidated temples that had either fallen out of use during Islamic rule or had been converted to mosques by the Islamists.

Raje set up a Rajvyavaharkosh (official communication dictionary) the preamble of which states that it was set up because the local language had been corrupted by centuries of invasions and that this step was being taken to restore the languages to their former glory.

Another important act of Maharaj that was much ahead of its times and an act beyond imagination during those days was the “Ghar wapsi” (reconversion into Hindu) of Netoji Palkar who had been forcibly converted to Islam by Aurangzeb.

Pointing at a common thread between these three acts of Chhatrapati, Mehandale says it was Maharaj’s Hindu faith. It was also his faith in the Hindu Dharma that led him to support Vedic Brahmans who were given economic support from the royal treasury annually for the Brahmin’s lifetime.

Mehandale further points out that the Rajyabhishek of Maharaj (royal coronation) was carried out as per Vedic traditions and says that those seculars who say that Maharaj faced opposition for the same are overlooking the fact that there is no definite record to prove that such an opposition took place and even if it did, then Raje opting for and going ahead with coronation as per Vedic tradition only re-established the fact that Raje was a true follower of Sanatana Hindu Dharma.

In his letter to his half-brother Ekoji Raje, Maharaj says  “I fight against the Turks (Mehandale points out that Mlechha, Yavana, Turks were all used to indicate Muslims in those days) while you have employed them in your army. How do you hope to win with their support?”

Here the speaker draws our attention to the fact that if Maharaj accuses Ekoji of employing Muslims, it means not many Muslims were employed by him, a fact which has been reiterated by official Maratha records. Those Muslims in his service till 1658 were nominated by Shahaji Maharaj.

1658 is a significant year in Chhatrapati’s life because that was the year when he started doing politics independently. Furthermore, there were not more than five to ten Muslims in his employment. Some of them were employed only to train Maharaj’s Mavalas who lacked military and administrative acumen as the Maratha Empire was in its nascent stages. Here, Mehandale cites the example of a few British being employed by the Bharatiya government right after independence to ensure a smooth transfer of power.

The speaker also negates the argument put forward by seculars which states that Maharaj commissioned the construction of mosques. There are no records to prove that he got mosques constructed and while it is true that inams (land grants) given to certain mosques before he came to the throne were continued, it also equally true that those were stopped in due course of time. On the other hand, there are numerous records of land-grants given to temples, saints, Vedic scholars, and Brahmins.

Shivbharat quotes Ali Adilshah’s opinion about Maharaj in the following words “the numbers of mlecchas are dwindling because of this proud Hindu who has been insulting Yavanas right from a young age”.

Kavi Bhushan states “Shivray is always excited to exalt Hindus and he goes to war with the intention of making this earth free of Mlecchas”.

All those close to Maharaj state in no uncertain terms that the aim of Chhatrapati Shivaji Maharaj was to save Hindus and Hindu Dharma and annihilate the mlecchas.

Testimonies of enemies prove the Maratha Empire was Hindu Samrajya

Henry Remmington, in an official letter written by him, refers to Shiv Chhatrapati as “general of the Hindu forces”. This in itself should put a rest to all doubts and questions being raised regarding the Hindu Samrajya of Maharaj. Nevertheless, providing further proof of why Shiv Chhatrapati’s Samrajya was Hindu, Shri Mehandale narrates the incident of an English doctor.

A doctor in the service of the East India Company (EIC) was going from Mumbai to Junnar as the Mughal officer in Junnar had requested his service for one of his family members. He spent the night in Kalyan which was then under the Marathas and an officer instructed him to spend the night in an unused mosque. The EIC official says that there are many mosques in Kalyan that have now fallen out of use and mullahs and imams are not getting salaries as before because Shivaji Maharaj is a Hindu and has converted most of them into grain storage warehouses.

The Hindu legacy of Shiv Chhatrapati was carried forward by his successors, the foremost of whom was his son Chhatrapati Sambhaji Maharaj. If anything then Chhatrapati Shambu Raje was a stauncher Hindu which is proven both by his acts as well as his official communications.

Chhatrapati Sambhaji Maharaj’s letter to Mirza Raja Jaisingh’s son Ramsingh in Sanskrit states in no unclear terms that the Marathas are fighting for Hindu Dharma while Ramsingh despite his Ikshvaku family lineage was not doing so. Chhatrapati Sambhaji continuing the tradition handed down to him by his father ordered a Muslim to be hanged to death in 1684 in Karwar for having slaughtered a cow.

Rajaram Maharaj, younger son of Shiv Chhatrapati who succeeded Chhatrapati Shambu Raje to the throne, refers to his rule as “dev brahman’s rule” which means the Hindu kingdom.

Nanasaheb Peshwa, who refers to himself as a disciple of Shivaji Maharaj, reconstructed a temple that had been replaced by a mosque after destroying the mosque in the holy city of Trymbakeshwar.

As stated earlier, Chhatrapati Shivaji Maharaj led by example and the Maratha Empire established by him ended centuries of Islamic oppression. Some of the important features of his rise to power are as follows: