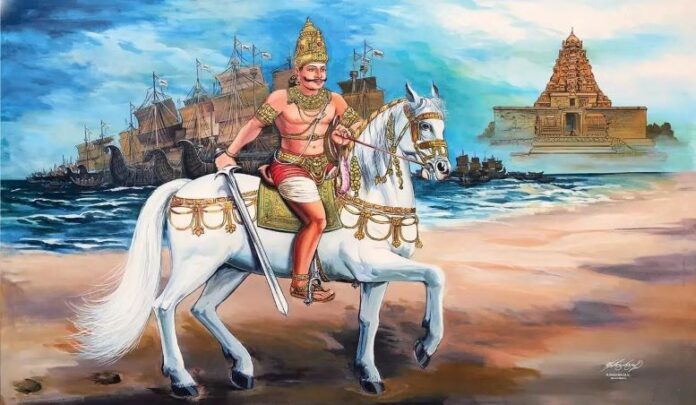 Parakesarivarman Rajendra I Chola was a worthy successor of Rajakesari Rajaraja Chola. Rajendra was declared heir apparent. He benefited greatly by assisting his father in the administration of the empire during the latter’s closing regnal years. Shri KAN Sastri puts the beginning of his reign between 27 March and 7 July 1012 CE while adding that evidence of joint rule is seen in Rajendra’s third year.

Rajendra inherited a vast empire comprising of the pre-independence Madras Presidency and parts of Mysore and Ceylon. The administration of the empire was efficiently managed through a well-organized bureaucracy that he inherited from his father Rajaraja. Rajendra appointed Rajadhiraja as Yuvaraj to assist him in the affairs of the state very early in his reign.

The powerful bureaucracy also enforced all civil rights while the army defended the kingdom and ensured threats of outbreaks in newly conquered territories were put down. The hold over Ceylon and other islands was maintained by the Chola navy which also protected the empire’s overseas trade.

“Rajendra turned these initial advantages to the best possible use and succeeded in raising the Chola empire to the position of the most extensive and most respected Hindu state of his time, and one which possessed though perhaps only for a time a not inconsiderable dominion over the Malay peninsula and the Eastern Archipelago”, writes Shri Sastri.

His campaign against Ila-mandalam (Ceylon) is said to have taken place in 1017-18 CE. Rajendra’s successful campaign brought the whole of Ceylon under the Cholas and made the island a Chola province. Twelve years before this, Rajaraja had taken advantage of the confusion that had arisen from a military revolt against Mahinda V and brought Ceylon (with the exception of the island’s remoter parts) under Chola’s reign.

At a time when a debate has been manufactured to prove Cholas weren’t Hindus, we must point out that it was customary for the Cholas to commission temples, mostly dedicated to Bhagwan Shiva, to celebrate their victories. Rajaraja’s successor was no different and he had several temples constructed. The discovery of many Hindu temples devoted to Bhagwans Shiva and Vishnu near Polonnaruwa confirms this fact. These temples were built of stone in the Chola architectural style.

In 1021 and 1022 CE, the Chola ruler resumed the war against the Western Chalukyas under Jayasimha who had succeeded his brother Vikramaditya V. Though the Tiruvalangadu plates say that the Chola captured Rattapadi, Jayasimha managed to retain his territories up to the Tungabhadra if not beyond.

Rajendra then turned his attention northwards and his northern campaign was in quest of the Ganga. In this regard, the Tiruvalangadu plates note “The light of the Solar race (Rajendra), mocking Bhagiratha who by the force of his austerities caused the descent of the Ganga, set out to sanctify his own land with the waters of that stream brought (thither) by the strength of his arm”.

It must be mentioned that the Tiruvalangadu plates explicitly mention that the expedition was led by one of the king’s generals who met Rajendra on his return somewhere on the banks of the Godavari. At the end of the expedition, Rajendra erected a jalamayam jayastambham (liquid pillar of victory) in his capital with Ganga water in the form of the Cholaganga tank.

The overseas expedition of Rajendra I Chola demands a separate article and we shall learn about his foreign campaigns in a subsequent part.