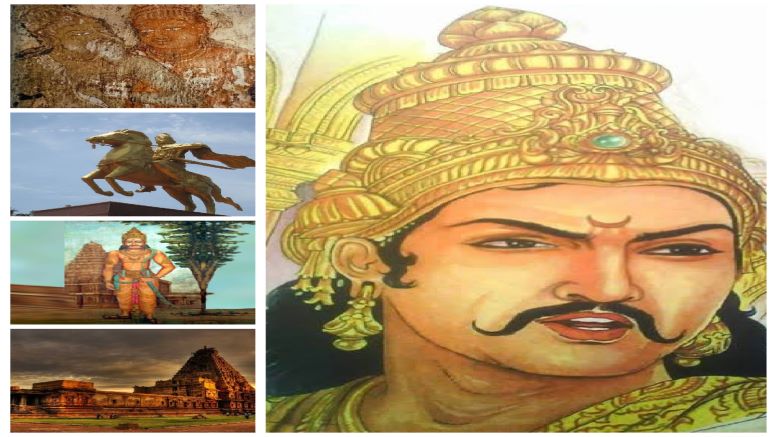 Rajakesari Rajaraja I Chola was as much a connoisseur of letters, arts, and architecture as he was an expert in military strategies and administration as discussed in the first four parts of this series (Read Part 1, Part 2, Part 3 and Part 4 here).

The Cholas in general were known for the architectural marvels they commissioned. They were devout Shaivites who not just constructed but also restored several temples. However, their patronage was not limited to Shaivite temples and included Vaishnava, Buddhist, and even Jaina shrines.

Rajakesari Gandaraditya’s Queen Sembiyan Mahadevi, Rajaraja’s grand-aunt, and his predecessor Uncle Uttama Chola’s mother, is also known to have overseen the restoration of several temples and erected a few as well. She was Rajaraja I Chola’s mentor and he certainly picked up his religious bent of mind from her.

It was customary for Cholas to commission temples, mostly dedicated to Bhagwan Shiva, to celebrate their victories. Rajaraja’s encouragement to artisans brought to life some of the grandest structures that stand as a testimony to their skills to this day. The Sri Rajarajesvaram Koil (temple) is undoubtedly the grandest monument constructed during his reign but there were numerous others that are less discussed yet are equally impressive.

Although there are several temples that were raised by him, we present a few of the architectural wonders of Rajaraja’s reign that are an assimilation of the construction skills and styles of the artisans perfected under the Cholas.

The Rajarajesvaram, which according to Shri SR Balasubrahmanyam (author of Middle Chola Temple) may aptly be described as the “Devalaya-Chakravarti” (Emperor of temples) was commissioned sometime in or around the 19th regnal year of Rajaraja. The construction of this temple was completed in the 25th regnal year.

The srivimana carries the 107 paragraphs long inscription detailing the gifts made to the temple and also the initial order issued by the king. The customary Sanskrit introduction followed by the one in Tamil is recorded in the first paragraph of the inscription.

The temple complex comprises of the srivimana, ardhamandapa, mahamandapa, mukhamandapa and a Nandi-mandapa in front. The garbagriha (sanctum sanctorum) houses a monolithic Linga which is two storeys tall rising to the full height of the garbagriha.

The first tier of the garbagriha walls has been embellished with life-size sculptures of Bhagwan Shiva in different forms while the second tier carries figures of Shiva as Tripurantakar in different poses.

The North, South, and West walls carry six figures each while there are three forms of Shiva engraved on the Eastern wall. The symmetry is disturbed only by the additional sculpture of Nataraja on the Southern wall.

The crowning glory of this grand temple is undoubtedly the breath-taking upward sweeping srivimana that is pyramidal in shape. It outdoes the grandeur of both the Mamallapuram Pallava Shore Temple and the Gangaikondasolapuram erected subsequently by his son Rajendra I Chola.

This architectural, as well as engineering marvel, stands splendidly even today having withstood not just the ravages of nature and time but also the utter misuse it was put through by the British during the Anglo-French wars.

A special mention must be made of the Nandi-mandapa that houses a huge monolithic sculpture of Nandi Bhagwan estimated to be around 25 tons in weight. Its height is approximately 12 feet (3.65 ms), the length is about 19 feet (5.94 ms) and it is around 8.5 feet (2.59 ms) wide.

A mural of Rajaraja and his guru Karuvur Devar along with several others can also be seen within the temple complex. The Sri Rajarajesvaram was one of the most elaborately planned and perfectly executed temples with all the adjuncts in its premises completed during the time of Rajaraja himself. Rajaraja also made elaborate arrangements for its upkeep and administration.

The bell shaped shikara resembles those of the Kadambavanesvarar temple at Narttamalai, the Madagadipattutemple and the Arinjigai-Isvaram at Melpadi which were also raised by Rajaraja.

The figures of Ganapati, Vinadhara Dakshinamurti, Vishnu, Brahma and Durga have been sculpted in temple complex.

The region of Melpadi, part of Parantaka I Chola’s kingdom, was lost in the battle of Takkolam (949 CE) to the Rashtrakutas. It was firmly annexed to the Chola Empire during the reign of Rajaraja.

The temple dedicated to Somanathesvarar dating to the time of Parantaka (I) was rebuilt by Rajaraja and given the name Cholendra-simhesvaram. In this same village, Rajaraja also commissioned the construction of a temple dedicated to his grandfather Arinjaya (Parantaka I Chola’s youngest son) that came to be known as Arinjigai (Tamil for Arinjaya) Isvarattu Mahadevar.

It was at this place or perhaps at a place close by where Arinjaya was believed to have fallen in battle. The temple was constructed sometime in the 25th regnal year as pallipadi (memorial sepulchral temple) at the place where the mortal remains of Arinjigai Devar were buried.

There are two temples in the village of Attur located in the Tirunelveli district. Somesvarar, as it is known today, is an ancient Shiva temple dedicated to Somanathar which was commissioned by Rajaraja immediately after he annexed the Pandyan territory.

The temple comprises of a garbagriha, an antarala and an ardhamandapa with a circumambulatory path and a mahamandapa (covered hall) supported by three rows of six pillars each. Several stone and bronze images typifying the Chola style adorn the temple.

In front of the recumbent figure is an exquisite metal image of Shri Hari Vishnu with four arms, while the two upper arms carry the sankh (conch) and chakra (discus). However, what sets this sculpture apart is the peculiar and rare feature of the other two arms holding the amrita-kalasa (nectar pot).

Polonnaruva on the Habarana Batticaloa road which was earlier known by various names such as Pulastipura, Pulainari and Vijayarajapura was renamed as Jananathapura (Jananatha-mangalam) after it was conquered by Rajaraja I Chola.

A number of Shiva temples were added to the already existing Buddhist and Jain temples here. However, only some of them have survived and “Siva Devale 2”, as it has been designated, is the most significant surviving Shiva temples built by Rajaraja.

It is a dvitala (two-floored) structure facing east and situated in a vast compound. It comprises of a garbagriha and an ardhamandapa, only the basement of which still survives. It is a granite and sandstone structure with an octagonal curvilinear structure.

Another shrine dedicated to Bhagwan Shiva was constructed in the name of his queen Vanavan Mahadevi alias Tribhuvana Mahadevi, mother of Rajendra I Chola. It is possible that this temple was built by Rajendra, who was assigned the charge of managing the southern provinces, during Rajaraja’s reign. This temple was known as the Vanavan Madevi Isvaram.

The Pallikondar shrine (reclining Sri Hari Vishnu) similar to the ones raised in Nelliyappar and other temples built by Rajaraja, was also built within the Vanavan Madevi Isvaram temple.

Rajakesari Arulmozhivarman became Rajaraja the great not just through his military exploits but also because of the administrative reforms undertaken by him. The administrative system he put in place was followed by his successors.

The foundation he laid helped his successors to build an empire that established itself as far away as South-East Asia. He was a man of various facets who gave patronage to artists such as musicians and dancers, artisans such as the sthapatis (sculptors) and Brahmanas (Vedic scholars) in equal measure.

His title “Sivapadasekharan” testifies that he was a devout Shaivite and an upholder of dharma who made no distinction between the Dharmic sects and equally supported every Dharmic denomination.