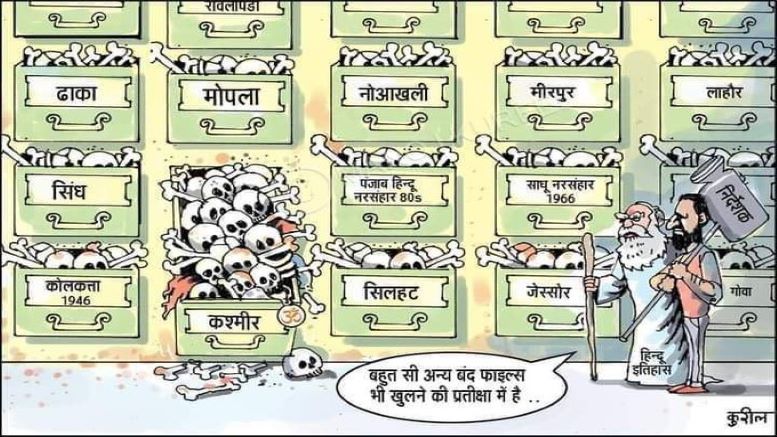 Hindu genocide has long been missing from our history textbooks let alone making it to movie screens and public memory. The success of “The Kashmir Files” provides a glimmer of hope and also indicates that the time is now ripe to bring out the truth of the numerous Hindu genocides that lie buried in the sands of time and political correctness.

We shall take a brief look at some of the horrific instances in history when Hindus were subjected to unspeakable horrors in addition to being systematically wiped out from their native regions only because they followed their faith and refused to give in to the aggressors.

What started on August 20, 1921, continued for the next six months during which time period hundreds of Hindu men, women, and children were murdered, hundreds of women were raped and thousands were converted to Islam at the edge of a sword. Thousands more were left homeless and rendered refugees in their own land. The Malabar Hindu genocide, however, continues to remain absent from the collective conscience of Bharat because the entire episode was simply whitewashed as peasant rebellion.

Congress party’s participation in the Khilafat movement was expected to bring Hindus and Muslims on a common platform against the British, however, because of the history of the region, with Moplah outrages that went as far back as the mid-1800s, the alliance was extremely fragile. The Khilafat Committee meetings would often end up in clashes between Hindus and Muslims.

After one such meeting on March 31, 1921, at the Pannur mosque, a fight broke out with the Moplahs on one side and the Hindu Nairs and Thiyyas on the other. Following this, a gang of Moplahs attacked and destroyed a local temple.

On August 20, 1921, the District Magistrate received information that a number of weapons were stored in a mosque at Tirurangadi. He went there to investigate and, after the searches, arrested Ali Musliar and 2 other collaborators. This event is generally considered the beginning of the Moplah riots.

Runners were dispatched to summon Ali Musliyar’s troops from neighboring villages. To drum up religious hysteria, as it happens even to this day, rumors were spread that the police had desecrated the famous Mambram mosque. But the truth was that the said mosque was on an entirely different side of the river and police didn’t even go near it.

In the beginning, British officers and administrative bodies were attacked; courts and police stations were vandalized; public buildings and records were destroyed; telephone lines were cut; railway stations and bridges were demolished. The civil administration ceased to exist and most villages under Eranad, valluvanad, and ponnani taluks were declared independent and part of a Khilafat kingdom.

Once the British administration was driven out, the Moplahs turned their full attention to their old foes, the Hindus of Malabar. Murders, dacoities, forced conversions, and outrages on Hindu women became the order of the day. Hundreds of temples were razed to the ground. Hundreds of Hindus were murdered. Thousands were converted under the threat of the sword.

Partition of Bharat has been one of the most painful and bloodiest chapters of world history where lakhs of Hindus were killed in cold blood in addition to millions of others being driven out of their homes. A genocide such as this should have shaken the conscience of the world.

Sindhis and Punjabis, in particular, had to bear the maximum brunt of this partition. It is only a separate “Sindh Files” that would do justice in bringing out the trauma suffered by this mercantile community.

Talking of Punjabis, there is a need to document the dark period of terrorism that engulfed the state. “35000 Sikh & Hindu Punjabis including the Police force sacrificed their lives in the fight against terror in Punjab yet the only literature/movies created have blatantly ignored the real victims of that fight and continue to glorify terrorists and their aides. The pain and torment suffered by the people of Punjab and those 35000 families need to be brought to light”, writes MP Ravneet Singh Bittu.

MK Pahwa, a refugee from Pakistan during Partition who witnessed first hand the horrifying bestiality and savagery on Hindus and Sikhs by the Muslims during Partition, recounts:

I reached a place called Fazilka, in Indian territory, and discovered that another refugee column in which my father and other relatives had set out had fared much worse. They had been attacked by Muslim mobs on their way: Only 40 or 50 had survived out of 400 or 500.

I saw women with their breasts, noses, ears and cheeks cut. One of them told me how her child was roasted and she was asked to partake of the same. Another was ravished in the presence of her husband who was kept tied to a tree.

By January of 1948, over 7 million Hindu and Sikh refugees were forced to flee to Bharat, and more than 1 million were concentrated in Delhi. But instead of finding relief in land of their brothers, Hindus and Sikhs were subjected to a humiliating and dehumanizing experience.

They were herded like cattle in barbed-wire enclosures, and so overcrowded that those who came after had to live in street and under trees in cold winter. As they began to wander the streets of Delhi in search of food and shelter, the refugees were horrified.

Then they realized that the Indian government was not going to raise a finger to aid them, at the special behest of “Bapuji” Driven by sheer desperation, the Hindus and Sikhs started occupying public places such as Mosques to escape the torturous weather.

And wonder of wonders, instead of assisting them, the Congress government deployed police violence, thrashing and beating down the refugees to bar them from “offending Muslim sensibilities” while Hindus and Sikhs by the millions suffered unprecedented genocide and slaughter.

They were forced at sword point to abandon their ancestral properties and flee, the Congress Government was busy ensuring that these same refugees were treated like garbage in contrast to the protection that Muslims in Bharat were enjoying. It was as though the floodgates of a dam broke open, and the desperate refugees fought the Muslims to salvage their own survival.

Salt was rubbed on the wounds of the Hindu and Sikh refugees, when on January 12, 1948, Gandhi announced an indefinite fast based on 7 conditions including a demand to pay 55 Crores to the very Pakistanis. While the Muslim-appeasement of Congress continues to this day, this episode has been brushed under the carpet by the Congress-Marxist historians’ alliance.

Hindus of Bengal continue to be treated as non-entities by appeasers of Islamists. The state has witnessed numerous such instances when the so-called majority population was butchered – from Great Calcutta Killings on Direct Action Day to Noakhali to the 1971 East Pakistan genocide.

Jinnah, to put pressure on the British government and Congress, declared August 16, 1946, to be “Direct Action Day”. As Muslim League ruled only one state of Bharat i.e. Bengal, it was there it decided to show the power of its “Direct Action”.

The unofficial plan was to re-enact the Battle of Badr, which had taken place on the 18th of Ramzan. In 1946, the day coincided with August 16. Syed Muhammad Usman, the then-mayor of Calcutta, published a leaflet that said: Kafer! Toder dhongsher aar deri nei! Sarbik hotyakando ghotbei! (Hindus! Your destruction is not far away! You will be massacred!)

The riots started immediately after the meeting held by Suhrawardy was over. Muslims returning from the meeting killed Hindu shop owners who had kept the shops open, burnt properties of Hindus, and started a reign of terror in Calcutta. The worst killings happened on August 17.

The Islamic terror that was unleashed in August reached a peak on October 10, 1946, when the Naokhali Hindu genocide took place. Villages after villages of the Hindus were set afire; men, women, and children were slain by the riotous armies of the Miya and Kasem. Hindu temples were gutted down. To add insult to the injury, Hindus were forced to slaughter cows and eat beef.

The 1971 East Pakistan genocide is equally heart-wrenching if not more. Pakistani forces along with the Urdu-speaking co-conspirators and Razakars conducted scores of killings. Women were violated and raped in front of their husbands who were subsequently put to death.

The unaccounted story of mass Hindu genocide in the erstwhile state of Hyderabad under the Nizam also needs to be taken to the masses. The Nizam commissioned the formation of MIM’s paramilitary wing Razakars under Kasim Rizvi who were given sweeping powers to suppress Hindu uprisings and movements using whatever means possible.

On obtaining the Nizam’s nod, the Razakars resorted to the ethnic cleansing of Hindus in rural Telangana. They were committed to the cause of converting Hindus en masse to Islam. The Razakars went from one village to the next and mass-murdered, raped, and kidnapped several Hindu villagers.

“On entering the village premises, the Razakars stripped Hindu girls off their clothes and paraded them naked, followed by making them dance to their tunes as a sign of submission and surrender to Islamic superiority. Hindu women were raped mercilessly with the men shot dead. Several villagers jumped into open wells present in agricultural fields to escape the terror. Many temples were also plundered by the Razakars”, says OpIndia.

Hindu and Sikh minorities of Afghanistan

Another genocide that is never talked about is the complete and systematic religious cleansing of Hindus and Sikhs in the Islamic nation of Afghanistan from the 1970s onwards.

“Afghanistan is an Islamic republic, in which most citizens follow Islam. According to The World Factbook, Sunni Muslims constitute between 82.7 -89.7% of the population, and Shia Muslims between 10–17%, 0.3% follow other minority religions. The current population of Afghanistan is 3.9 crores as per latest United Nations data”, HinduPost had highlighted in April last year.

A 2016 report by TOLO News says “Close to 99 percent of former Hindu and Sikh citizens of Afghanistan have left the country over the past three decades”.

“An investigation by TOLOnews reveals that the Sikh and Hindu population number was 220,000 in the 1980s. That number dropped sharply to 15,000 when the mujahideen was in power during the 1990s and remained at that level during the Taliban regime. It is now estimated that only 1,350 Hindus and Sikhs remain in the country. According to our findings, the main reasons behind their departure include religious discrimination and the government’s neglect of the minority group, during the Taliban era in particular”, the report further notes.

That number dropped further and a 2020 report by The Indian Express noted that less than 700 Sikhs and Hindus remained in Afghanistan with 650 odd Sikhs, the rest being Hindus.

We have merely touched the tip of the icebergs with several such stories of genocide still missing from the history books and public eye. Leaving in denial will neither ease the pain nor erase the truth.

Some truths must be told no matter how inconvenient they are because the truth should never be sacrificed at the altar of political correctness!

CPM govt. about to hand over temple lands in Malappuram to encroachers?