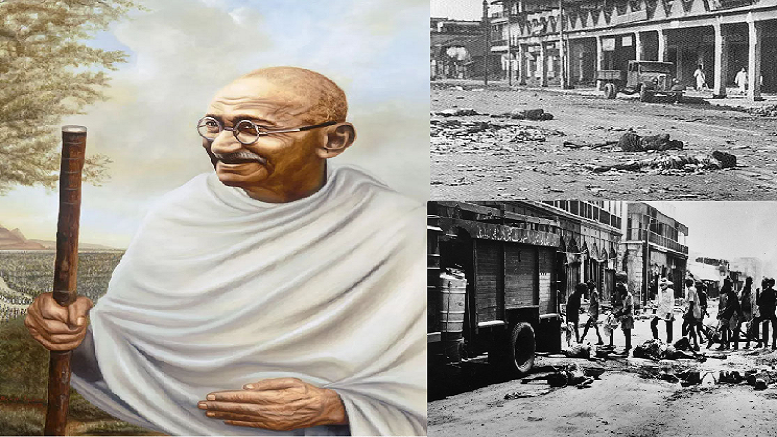 To know the truth about Gandhi, one must listen to the eyewitness account of MK Pahwa, who was a refugee from Pakistan during Partition. He witnessed first hand the horrifying bestiality and savagery on Hindus and Sikhs by the Muslims during Partition.

Pahwa recounts the spectacle of the millions of Hindu and Sikh refugee caravans thus:

“We walked night and day. There were men and women of all ages and all conditions. Many could not stand the strain. They-mostly women and children-were left on the road.”

“I reached a place called Fazilka, in Indian territory, and discovered that another refugee column in which my father and other relatives had set out had fared much worse. They had been attacked by Muslim mobs on their way: Only 40 or 50 had survived out of 400 or 500.”

“My aunt had been killed, more than a hundred girls were abducted, and my father rescued from a heap of the dead.”

While in Fazilka, Pahwa saw other refugee columns coming in; one of them 40 miles long where marched 500 women who had been stripped naked.

“I saw women with their breasts, noses, ears and cheeks cut. One of them told me how her child was roasted and she was asked to partake of the same. Another was ravished in the presence of her husband who was kept tied to a tree.”

By January of 1948, over 7 million Hindu and Sikh refugees were forced to flee to Bharat, and more than 1 million were concentrated in Delhi. But instead of finding relief in land of their brothers, Hindus and Sikhs were subjected to a humiliating and dehumanizing experience.

They were herded like cattle in barbed-wire enclosures, and so overcrowded that those who came after had to live in street and under trees in cold winter. As they began to wander the streets of Delhi in search of food and shelter, the refugees were horrified.

They found that the Muslim citizens of Delhi were in contrast being provided with rations, funds, jobs and shelter. Depression from the abject starvation, freezing temperatures, lack of shelter and disease on the part of the refugees gave way to a black despair.

Then they realized that the Indian government was not going to raise a finger to aid them, at the special behest of “Bapuji” Driven by sheer desperation, the Hindus and Sikhs started occupying public places such as Mosques to escape the torturous weather.

And wonder of wonders, instead of assisting them, the Congress government deployed police violence, thrashing and beating down the refugees to bar them from “offending Muslim sensibilities” while Hindus and Sikhs by the millions suffered unprecedented genocide and slaughter.

They were forced at sword point to abandon their ancestral properties and flee, the Congress Government was busy ensuring that these same refugees were treated like garbage in contrast to the protection that Muslims in Bharat were enjoying. It was as though the floodgates of a dam broke open, and the desperate refugees fought the Muslims to salvage their own survival. Can one imagine a more shameful and outrageous situation than this?

And what was the “Father of the Nation”, the apostle of peace, the prophet of Ahimsa doing while millions of our Hindu and Sikh brothers, sisters and children bled to death in their own land? He was busy exhorting “Hindu culprits” to maintain “communal harmony”.

The genocide and massacre of Hindus and Sikhs at the hands of Muslims were to be forgotten. On January 12, 1948, the great Mahatma, announced an indefinite fast based on 7 conditions, which included a demand to pay 55 Crores to the very Pakistanis.

The very Pakistanis who had reduced millions of Hindus and Sikhs to a pile of bones and burning, stinking flesh. Not only did he want Bharat to “forget” about the 300 Crores that Pakistan owed us, but over and above that he wanted Bharat to pay 55 Crore Rupees to them.

Every condition laid down by Gandhi for giving up his fast was against the very nature of humanity. But this was not all, among other 6 conditions, yet another condition was that all the Muslims who had left Bharat, must be taken back.

And all the mosques occupied by the dying Hindu and Sikhs would be vacated by force. Not only this, each and every Muslim who would be brought back from Pakistan would be provided food, clothing and shelter, even if at the expense of evicting Hindus and Sikh residents.

Imagine the shock, grief and utter disbelief that gripped those dying refugees as they saw this insane version of “Bapuji’s justice” being perpetrated on their wounded and tattered beings. It is a testament to the supreme self-control and humanity of those people tThat they did not tear Gandhi to shreds, that very day.

The only protest they allowed themselves were angry shouts of “Gandhi-ko marne do. Ham ko makan do” (Let Gandhi die, just give us shelter.) Those refugees were not murderers, plunderers or “Hindu fanatics”, they were the ancestor of today’s Bharatiyas like you and me.

By January 16th, the Congress led by Nehru gave in to the Mahatma’s demands. The cabinet decided to transfer the money to Pakistan “as a gesture of goodwill”. An inter-communal peace committee was set up.

By the 18th it could convince the Mahatma that the necessary change of heart had taken place in Delhi to enable him to break his fast. By the 20th evening he was back on the lawns for “all-faith” prayer meetings.

If Mahatma Gandhi were alive today, we would ask this man, “Do you know what drove men steeped in the tolerance of Hindu Dharma to take on the mantle of fanaticism?” Why do the history textbooks which still guide the children of Bharat today, not ask this question?

Why do the newspapers that spill over with headlines denouncing “Hindutva fanatics” not ask this? And last but not least, why do we Bharatiyas who inherited the horror of knowing that millions of us were subjected to the most heinous form of injustice by his actions, still keep quiet when we hear that insufferable phrase “Father of the Nation”?

It is hard, so hard to give up our sacred icons, but it is truth alone which deserves to be enshrined as an ideal, not flawed mortals like Mohandas Karamchand Gandhi.