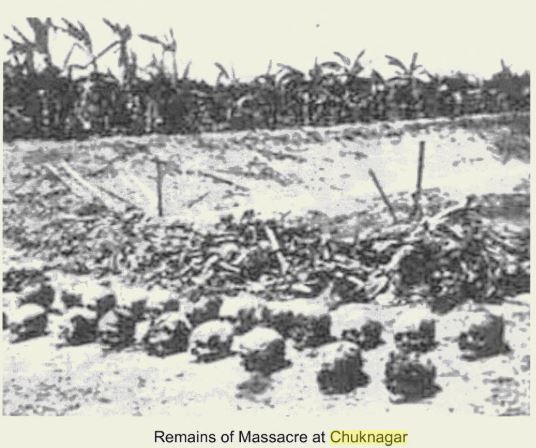 Last week, we observed the 50th anniversary of an almost forgotten genocide committed against Hindus or rather humanity. On 20 May 1971, Pakistani army had unleashed such violence against Bengali Hindus that it can put most cold blooded killers to shame.

Anywhere between 1000 to 10000 people had died that day in a small unknown town called Chuknagar, at Dumuria of Khulna district, East Pakistan (today’s Bangladesh). The exact numbers are fuzzy till date due to various reasons but according to one Muslim eye witness Abul Bashar, he had found 44 manual labourers who had disposed off the dead bodies at the behest of the Pakistani army. The army had paid them two annas per body. Each labourer claimed to have disposed of at least 100 bodies. That gives a figure of 4,400 people killed. Abul Bashar nonetheless claims the figure is closer to 10,000, since many bodies were also washed away. Regardless of the number of deaths, a massacre had indeed occurred.

In 1971, trouble was already brewing in then East Pakistan. The West Pakistani hegemony was unacceptable to Bengalis who despite being equal in numbers and economy, were being pushed down by racially and religiously more fanatic people of Pakistani Punjab. Things came to a head after Pakistani army’s brutal suppression of Bengali nationalists.

The most vulnerable of the lot were Bengali Hindus since they were being singled out both by Pakistani army and Bengali/Bihari Razakars (private Muslim militias). Journalist Anthony Mascarenhas narrates what he saw himself in East Pakistan since he was deputed by Pakistani army itself to report positively on it. What he saw there turned his worldview upside down and he decided to narrate the real story of Pakistanti atrocities on Hindus and Bengalis.

In one incident, he narrates that he was with a Pakistani army officer Major who was about to shoot a 24 year old on ‘suspicion’ of being Hindu. When he asked the Major why he wants to shoot the man, the officer replied “Because he might be a Hindu or he might be a rebel, perhaps a student or an Awami Leaguer. They know we are sorting them out and they betray themselves by running.”

“But why are you killing them? And why pick on the Hindus?” Mascarenhas persisted.

“Must I remind you,” the Major said severely, “how they have tried to destroy Pakistan? Now under the cover of the fighting we have an excellent opportunity of finishing them off.”  “Of course,” he added hastily, “we are only killing the Hindu men. We are soldiers, not cowards.”

Later on Anthony Mascarenhas described his experience in the following words –

For six days as I travelled with the officers of the 9th Division headquarters at Comilla I witnessed at close quarters the extent of the killing. I saw Hindus, hunted from village to village and door to door, shot off-hand after a cursory “short-arm inspection” showed they were uncircumcised. I have heard the screams of men bludgeoned to death in the compound of the Circuit House (civil administrative headquarters) in Comilla. I have seen truck loads of other human targets and those who had the humanity to try to help them hauled off “for under the cover of darkness and curfew.

I have witnessed the brutality of “kill and burn missions” as the army units, after clearing out the rebels, pursued the pogrom in the towns and the villages. I have seen whole villages devastated by “punitive action.”

On the other side, the Bengali Razakar, the Muslim militias, were preying on Hindus and nationalist Bengalis and informing on their presence to the Pakistani army. It was not even an ideological pursuit for many of them. To them, fewer Hindus meant more land, business and money for Muslims. So rich, successful Hindus suddenly found themselves expelled from very homes they built, farms they owned and shops they opened, on allegation of being a ‘traitor to Pakistan’ by these Razakars.

Thus hounded by Pakistani army & Razakars, the chances of Hindus survival were becoming more bleak by the day. Eventually, a large contingent of Hindus decided to leave for Bharat, at least temporarily if not forever. The villagers of Khulna, Bagerhat, Satkhira, Jessore and Gopalganj districts gathered at Chuknagar. On 20 May, it was a festival day but there was no festivity in the air at Chuknagar. The Hindus, already persecuted by local Razakars were dreading violence by Pakistani army and whatever money they had, they were using it for passage to Bharat apart from buying basic necessities.

A red Jeep came in the morning in the bazaar and asked Muslims sitting there “Where are the malayuns?” (Malayuns or malauns is a derogatory term used by Muslims for a Bengali Hindu, meaning “accursed” or “deprived of God’s Mercy”). Later at 10 AM, people heard army vehicles arriving and before anyone could realise what was going on, shooting began and it went on intermittently for 5 hours.

Armed with light machine guns and semi automatic rifles, the Pakistani armymen let loose hell on unarmed Hindus. Anyone who came in their sight was shot dead, provided he was a Hindu. Many Muslims as well were killed in confusion or on suspicion. Lot of people jumped in the river Padma to escape the violence but the Pakistani soldiers kept firing on whoever surfaced for breath. Naturally, many of them did not survive. Professor Mamum who interviewed some survivors of this holocaust narrated that the bodies of lifeless children were seen slung over laps of dead mothers. They saw fathers trying to shield their daughters from bullets with their own bodies.

Later, the armymen rounded up those who were hiding and asked them to recite kalima (Muslim prayer/confession of faith). Those who could not recite kalima on order, were shot dead at point blank range. Those who could, were stripped and double-checked for circumcision. All uncircumcised Hindus thus caught were immediately shot dead. After the bullets were finished, the butchers of Chuknagar finished the job with bayonets.

An eye witness who survived the massacre, ABM Shafiqul Islam said “There were bodies over bodies, numerous bodies. I did not get any room to step out evading the blood-stained bodies.” Abdul Haque, who was a student at that time, said “I briefly halted at one place when I saw a female baby was trying to have milk from her deceased mother’s breast. I was shouting and crying. I would not forget this scene in my life” he said with tearful eyes.

In later discussions, it was speculated that it was local Muslims who had called in the army on unarmed Hindus so that they could loot money & jewellery from them. Since Hindus were crossing over to Bharat probably for good, they were travelling light. They had liquidated all their assets that they could; despite official sanctions against anyone purchasing property from Hindus. Thus they were carrying most of their life savings in cash or gold on their person. This was too big a temptation for the local Muslims to pass and they turned on their own compatriots. It was double jeopardy for the Hindus who had always considered the land and its people as their own but now in the most vulnerable time of their lives, they not only lost their land but were also betrayed by their neighbors, their friends, their compatriots.

Unfortunately, this massacre was neither the only one nor the biggest. The present day Bangladesh is littered with places soaked with Hindu blood that was spilled in 1971. Dhaka’s Hindu colony massacre of Shakharipatti, Jathibhanga massacre of Rajbanshi Hindus, Shankharibazar massacre, all these incidents remind us of troubled times Bangladeshi Hindus endured. Despite all these atrocities, the Hindus of Bangladesh are still paying a price for living in their ancestral land.

Did economic jihad take the life of dentist Dr. Krishnamurthy in Kasaragod, Kerala?