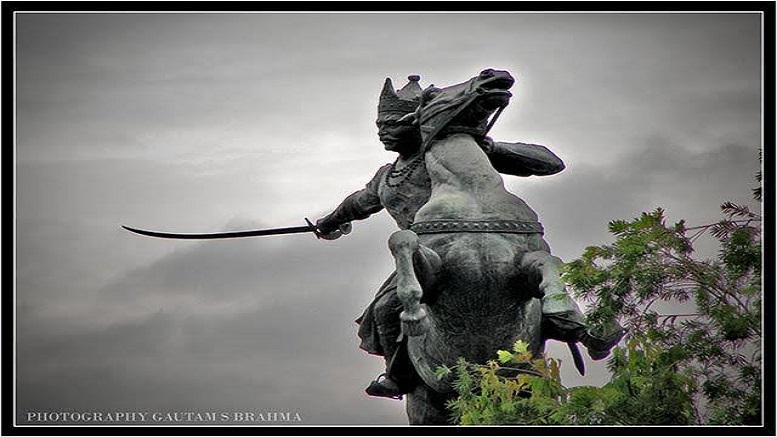 Chilarai, the Great General of Koch Kingdom is a symbol of the might and valour of great Koch Dynasty. Perhaps, Chilarai was the greatest general that Bharatiya history ignored.

Born in 1510 CE, Chilarai was the third son of Maharaja Biswa Singha (1523–1554 CE). He was the younger brother of King Nara Narayana, and was also known as Shukladhwaj. He was a great General who belonged to the Royal Koch dynasty of Assam.

Shukladhwaj got his name Chilarai because, as a general, he executed troop movements that were as fast as a chila (kite). By his valour, he played a significant role in expanding the empire of his elder brother, Maharaja Nara Narayan.

His valour ensured Koch supremacy over the Bhutia, Kachari kingdom and the Ahoms though several battles were fought between the Kochs and Ahoms with countable victories for both sides.

The Koch dynasty ruled regions in the eastern part of the Bharatiya subcontinent, mainly the regions of Assam and Bengal; it is named after the Koch community who emerged as the dominant ruling house in the Kamata kingdom in 1515 after the fall of the Khen dynasty in 1498.

The first of the Koch kings, Viswa Singha and then his sons, Nara Narayan as the subsequent king and Chilarai as the general, soon occupied the western portion of the erstwhile Kamarupa Kingdom as well as some regions of south Assam.

The dynasty later forked into two major branches that controlled Koch Bihar and Koch Hajo. Koch Bihar became an ally of the Mughals, whereas Koch Hajo came under Ahom control and was subsequently absorbed.

Koch Bihar became a princely state during British rule and was absorbed after Bharat’s independence. The third branch of this dynasty at Khaspur disappeared into the Kachari kingdom.

Chilarai was instrumental in giving Srimanta Sankardeva protection and shelter, as well as marrying his niece Kamalapriya (alias Bhubaneswari). It was only due to his Royal Patronage that Sankardeva was able to establish the Ek Saran Naam Dharma in Assam and bring about his cultural renaissance. His son and grandson were responsible for breaking away of Koch Hajo from the parent kingdom.

Chilarai was a master military strategist, he was the commander of elder brother and Koch king Naranarayan’s army. In June 1563, the Koch under the command of Chilarai managed to occupy the capital of Ahom, Garhgaon.

Several kings, namely the then Raja of Manipur and the Khasi chief Viryyavanta, submitted to the Koch army. Chilarai and his army also vanquished and killed the Jaintia Raja, and Rajas of Tippera (Tripura) and Sylhet.

Chilarai is said to have never committed brutalities on unarmed common people, and even those kings who surrendered were treated with respect. Chilarai also adopted guerrilla warfare successfully, even before Shivaji, the Maharaja of Maratha Empire did.

Chilarai also turned his attention towards upholding of religion and culture. He rebuilt the Kamakhya temple at Guwahati, which had been destroyed in a Muslim invasion. The temple of Kamakhya is an important Shakti Peetha, attracting lakhs of devotees each year. Later on, his son Raghu Deb rebuilt the similarly destroyed temple at Hajo in Assam.

In the due course of time, Nar Narayan recognised Chilarai as a ruler of the northern banks of the Brahmaputra. A temple was also built by him here during the course of his campaign. But disaster struck the kingdom when the Afghan sultan of Bengal attacked, with the powerful general Kalapahar leading his armies. Chilarai was unfortunately captured by the Afghan Sultan Suleiman Karrani, but later released.

A few years later Akbar attacked Bengal and the Koch kingdom allied with him in this invasion. The ensuing battles finished the Afghan Sultan’s rule over Bengal. Unfortunately, around this time (1577 CE), Chilarai died of smallpox on the banks of the Ganga.

(This article has been compiled from the tweet thread of @JajaborManas, a Wikipedia article and this research thesis)