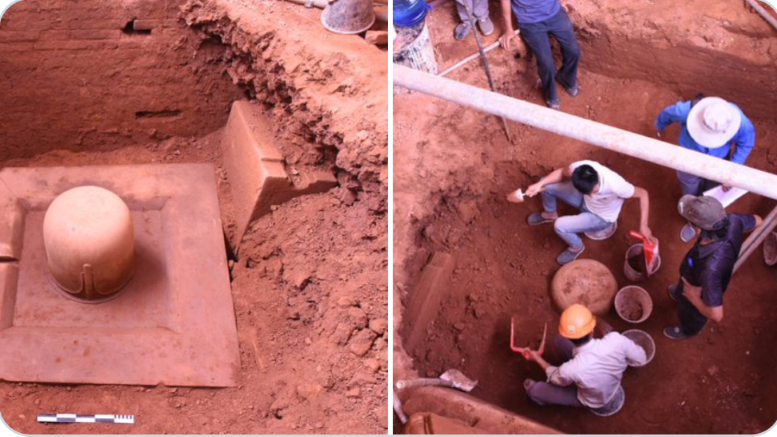 The discovery of a 9th Century Shiv Ling at the Cham Temple Complex in My Son, Vietnam by the Archaeological Survey of India (ASI) during restoration work has reaffirmed the civilizational connect between Bharat and South-East Asian countries and the spread of Hindu Dharma beyond the borders of Akhand Bharat. External Affairs Minister (EAM) Dr. S Jaishankar made the discovery public through his Twitter account while applauding the effort of the ASI team.

Cham Temple Complex, located in My Son in Vietnam’s Quang Nam Province, is a UNESCO World Heritage Site housing a cluster of abandoned and partially ruined Hindu temples dedicated to Mahadev, who is known by various names locally of which Bhadreshvara is the most important.

The current restoration work is a part of annual restoration and conservation work carried out by ASI. ASI has already restored temples in two different groups in the previous three seasons and currently a four member ASI team is working on the third group of temples in the fourth season which is scheduled to run from January to June. This Shiv Ling belongs to the reign of Indravarman I.

Hindustan Times report quotes an unnamed official who has said that previously six other Shiv Lings were discovered in this complex but this one is the most magnificent as it is a monolithic sandstone structure with decorative patterns of very exquisite cultural value.

The temple complex was first discovered by French archaeologists in 1903-04 who had affirmed the presence of Shiv Ling here but due to limited means at their disposal were unable to recover the same. Later Vietnam was under the grip of political disturbances and wars which not just brought the conservation activities to a halt but also destruction of large parts of the complex due to bombing by the US Army.

The ongoing restoration efforts are a part of the current Bharatiya government’s efforts to undertake culture and heritage conservation projects abroad. With this purpose in mind, the EAM set up Development Partnership Division (DPA-IV) in January to coordinate all such overseas efforts, act as an archive of all the projects undertaken by it and disseminate information regarding such projects.

The Hindu history of the Cham people ruled by Champa (Sanskritised word for the Cham people) kings is fascinating. This kingdom dominated Southern Vietnam both politically and culturally for a period of thousand years from the 4th to the 14th Century CE. This dynasty built several temples dedicated to Hindu deities like Sri Krishna and Sri Hari Vishnu but maximum temples were in built in honour of Bhagwan Shiva as Shaivite Hindu Dharma was the official state religion.

My Son is an important monument of the Champa kingdom which is a complex comprising of eight groups of 71 temples. The temple complex is believed to symbolize Mount Meru considered to be the home of Hindu Devis and Devtas. It stands witness to an exceptional cultural exchange where the indigenous people adopted Hindu culture and religion as their own and internalised it. The earliest historical evidence discovered at My Son belongs to the era of Bhadravarman I (380-413 CE) who established the Bhadreshvara Shiv Ling in the first year of his reign in 380 CE.

His inscription carries a warning to his descendants not to destroy what he has created and given and asks them to protect and maintain them in reference to the temple and Lingas erected by him. His inscription clearly says “I who know the four Vedas erect this Linga Bhadreshvara. Out of compassion for me don’t destroy my gifts. If you destroy, all your good deeds in your different births shall be mine and all the bad deeds will be yours”.

Today, there are only around 60,000 Cham Hindus left in Vietnam. Cham advocacy groups say that both Hindu and Muslim Chams have experienced religious and ethnic persecution and restrictions on their faith under the current Vietnamese government. Some Hindu temples were turned into tourist sites against the wishes of the Cham.

One hopes such excavations and focus of Bharat’s EAM towards overseas culture and heritage conservation projects translates into more awareness among Bharatiyas towards Cham issues. It is also time the wonderful Hindu history of South East Asia and glorious empires like Champa, Khmer, Srivijaya and Majapahit find their way into Bharat’s history books.