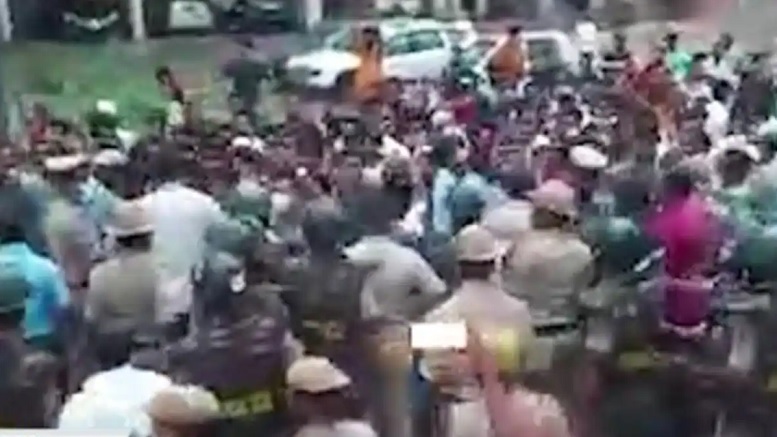 Nine police personnel, including Puttur Deputy Superintendent of Police Gana P. Kumar, were injured on December 14 when hundreds of Popular Front of India (PFI) activists went on a rampage at Uppinangady police station to try and forcibly free persons detained in connection with an assault case in Dakshina Kannada district, Karnataka. The attackers violated Section 144 and also took refuge in a mosque from where they pelted stones on police and damaged public property.

The PFI activists began to gather in front of the station since December 14 morning after their colleagues Mohammed Zakaria, Mustafa and Hamid were summoned for questioning for the December 6 assault on two fish merchants and a buyer in the town.

On December 6 night, Mohan Das and his brother Ashok, sons of Anni Shetty, were selling fish to Mahesh. Suddenly, 20-25 youth arrived on bikes and in a car and attacked them with swords and rods near Subramanya Cross of Uppinangady. The accused were speaking in Byari language (a language spoken by Muslim communities of Karnataka and North Kerala) and were addressing each other as Naushad, Rauf, Shair, Ashraf and Rashid. All 3 victims suffered grievous injuries – Mohan Das on his head and chest, Ashok on his right hand and back, Mahesh on his right ear and cheek.

On December 13 night, police had arrested Mohammed Sinan. Based on information given by him, they had summoned the others involved in the attack.

They were ordered to disperse after Section 144 was imposed by the Tahsildar around 7 pm. Even so, people started gathering again around 9 pm outside the police station and the police informed them about the restrictions and violations.

The protestors were joined by PFI cadre from Puttur, Bantwala and Belthangady, who shouted slogans against the police and attempted to enter the station armed with sharp weapons. When Sub-inspector Omana and other women police personnel attempted to stop them, they were assaulted by the activists.

Police used canes to disperse the mob. In response, some of the PFI activists took out weapons and empty soda bottles from an ambulance parked nearby and attacked them.

Bantwala PSI Prasanna Kumar was stabbed on his palm while DySP Gana P. Kumar was injured in stone-pelting. The activists then retreated into a nearby mosque while continuing to pelt stones, damage vehicles and other public property. Other injured police personnel include Circle Inspector Umesh Uppalike, PSI Omana, Kiran Kumar, Renuka, Sharief Nadaf, Sheshadri and Harish, according to a statement from the police.

Superintendent of Police Rishikesh Sonawane said Uppinangady town had witnessed group clashes, which turned into communal clashes, last week. “PFI activists had no business to lay siege to the police station as there are courts to decide on the police action [of earlier arrests],” he told The Hindu.

Use of Ambulance, Mosque – well-honed tactics of Islamists

Using an ambulance to store weapons, and retreating into a mosque to regroup after police lathi-charge are the hallmarks of a professional terror group. PFI knows police will think dozen times before entering a mosque, as that will allow them to peddle the ‘blasphemy’ and ‘Islam under attack’ tropes.

Any police action against an ambulance also makes for great PR to show ‘police brutality’. And that is exactly what PFI handles are now doing on social media

PFI is now claiming that Uppinangady Police resorted to “unprovoked attacks” after its members were “protesting peacefully”. It has called for a statewide protest on Wednesday to condemn “police brutality”.

PFI cadre had also attacked a police station during the pre-planned Bengaluru riots, which occurred just a week after the Bhumi Pujan ceremony for the new Ram mandir at Ayodhya. The trigger was alleged blasphemy by a Dalit Hindu man, the nephew of a Congress MLA. Using ‘blasphemy’ as a tool to whip up Muslim passions and unleash violence is a favorite tactic of Islamists across the world.

PFI is a radical Islamic organization which started in Kerala, but now has spread its tentacles across the country. Many of its cadre were earlier with the now-banned SIMI (Students Islamic Movement of India) founded by JIH (Jamaat-e-Islami Hind).

PFI has been involved in several terror plots, and carried out targeted attacks like Prof. TJ Joseph’s hand-chopping for ‘blasphemy’, instigating and funding anti-CAA riots in Delhi and West UP. It was also involved in the anti-CAA rioting that rocked Mangaluru in Dakshin Kannada in December 2019. Earlier this year, two PFI operatives were arrested and explosives seized for plotting terror attacks on Basant Panchami.

Through Islamic dawah and conversion centers like Sathya Sarini (aka Markazul Hidhaya), PFI-linked Islamists brainwash Hindu and Christian girls to convert to Islam, post which some of them are sent as brides for Islamic State terrorists in Middle-East and Afghanistan. In the infamous Hadiya (Akhila) case too, it was PFI that pulled the strings and paid big money to top Lutyens’ lawyers like Sibal (INR 77 lakhs), Indira Jaising and Dushyant Dave to represent them in Supreme Court, eventually succeeding in proving that her ‘marriage’ to PFI worker Shafeen Jahan was genuine.

PFI’s political arm SDPI (Social Democratic Party of India) has allied, either openly or tacitly, with ‘secular’ parties like Congress and CPM at various times. Its student outfit is CFI (Campus Front of India). PFI Chairman E Abubacker was also the Founder President of SDPI, former State President of SIMI, Founder Member of the mainstream Muslim body AIMPLB (All India Muslim Personal Law Board). Incidentally, Asaduddin Owaisi is also on the AIMPLB board and the organisation has supported Taliban.

In 2017, Bharat’s premier investigative agency NIA recommended that PFI should be banned as it is involved in terror acts.