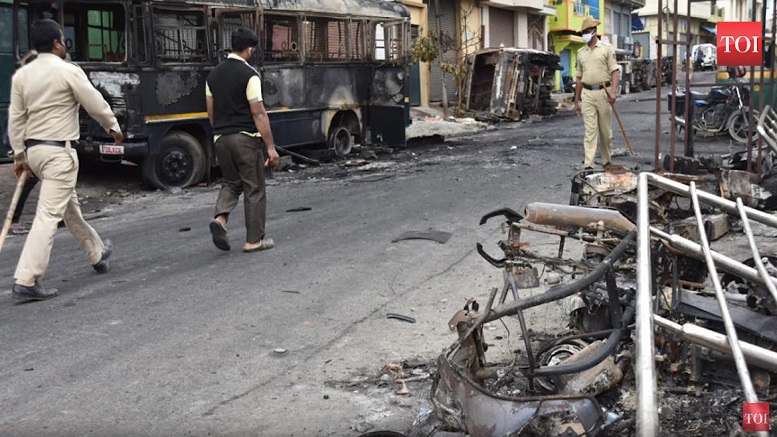 A fact finding report about the Bengaluru riots by the NGO “Citizens for Democracy” has made some shocking revelations. According to the report, the riots were a pre planned conspiracy against Hindus of the area. The report claims that the facebook post of P. Naveen was just a pretext and Muslim mob had made preparations for riots since at least a fortnight ago. The primary purpose was to convert the area in a Muslim majority ghetto, a strategy which the report terms “land jihad”.

Citizens for Democracy is a Bengaluru based NGO founded in 2011. In the past the NGO has  created “awareness on
injustice done to the people of Jammu and Kashmir, Political killings in Kerala, Killings of many socio-political activists in Karnataka, religious hatred that resulted in killings of innocent people in West Bengal etc.” and also voter awareness programmes before 2014 and 2019 elections. The members of the fact finding committee was headed by Justice Srikanth Babaladi, Retd. District Judge and included Madan Gopal, Retd. IAS;  Dr. R Raju, Retd. IFS; Dr. Prakash, Retd. IRS; M N Krishnamurthy, Retd. DGP of Kerala and many journalists and social workers.

The Committee visited the houses of victims of riots, of people killed by police firing as well as visited the police stations where the rioters had gathered in large numbers with intent of killing P. Naveen. They found that houses and vehicles that belonged to prominent Hindus were damaged and destroyed while Muslim properties were not touched.

There are multiple reasons to conclude that these were pre-planned:-

These facts were also verified by the police orally to the members of the committee. However, it remains to be seen how much of it is included in the chargesheet.

Aim of the rioters : land jihad

The short term aim of the rioters was to kill P. Naveen. They looted and torched his house and attacked the police stations in search of him. They wanted to take law in their hands and “slit his throat”. This reminds one of Kamlesh Tiwari murder in which his throat was slit for apparent insulting Muhammad, the prophet of Muslims. According to the report, which as been accessed by Hindu Post, they were shouting Islamic slogans of “Allah o Akbar” etc. while attacking properties and police stations.

The secondary and long term aim is described as being that of land jihad. The authors of the report give example of Padarayanapura in Bengaluru itself, which used to be Hindu majority area just 20-30 years ago. Frequent riots were staged in 1990s and 2000s that forced Hindus out of the area. Daily eve teasing, cow slaughter on roads and harassment increased. Hindus had to sell their properties at throwaway prices to Muslims and now only about 5% of the population remains Hindu. They have now changed the name of different parts of the colony to Tippu Nagar, Mehboob Nagar etc. and nobody uses the name Padarayanapura now!

The riot affected areas are KG Halli, DJ Halli and Kavalbyrsandra. Of these, Kavalbyrsandra is the Hindu majority area. The targeting of houses of prominent Hindus of these areas was a tactic to repeat Padarayanapura in the area according to the authors of the report.

Local Muslims claimed that the riot was the work of the outsiders. However there are many indications of local involvement that have been unearthed by the authors of the report. According to the report:-

The report reveals some explosive details about the Bengaluru riots. It has revealed that in the larger context of riot, P. Naveen’s post was immaterial. P. Naveen has been claiming that his account was hacked, which is a distinct possibility. It is possible that local Muslims did not relish his posts that celebrated Ram Temple Shilanyas and decided to make him a scapegoat. Minorities in Pakistan and Bangladesh have often been victim of such acts, where Hindus are accused of blasphemy and then lynched . The same may have been planned in Bengaluru.

The authors also compare the role of Muslim women after the riots. Just like in London, in Malmo, Sweden and in Shaheen Bagh, women were used as shield to save the rioters. After the arrest of rioters, they gheroed the Police station and demanded that rioters be let off as they are innocent! In a recent incident, the wife an ISIS terrorist had said that his husband be let off as she has 4 small children. So using of women to induce tender emotions is an old tactic of Jihadis.

The tactics of Jihadis of PFI/SDPI are likely to be repeated in other areas of the country. Indeed, Delhi saw this in February. It is time that their alleged links with terrorist organisations also be investigated and such elements brought to book. The police now has the task of building confidence among the Hindus of the area. The Hindu society itself has to rise from slumber and realize the need to organise itself, so as to fight off the jihadi onslaught in all walks of life.