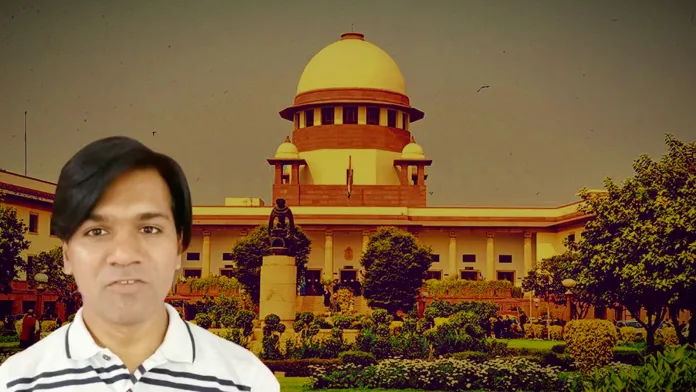 The Supreme Court (SC) on Wednesday granted interim bail to Mohammed Zubair, serial offender and co-founder of the controversial propaganda ‘fact-checking’ site AltNews, in the six FIRs registered against him by the Uttar Pradesh Police.

A bench headed by Justice D.Y. Chandrachud said: “There is no reason for deprivation of liberty of the petitioner…to be released on interim bail in each FIR (UP FIRs)…power of arrest should be used sparingly…”

The bench said SIT constituted by the Uttar Pradesh government, to investigate the UP FIRs, is rendered redundant and is disbanded. SC clubbed all FIRs against Zubair, and transferred all cases from Uttar Pradesh to Delhi Police. It added that Zubair can move the Delhi High Court for quashing of the FIRs.

Interestingly, the SC also said that Zubair has to be given bail in any future FIRS registered on ‘same subject matter’. It also stipulated that he has to be released by 6 PM on the same day! SC had previously directed UP police not to take any ‘precipitative steps’ against Zubair without their permission.

During the hearing, senior advocate Garima Prasad, representing the UP government, informed the Court how Zubair’s provocative tweets were used to instigate Muslims after Friday prayers. She said, “Subsequent to the TV debate on May 26, 2022, on June 5th and 6th, he has shown that the people from all over the world are supporting them why aren’t you coming forward to protest. These tweets were circulated as PAMPHLETS after Friday prayers…There were tweets of June 6 which said why are people not protesting. His tweets were circulated as pamphlets, and soon after, the people came out of prayers, and there was heavy violence.””

She mentioned that whenever Zubair tweeted something provocative, he received additional funding via donations. She said, “The accused is not a journalist. He calls himself a fact checker. Instead of fact-checking, he posts tweets which are getting viral and spread venom and propagating people. He has been paid for these tweets and he gets paid more for the malicious tweets.”

The counsel added that Zubair had got close to Rs 2 crore and he is not a journalist. Zubair’s counsel advocate Vrinda Grover called the cases an ‘orchestrated investigation for stifling dissent’.

During investigation, police found that Zubair received donations from other countries, including Pakistan and Syria, deemed a violation of the FCRA Act as AltNews does not have an FCRA license. Along with FCRA violation, he has also been charged with destruction of evidence (formatted phone and deleted tweets) and criminal conspiracy, apart from 153A (promoting enmity between religious groups) and 295 (injuring or defiling a place of worship, with intent to insult the religion of any class) of the IPC. AltNews and its parent company Pravda Media have denied violating the FCRA Act and claim that their site only accepts domestic payments through the Razorpay gateway. However, it has emerged that another AltNews donation page is also active which might be accepting international payments.

As multiple tweets show Zubair seeking crowd funding, the IFSO (Intelligence Fusion & Strategic Operations) unit of Delhi Police is also looking to retrieve electronic data to find out the source of the funding received by him. Investigators suspect the money could have been routed from across the border and had layering to keep the source hidden.

Sources also said that he recently deleted several tweets whose contents were allegedly offensive. Police are trying to recover the deleted tweets. He also refused to hand over his electronic gadgets to police and claimed that he had ‘lost’ a mobile phone.

For the uninformed, AltNews is a rabid anti-Hindu propaganda site which has often been found spreading fake and distorted news in the guise of fact-checking.

Md. Zubair is the key player in instigating Muslim mobs and manufacturing the entire Nupur Sharma controversy. He circulated an edited clip from a TV debate involving Nupur and others that was discussing the discovery of a Shivling at the Gynavapi site where Mughal emperor Aurangzeb had demolished the Kashi Vishwanath mandir to build a mosque.

Incensed with the way the discovery of the Shivling was being mocked by Islamists like fellow panelist Tasleem Rehmani (member of the radical Islamist SDPI/PFI outfit), Nupur presented a what-if scenario to ask how Muslims would feel if others mocked their religious beliefs and icons in the same way, and went on to quote something from the hadith.

Zubair took her statement out of context and unleashed an army of Islamist trolls and the entire Muslim ummah. Even a Pakistani preacher admitted that a Muslim panelist first provoked Nupur Sharma and in response to this the suspended BJP spokesperson commented about the Prophet of Islam. He said that the entire incident was just over a 5-second distorted clip. Even some progressive Muslims in Bharat admitted that what Nupur said was written in the hadith.

But Zubair’s incendiary tweets spread like wildfire, and led to violent protests all over Bharat, and ultimately led to the brutal murders of Kanhaiyalal Teli and Umesh Kolhe, and death threats to several other Hindus. And this is not the first time he has had a brush with the law.

In 2020, Md. Zubair had doxxed (publish private or identifying information) a minor Hindu girl in a tweet while targeting her grandfather. This was followed by rape threats being issued to the minor by Zubair’s Islamist followers. Two FIRs were filed against him in that case. Zubair continued to brazen it out and got interim protection from Chhattisgarh High Court which was hearing his plea to quash the FIR against him. NCPCR too had taken cognizance of the matter and asked Twitter to take down the offensive tweet. After Twitter refused, NCPCR approached Delhi High Court. That matter is presumably still dragging its way through our legal maze.

While granting bail to Zubair, the SC bench said, “No justification to keep him in continued custody and subject him to endless rounds of custody”. It also clubbed all the FIRs against Zubair, and transferred all cases from Uttar Pradesh to Delhi Police. Even the SIT created by UP government to investigate Zubair has been disbanded!

When the UP AAG reminded that the court had earlier directed that the petitioner (Mohammed Zubair) should not post tweets, Justice Chandrachud said it was like ‘telling a lawyer not to argue’.

“It is like telling a lawyer that you should not argue. How can we tell a journalist that he will not write?” asked Chandrachud. When the AAG asked that the court impose a condition that Zubair will not tamper with evidence, Chandrachud replied: “If there is any tweets against law, he will be answerable. How can be pass any anticipatory order that someone will not speak. The evidences are in public domain. We can’t say that he won’t tweet again.”

It is pertinent to note that Zubair has been charged with destruction of evidence – formatting his electronic device and deleting tweets.

Zubair was arrested on 27 June and will now walk free in under a month, despite facing multiple serious charges and instigating violence across the country that claimed at least two innocent lives. In this brief incarceration, he managed to get multiple hearings with the top court of the country and even had foreign countries like Germany rooting for him!

This case again shows how senior Lutyens’ lawyers like Vrinda Grover and Colin Gonsalves, who both represented Md. Zubair, exercise a vice-like grip over our judiciary. Western liberals also have far more influence over a section of judges and elites, than the aspirations and well-being of ordinary citizens.

Md. Zubair and his ilk are children of a greater god. They enjoy privilege that an ordinary Hindu cannot even dream of. A sadhvi and Army officer rotted in jail, suffering unspeakable torture for years on end, and our judiciary rejected their bail pleas and even requests to visit ailing family members.

The developers of the asinine and distasteful BulliBai/SulliDeals apps were arrested with alacrity by our authorities and kept in jail for close to 6 months, despite their juvenile online app not having resulted in any real world harm. FIRs were lodged against them in Delhi and Mumbai and the 6 Hindu kids were arrested in January this year.

After they were denied bail multiple times, a Delhi court granted bail in March. But they continued to languish in jail, until a Mumbai court finally granted bail in June. Their cases were heard in lower courts – no priority hearings in HC or SC for them. No directions to club all FIRs and transfer cases to one jurisdiction. Mainstream media went to town over that case, demonizing Hindus and online ‘trads’ in particular.

For Nupur Sharma, the Supreme Court refused to entertain her petition requesting all FIRs lodged against her in Maharashtra, Telangana, West Bengal, Karnataka, Uttar Pradesh, Assam and Jammu & Kashmir be clubbed with the FIR registered by the Delhi Police. The SC rebuked her for being ‘arrogant’ in coming to Supreme Court instead of approaching magistrates. In an unprecedented tongue-lashing, the SC bench blamed Nupur for ‘single-handedly setting the country on fire’.

It was only after over 100 retired judges, bureaucrats and Army officers spoke up against the comments of the two-judge SC bench comprising Justices Surya Kant and Justice J.B. Pardiwala, that the SC relented somewhat and has now granted interim protection from arrest to Nupur till August 10, and the same bench is now rehearing her original plea to club FIRs.