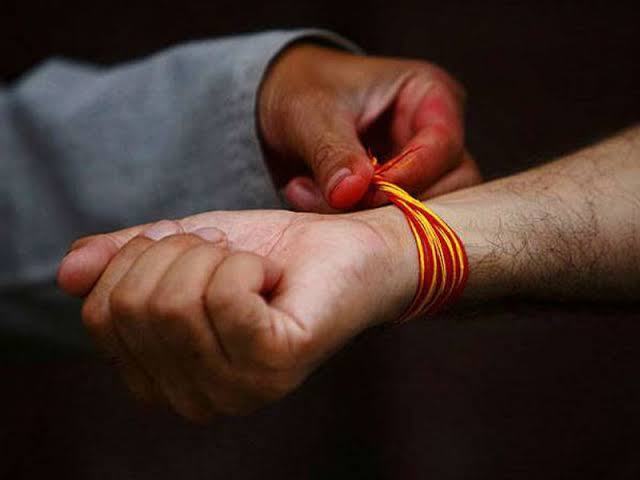 While many incidents of students being forced to not wear Hindu religious and cultural symbols like sacred ash, rudraksha, flowers, bangles, etc in Christian schools or Christian teachers have been reported, a new incident of a Periyarist teacher cutting the sacred thread and rubbing the sacred ash worn by Hindu students while giving a lesson on ‘atheism’ to government school teachers has come to fore.

Shanmugam, a maths teacher working in the government high school in Perumal Palayam in Thuraiyur, Trichy identifies himself as a follower of ‘Periyar’ EV. Ramasamy. Some girl students have also complained that the teacher molested them while removing the Hindu religious symbols.

He is said to wear black to the school to show his ideological leaning and atheistic nature. Students have accused him of asking them to not wear bangles, flowers, sacred thread, sacred ash and Kumkum. He wiped the symbols from their foreheads and is said to have cut the threads on their wrists too. Students have told that he used obscene language while scolding them and degraded their religious beliefs. He is also said to have given them a ‘lesson on atheism’.

Some female students have come forth to say that he indulged in touching them inappropriately in the pretext of guiding them. They have alleged that he waits at the gate with scissors in hand to cut sacred threads and flowers as they enter the school. Parents of the victim children have filed complaints with the police. Apart from this complaints have been filed with the education department as well.

It is reported that the education department investigated both the victims and the teacher and he was found guilty. The investigative report has been forwarded to the higher officials for necessary action. Parents have expressed their anger at their children being treated thus and demanded that the teacher be arrested under POCSO.

That Periyarists have such strong Hindumisia (dislike/hatred for Hindu Dharma) is not surprising given the kind of vile falsehoods spread by the founder of the Dravidian ideology, EV Ramasamy (aka ‘Periyar’), for Hindu Gods like Bhagwan Ram. And for reasons best known to it, the secular Indian state usually turns a blind eye to anti-Hindu hate speech & actions, while clamping down hard on criticism of other religions.