Can Our Children be Demonised for Celebrating Their Festivals as per Their Traditions?

The Friday morning, two days after Diwali, would have seen Servite Matriculation school children discussing and comparing what they wore, ate, what types of cracker types they burst and lights lit on Diwali like every other schools’ students. Little would they have known that they would be punished for the things they did on that joyous, colourful day.

In the morning assembly, the kids were asked whether they had burst crackers for Diwali and those who didn’t were asked to raise their hands. 7 kids whose hands went up were felicitated with a certificate of appreciation for not bursting crackers. The remaining students (it must be noted that the school’s strength is around 1200) were made to do sit-ups, write imposition and demonised.

+Servite? Servite Order is an Intl. Order of Servants of Mary. Started in 1233 CE. They have many branches in India (s-shot). Also, many + pic.twitter.com/HUVby2Y72j

When the children told this to their parents, they condemned and questioned the school management. Every media report on this issue says that the school management acted only as per the circular sent to them by the education department and Tamil Nadu Pollution Control Board (TNPCB).

Police complaint has been filed on the school management based on which the police inquired the principal and teachers. They repeated that they only acted upon the circular from TNPCB in letter and spirit. The State Commission for Protection of Child Rights has also received a complaint and has launched an investigation. One of its members had talked to both the principal and the affected children.

The principal has alleged that false complaints have been filed to besmirch the image of the institution with political backing since BJP functionaries have alerted the educational department of this issue. District Chief Education Officer has asked the Inspector of Matriculation Schools to probe into this. The principal has stated to Times of India that they had conducted awareness activities about pollution caused by crackers during Christmas and Ramadan as well.

TOI reports a senior official of education department covering up the bigotry of making children apologize for bursting crackers as ‘unintentional’. From Tamil media reports we get to know that the kids were called ‘Irulin Pillaigal’ (Children of Darkness) which coincidentally is exactly how evangelists describe heathens. Except DNA, no English language media has come out of its secular shell to call it out for what it is – most outlets have reported that the children were forced to apologise to nature, while in truth they were told that they have sinned and so must ‘seek pardon from God’ with folded hands and bowed head.

The bigotry and hatred didn’t stop there. The physical education teacher, Andru Boss, caned the girls who had applied Marudhani (Henna or Mehendi) on the occasion of Diwali. This is not the first time we hear of children being punished in Christian schools for applying Mehendi. So the school management’s claim that he punished the children for not wearing leggings to PT class as they were instructed to, falls flat even as the principal can be seen contradicting herself in a video doing rounds on social media.

The principal says they only wanted to create awareness about the pollution caused by bursting crackers and that they only followed TNPCB’s instructions. She also says that they don’t care about Mehendi  during Diwali, which makes one wonder if she feels that it’s okay to punish for the same on ordinary days? When parents ask ‘Did other schools receive the same circular,  why don’t we see any other school punish their students?’, she has no answers.

There are justifications being made in social media that the teachers only asked the children to not use Mehendi  with chemicals. But that is not the case. This has been happening for so long that we simply took it lying down till now. It still happens in Christian schools but children mostly follow the rules to avoid getting punished.

I’m confident in saying that by doing this they lose the joy of hunting for Mehendi  trees, applying it on the eve of Diwali, comparing it with friends the next day on whose Mehendi  has reddened the most. It can be gathered from the Principal’s response that even if TNPCB sent out circulars asking to create awareness, she took matters into her hands to decide that not following it demanded punishment, public shaming and degrading one’s beliefs.

Here are the copies of Community Service  Register given by the local police station. First complaint is against the Principal and Physical Education teacher for causing mental agony to a girl child for applying Mehendi  by caning her. The child was so traumatized she actually wet her uniform. Second one is against the principal for punishing the complainant’s son and other Hindu students for bursting crackers on Diwali. The News Minute quotes the boy’s father as saying “They are trying to slowly brainwash the children and turn them against their own religion. Next year, my son won’t want to burst crackers because of this incident”. However,  Servite Matriculation was not the only minority school to preach against celebrating Diwali traditionally with fire crackers.

The headmaster of St.Theresa’s Primary School near Nambiyur, Erode went one step further in distributing pamphlets that advised Hindus to celebrate a ‘fireless’ diwali. The pamphlet says ‘Let us avoid crackers & fireworks that burns money, spoils health thereby causing illness and produces toxic smoke which pollutes the environment and air that results in reduced rains. Let us celebrate a fireless Diwali’. It also has the HM’s mobile phone number. 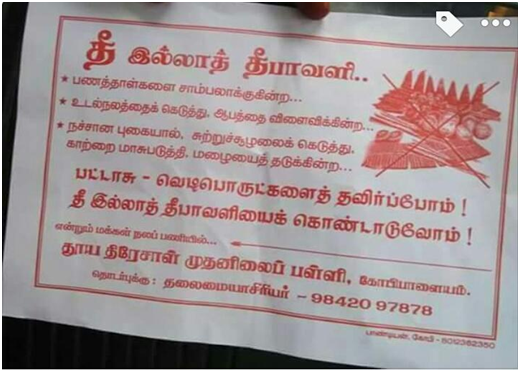 While social media users were hoping that he got a earful, it is fortunate that Hindu Munnani found out about this and protested in front of the said school. They got the HM to issue an apology and celebrated the victory by bursting 100/1000 wala ladi in front of the school. St.Theresa’s Primary School appears to be a Government aided School. The taxes paid by Hindus are funding a minority institution to preach against our beliefs and traditions. It is not only from  State  Government, but these schools get grants from Central Government too for building and expanding the infrastructure of their institutions. Here are the key features of the scheme for Infrastructure Development in Minority Institutes (IDMI) run by Union Ministry of Human Resource Development – 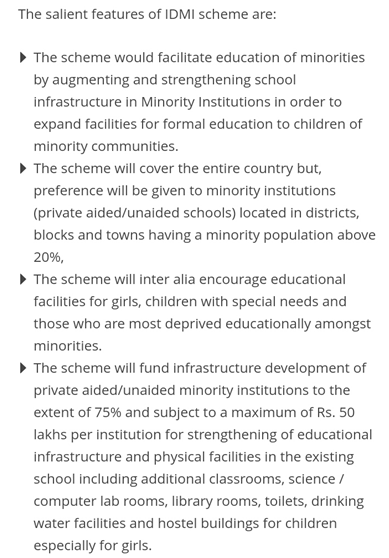 Schools that probably run on money paid by non-Christians by way of taxes and obtained minority certificate that was given to preserve Christianity, now admit large number of non-Christian children and impose Christian beliefs on them. Is this right? No. Do we have any say in how they should act henceforth? No. Unfortunately minority institutions have full autonomy to do what they want. It is the cat with the minority tag that has to be belled.