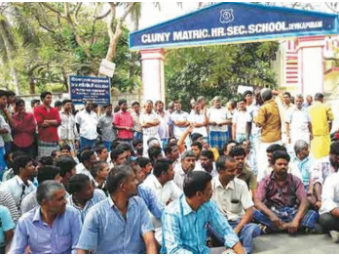 Another day, another minority school, another attempt at making Hindu children feel ashamed about their traditions and customs was at display when Cluny Matriculation school near Aarani in TN punished two girls for wearing Vibhuti, Chandan and flowers.

Cluny Matriculation school, Devikapuram, near Arani, Tamil Nadu. Girl students were told not to keep Chandan (Sandalwood paste) on forehead. Parents-relatives along with Hindu Munnani protest against the action.https://t.co/UGDDr4QrAm

Tamil month of Panguni is the time Tamil Hindus celebrate divine marriages (Thirukalyanam), car festivals and yearly celebrations. Every temple has a ritual going on at least ⅓ of the days of this month. It’s natural for children to take part in them and wear the symbols.

As per a girls’ mother, her daughter was scolded for wearing Vibhuti (sacred ash) and Chandan and warned to not repeat despite which she wore them that day. A teacher wiped her forehead, grabbed her hair forcefully to remove the flowers which made the plaits come undone. The girl was humiliated and had to plait her hair in front of hundreds of students after which she had to take an exam.

The girls were advised to follow the school’s religious principles. They were also caned and made to kneel for 2 hours to make an example and discourage other kids from making the same ‘mistake’. Upon hearing about this atrocity, parents went to the school and questioned the school management. They were told that their kids were punished because they failed to follow the rules and regulations of the institution.

A verbal spat ensued between the parents and the school which resulted in the kids not being allowed to attend classes. In the end, the management asked parents to get transfer certificates for their kids and leave the school if they want. Opposing this decision public and Hindu Munnani protested in front of the school and blocked the road. Government officials and police tried to mediate between the two parties, result of which is unclear.

The school denied the accusation of harming the girls. The correspondent and principal promised that such incidents won’t repeat.

While English media failed to pay attention to this news, Telugu media has gone to the trouble of covering it along side few Tamil media outlets. On one hand, the Church spreads propaganda through its crypto sepoys that Tamils followed/follow a different religion than Hindu Sanatana Dharma and claims things associated with Hindu Dharma as Tamil traditions, on the other hand it instills shame about the same traditions in children who go to its institutions.