Yoga is ‘pre-Hindu’, Does Not Lead to God: Kerala Catholic Church 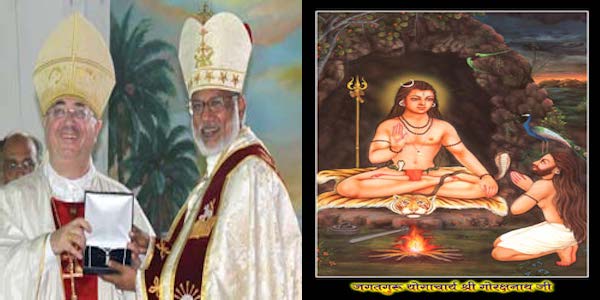 In a statement calculated to discredit the very core of Hindu Dharma, the Syro-Malabar Catholic Church of Kerala has said that practising Yoga does not lead to God and that Yoga has ‘pre-Hindu, secular origins’.

These comments have appeared in a Syro-Malabar Doctrinal Commission report posted in the latest bulletin of the Mananthavady diocese of the Church. Accusing the Sangh Parivar of ‘exploiting Yoga for political and communal goals’, the report asked Christians to avoid Yoga and and other anti-Christian practises which are totally against the Catholic faith.

“Yoga is not a way to reach the God. It is not right to believe that it will be helpful to experience God or to have a personal encounter with the almighty. Yoga doesn’t bring about any improvement in any person,” said the report. The report goes on to add that Yoga could actually prevent one’s soul being lifted up to God and that its physical gestures and exercises could become idolatrous – these dangers have been outlined in recent Pontifical (from the Catholic Pope, Vatican) council directives as well, the report says.

Calling Yoga as merely a physical & mental exercise, the most bizarre assertion in the report tries to delink Yoga from Hindu Dharma altogether –

It said studies tended to show yoga as prevailing in the pre-Buddhist, Jain and Hindu periods. Though yoga may have originated and grown out of secular traditions in India it later spread under the influence of the Hindu religion under Brahminical dominance. Yoga thus acquired the hues of Hindu religion, the report said.

After attacking the very core of Hindu Dharma, the Church report then offers a fig leaf of reconciliation by saying “At the same time, the Catholic Church did not approach yoga with the view that all eastern modes of worship were improper or bad. If training regimes that aid the working of the Kingdom of God can be discovered in Indian culture it would be a great asset.”

One can understand the organized Church feeling threatened by growing popularity of Yoga, that it has to issue such fatwas to its laity – especially at a time when its own credibility is under a cloud in light of never-ending sex abuse cases and allegations of land scams. But having failed to fully digest & appropriate Yoga, the Church is now trying to discredit and delegitimize Yoga. Is this the spirit of tolerance & unity in diversity that constitutes the Idea of India our elite intellectuals keep talking about?

While Hindus are taught from childhood about ‘Sarv Dharm Sambhav’ popularly interpreted as ‘All religions are one…as they might have different paths, but the end goal is one’, is the same respect given to Hindus by globally powerful faiths like Christianity & Islam which happen to be minorities in Bharat?

The fact is – Yoga is integral to Hindu Dharma. Yoga is one of the  Ṣaḍ Darṣanas (Six Orthodox Philosophies) of Hindu Dharma. Even the physical Yoga forms i.e. Aṣṭāṅga Yoga & Haṭha Yoga have the same end goal – Union or attainment of one’s true Self and moksha (liberation of the Atma). Bhagwan Śiva Himself in the beginning few verses of the Śiva Saṃhitā declares the knowledge of Yoga is to attain Spiritual Knowledge that will in turn liberate the Atma.

There are also some modern Hindu Gurus and organizations who say that Yoga is ‘secular’ in an attempt to make it more acceptable to non-Hindus. That is also wrong. This article by twitter user @pinakasena says it best –

Hindus do not deny anyone the right to use Yoga, it is the stripping off of its Hinduness which causes outrage. Hindus have been the custodians of Yoga for millenniums, we believe that it was given to us by our Gods to enhance our spirituality. We are happy to share the wisdom, but it is our wisdom in the end.

Common citizens of all faiths should come forward to criticize the Syro-Malabar Catholic Church for this direct assault on the spirt of mutual respect that alone can ensure a harmonious nation. The doctrine of Abrahamic exclusivism and supremacism must end.