Is Catholic Church Cardinal Beyond Law of Land: Kerala HC 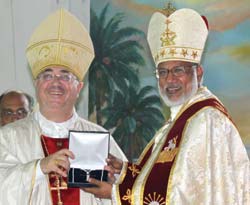 The Kerala High Court on Monday harshly criticised Cardinal Mar George Alencherry, Major Archbishop of the Syro-Malabar Catholic Church’s Ernakulam-Angamaly Archdiocese, in a case pertaining to a land scam. The court asked whether the Cardinal was beyond the law of the land. Daily Pioneer  reports –

“The court’s criticism came in response to a submission made by the counsel of the Cardinal that only the Pope had the authority to take action against him if he had done any wrong in the Church land deal as per the ‘Canon Law’, a set of ordinances and regulations made by ecclesiastical (relating to the Christian Church or its clergy) authority.

The Cardinal’s counsel made the claim in the High Court during the arguments in a petition filed by a resident of Cherthala, Alappuzha against the Cardinal over the controversial land sale which had brought immense monitory loss to the Archdiocese. According to the petitioner, the Canon Law has no legal validity in Bharat.

Claiming that affairs of the Church were governed by the Canon Law, the Cardinal’s counsel submitted that the Pope alone could take action against him if there were irregularities in the land deal. Several people had petitioned the Pope over the issue but no action had so far been taken against him by the Vatican and this proved that he had done nothing wrong, he claimed.

The criticisms against Cardinal Mar Alencherry came from the single-judge bench of Justice Kemal Pasha in response to this argument. The judge asked whether the law of the land was not applicable to the Cardinal. The judge also asked why no case had been initiated against the Major Archbishop.

Justice Pasha pointed out that the Archbishop was merely the custodian of the Church’s property and he could not be equated to the Archdiocese. He also expressed the suspicion whether the Cardinal had the authority to sell Church land for a price less than the one agreed upon by the concerned Church bodies.

The court also observed that the Pope had no jurisdiction in Bharat and that the laws and rules of The Vatican could be applicable only to the internal affairs of the Church. It said that the police should initiate a case if they got a complaint over the land deal in the Archdiocese of the Church.

The petitioner had earlier approached the police with a complaint relating to the Church land scam but police had not taken a follow-up action on that. The court will hear the detailed arguments over the petition next Monday.

The controversy pertains to the sale of over three acres of prime land belonging to the Archdiocese in Kochi city worth tens of crores of rupees to private persons. The lands were sold in two schedules to 36 persons in September, 2016 and between January and August last year and Cardinal Alencherry himself had signed in all the sale documents.

The Archdiocese had suffered huge financial losses through the land sale for which a middleman, whose credibility has now come under suspicion, had been engaged. Cardinal Mar Alencherry has also been accused of taking the initiative to bring in the middleman, Saju Varghese Kunnel.

The Church had decided to sell the prime land for Rs 27 crore – it could have fetched a much bigger price – but it was sold for Rs 13 crore as per the sale documents. However, the amount that had reached the Church’s account was only Rs 9.30 crore. The lands were sold in order to repay a bank loan availed for buying land for a now-aborted medical college project.”

Catholic Church of India has often deferred on key decisions in sensitive matters to the Vatican, a sovereign State located within the city of Rome, overlooking the requirements of Bharatiya law.

For eg., in Aug 2016, Catholic priest Arockiaraj (36) was arrested for sexually abusing and murdering Fathima Sophia (17) in Kerala’s Palakkad district in 2013. It was revealed that Arockiaraj had confessed to “using” the victim in a secret ‘canonical court’ held 4 weeks after the murder. Yet, the Church did not report this sexual abuse of a minor to the police. They carried out correspondence with Rome and merely suspended the accused priest as per “canonical law”. It was only a brave fight for justice by the victim’s mother, despite brazen Church pressure including denial of burial rituals to the deceased girl, that saw the entire sordid episode come to light.

Incidentally, Cardinal Mar George Alencherry, was in the thick of controversy back in 2012 as well, when he defended the Italian security guards who shot dead two Kerala fishermen off the Kerala coast. Alencherry made the shocking remarks while giving an interview in Rome to Agenzia Fides, the Vatican’s official news agency.

India Today (IT) reported at the time –

“Faced with public outcry over Alencherry’s statement, the Catholic Bishops’ Conference of India (CBCI) and the Syro-Malabar Church hurriedly issued statements saying the cardinal was misquoted. “The cardinal did not utter many of those words. All he said was that the issue be resolved without upsetting the mutual relations of India and Italy. How can he say this when the poor fishermen who were killed were also Catholics?” explained Fr Paul Thelakat, spokesperson of the Syro-Malabar Church.”

Question to Paul Thelakat -would Alencherry’s defense of the Catholic Italian guards have been acceptable if the fishermen killed were Muslim or Hindu or even Protestant Christians?

“The Syro-Malabar Church, one of the 22 autonomous oriental churches in global Catholic communion, surpasses Kerala’s all other religious organisations in economic might as well as political clout. Traditionally, the Syro-Malabar Church’s writ has gone unchallenged in the Congress. The church has not only a direct role in policy formulations but it even hands out its list of preferred candidates during every election.

The anti-communist political formations in the state receive its most formidable ballast from the Syro-Malabar Church and the Latin Catholic Church. This church led the “liberation struggle”. It saw the dismissal of Bharat’s first elected communist government which came to power in Kerala in 1957. Ever since, the Syro-Malabar Church has always played a direct role in politics and has issued pastoral letters calling for defeating the communists in every election. The power of the church became evident even in the latest controversy. Even when most sections in Kerala condemned the cardinal’s comments, the silence of Congress CM Oomen Chandy and UDF leaders was eloquent.”

During the colonial era, Western missionary churches, schools and hospitals were considered foreign enclaves, where foreign priests under the protection of foreign colonial military powers acquired political power. For the Church in India, nothing much seems to have changed from that era – the priests are now Indian, but they still feel more accountable to the Vatican than to the Indian State.

Ironically, the Congress party which is micro-managed by the Church in Kerala and North Eastern States like Meghalaya, Nagaland etc., is considered as the flag-bearer of secularism by our intellectual elites.

Given this scenario, it is indeed commendable that Justice Kemal Pasha said what needed to be said – “the Pope has no jurisdiction in Bharat”. In fact, each and every judge serving in this country should be asked to internalize this basic fact.