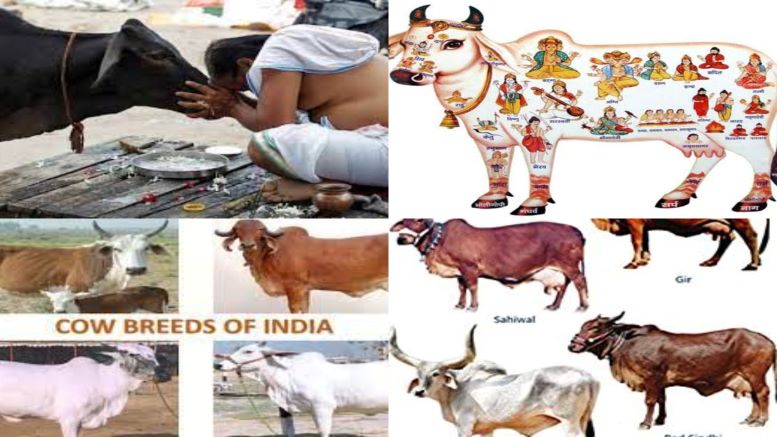 Cows have been a part of Bharatiya families for several centuries now. It’s been a tradition to raise cows and bulls as family members. Cattle have always been treated with respect and cow has been accorded the status of a mother in our Shastras. In modern times it is fashionable to keep dogs, cats, fishes, tortoises, etc as pets but those keeping cows or working for their protection are ‘looked down’ upon.

Every living being has sentiments and feelings. Research has shown that cows are no exception. Each cow has its own nature and characteristics much like any other pet. In fact, they are similar to humans in several aspects. Just like we can feel the loss of a loved one so can these gentle bovines.

According to animal behaviorists, cows show socially complex behaviors and interact in complex ways. Just like humans they also develop friendships over time and may at times even hold grudges. It has been seen that they suffer from anxiety and pangs of separation and are known to mourn deaths just like humans. Often we can see a mother cow calling out frantically to her separated calf.

It has been proved beyond doubt that cows are intellectual beings that not only understand cause and effect relationships but are also known to have cognitive abilities. They display intellectual abilities like humans and are known to become elated on solving problems. They respond to music and tend to display a wide range of emotions. Stress affects them as well and living under stressful conditions can cause them to display stressful emotions.

Those who rear cows get attached to them much as they do to a family member. The bond between the owners and cows is similar to that with other pets. Cows can also recognize death and hence they know when they are being sent to slaughterhouses and try to resist as much as possible. Cows have been known to make escape attempts and resist being lured back into slaughterhouses. More often than not they would defend their young from any harm to the best of their abilities.

The reason why our ancestors revered the cow as Kamdhenu was not only for the products they gave us but also because they shared a special bond with those rearing them. Those who rear cows bring up them like their own children and hence share a deep bond with the bovines. The love is reciprocal and cows too display a similar love for their owners.

Sending them to abattoirs after they became a spent force was unknown in earlier times. Even today there are many villagers who would never send their cows to slaughterhouses once they age. Such is the veneration for cattle.

Kamdhenu is the divine wish-fulfilling cow known as Surabhi cows. They are the ancestors of cows of Bharatvarsh. They are considered holy and are worshipped not just in Bharat but also in Nepal and Burma. Devis and Devatas are said to reside within a cow and hence slaughtering them are beyond the imagination of a Hindu.

Apart from religious reasons, there are economic and emotional reasons as well. In earlier times people were mainly pastoral and this made cattle central to their lives. Bulls were used in the fields while cows gave several products for household use. Even today Bharat is largely agricultural, hence bovines continue to hold great significance for an average Bharatiya.

A number of products are obtained from the cow besides milk and milk products such as cow dung which is used as manure and cow urine which has medicinal properties. Cow dung is also used as fuel and disinfectant in rural areas.

Of all the crimes Gauhatya or killing of a cow was the most heinous and unpardonable one too. Shri Krishna spent his childhood days as a cowherd in the village of Nandgaon. He states in the Bhagavat Gita ‘among cows I’m Kamadhenu’ (Chapter 10, verse 28). Cows are said to be representative of Dharma and everything Satvic. The Vedas extolled the bonding a mother cow shared with her calf.

Such was, is, and will continue to be the significance of a cow to a Hindu. Even if one does not rear a cow one surely has affection and reverence for them. These gentle bovines are, therefore, never seen as food. However, we are seeing a new trend, in the name of modernism, where Gau Rakshaks are seen as ‘communal’. Isn’t it hypocritical to consider some animals as pets and others as food and/or fashion products?