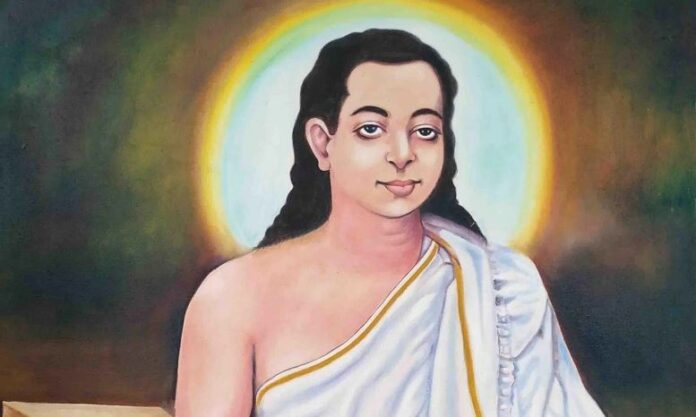 Srimanta Sankardeva (1449-1568 CE) was instrumental in bringing about socio-cultural and the Hindu religious renaissance in medieval Assam. His teachings are based on the fundamental principles of the Vedanta school. He propounded a simple and practical path to salvation for the masses.

Sankaradeva was born into the Shiromani (chief) Baro-Bhuyans family at Bardowa in 1449 to Shri Kusumvara and Satyasandhya Devi. He was raised by his grandmother Khersuti when he lost his father and mother within a span of three days when he was just seven years.

The Carit Kara states that Sankardeva could swim across the Brahmaputra in spate. According to Carit Puthi, he was such an expert wrestler that he won over a bull in a bullfight. He also practised yoga. He studied grammar and scriptures at Mahendra Kandali’s Tol. He once expressed his desire to construct a Deva Mandira at Bardowa to his companion Ram Guru.

Srimanta Sankardeva got an institutional structure built at Tembuwani in 1468 CE. A murti of Bhagwan Vishnu was unearthed at the construction site. A prayer house called Kirtanghar surrounded by huts was also constructed for the devotees. He along with Shri Madhabdeva is credited with establishing the Satra institution to fulfil the socio-cultural needs of the people.

At the age of 21, Sankardeva married Suryavati who gave birth to a daughter Manu after three years of their marriage. About nine months after Manu’s birth, Suryavati died. His second wife was Kalindi.

The following are some of the salient features of Srimanta Sankardeva:

(i) Brahma is the supreme truth. It is shapeless and beyond all attributes.
(ii) Brahma and Ishwara (God) are the same, even though Ishwara is the abode of all attributes.
(iii) Brahma and Ishwara are there in every being.
(iv) Ishwara and His creations are not different.
(v) Jiva (creature) is a component of God.
(vi) The creation is temporary, but not unreal.
(vii) Maya (illusion) is an attribute of God and its influence can be avoided by the grace of God.

Sankardeva preached the form of monism that owed loyalty to a single deity. He strictly adhered to devotion to Bhagwan Krishna. There was no place for any deity other than Bhagwan Krishna in Srimanta Sankardeva’s Eka Sarana Nama Dharma.

“Tumi Paramatma jagatara Isha, eka Eko bastu nahike tomato bytireka“, (Meaning: you are the universal self as well as the one supreme God of the creation. There is nothing other than you) reads a verse from his magnum opus Kirtana ghosha. He considered Ishwara as non-different from Brahma. For him, Ishwara was above the Maya. He categorically said that Bhagavanta or Ishwara was the supreme entity as described in Vedanta.

Sankardeva brought the paths of knowledge and devotion (Jnana Marg and Bhakti Marg) together. He wrote many treatises on devotion besides composing many devotional hymns and thus tried his best to enlighten his disciples about the true path to be followed in life. He differed from Adi Shankaracharya and Ramanuja in his attitudes towards creation. While Adi Shankara declared the Jagat or creation as Mithya or false, Sankardeva treated the Jagat as the playing field of God.

Mahapurush Sankardeva was a great and unparalleled literary figure of the 15th – 16th Century. He also brought a cultural resurgence in medieval Assam and accelerated the pace of development of fine arts like music and painting.