RTI reveals the step-motherly treatment to excavations at Dwarka 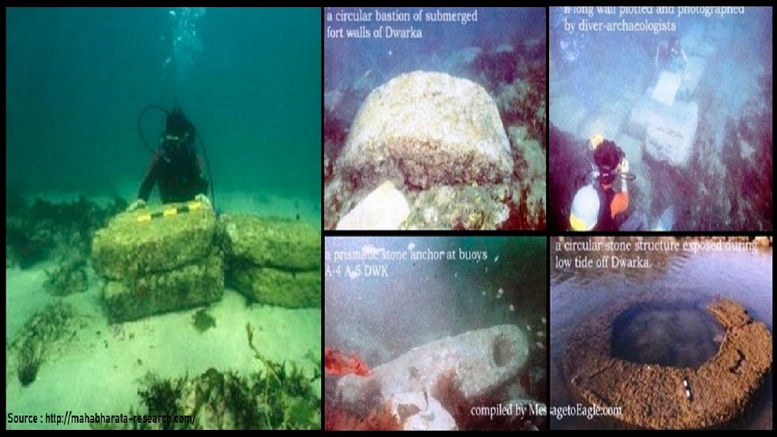 While the Keezhadi excavations continue to be in news and due to pressure by Christian organisationa, huge amount of money and resources are funneled there, excavations at Dwarka are getting a step motherly treatment by the govt. This also points to a lack of organisation and persistence in Hindus regarding their civilisational heritage.

Why excavations at Dwarka are important?

Dwarka, situated in western State of Gujarat is one of the four principle ‘dhams‘ or religious places in Bharat. The other three are at Badrinath in the north, Rameshwaram in the south and Puri in the east; together with Dwarka, they also indicate the religious and cultural unity of the country.

According to Itihasa as given in Mahabharata, Dwarka was settled by Shri Krishna and his Yadavas. Soon after the Mahabharata war, there was civil war amongst Yadavas of Dwarka and the city was ultimately reclaimed by the sea. According to scholars of Mahabharata, this event is dated to approximately 3100 BCE.

This was treated as a fable until 1930s when the search for the submerged city started. In 1963, first archaeological excavations started to give a picture of an underwater city near modern Dwarka. These excavations found various artifacts and a city dated to the Sindhu-Saraswati civilisation period. There were signs of a port that indicated its importance in trade with littoral areas of Arabian sea.

It must also be noted that Yadava kingdoms ruled in the nearby areas until medieval periods and many people tracing their descent to Shri Krishna live around these places. In a visit to the holy site this year in early March, the author saw thousands of people, who trace their descent to Lord Krishna, walking hundreds of kilometres to reach his temple in Dwarka from all over Gujarat!

So, Dwarka is a place where Itihasa meets history and the same is confirmed by various evidence. The archaeological investigations at the site can certainly throw some light on the civilisational history of Hindus as told in Mahabharata.

The excavations and work of Sh. S R Rao

S R Rao was a leading Bharatiya archaeologist, who led the excavations that discovered the Indus-Saraswati port city of Lothal and the ancient city of Dwarka. In 1992, he deciphered the Indus script as a Sanskritic language, but due to leftist bias in the academia, his decipherment which has been praised by scholars was not accepted by academia. It must be noted that leftists claim that Indus script was a Dravidian language and still peddle the lies of Aryan invasion. We recently saw in Keezhadi that they are trying to link Indus script with Tamil.

Rao asserted that the unearthed remains at Dwarka were the historical city that was home to Krishna, however the establishment leftist academia opposed him as they oppose every Hindu claim. One must remember the lies of leftists in Ram Temple case, where K K Muhammad declared that there was a temple below Babri, but leftist Suraj Bhan and Supriya Verma declared, and continue to assert, that there was no such temple. They were exposed in court where it was revealed that they had not even visited the site and read the ASI reports!

SR Rao proposed a budget of Rs. 14 crores for an excavation in Dwarka. This is a small amount as govt expenditures go, and its results could have thousand times the benefit for setting the right narrative. Unfortunately, an RTI reveals how seriously the Hindutvavadis at the helm of govt take these matters.

1. The current status of archaeological excavations at Dwarka.

2. Government agencies and institutions involved in archaeological excavations at Dwarka.

3. Place where antiquities are kept excavated from Dwarka excavation site.

4. Status of proposal submitted by Archaeologist, SR Rao for the excavation of Dwarka.

5. Amount of funds allocated for the excavation of Dwarka archaeological site so far.

The reply to the RTI, which ASI transferred to CSIR -National Institute of Oceanography can be seen below:- What does the RTI reply reveal ?

The reply reveals that there has been no exploration of the site in the last 13-14 years! Also, the total money spent on the underwater exploration has been a paltry Rs. 22 lakh! The reply doesn’t clarify what was spent on ASI’s land and underwater excavations, which appear to be separate from that done by CSIR-NIO. The reply shockingly says that NIO is not aware of any proposal by Dr. Rao. It must be noted that it was under Dr. Rao’s initiative that the NIO had opened a marine archaeology research centre in 1981.

This is a shocking state of neglect for Hindu sites by the government. Neither the state, nor the central govt is apparently granting funds of a Hindu cause. Compare this with Keezhadi where every year the state govt spends huge amount of money to explore the site. It granted 25 lakhs in 2015, 30 lakhs in 2016, 55 lakhs in 2018 and Rs. 12.21 crores in the current financial year!

The neglect of Hindu historical sites by the govt shows that its priorities are misplaced. We are always complaining about the wrong and uncharitable leftist narrative of our history, but we must realize that narrative has a scholarly and archaeological base, howsoever rudimentary.

The govt must understand that it takes years of patient work and financial resources to counter an established narrative. Excavations at Dwarka and its archaeology can shed some very important light on the history of our civilization. It can give scholarly authority to our epics. Ignoring it points to a surprising lack of judgement on the part of our leaders.