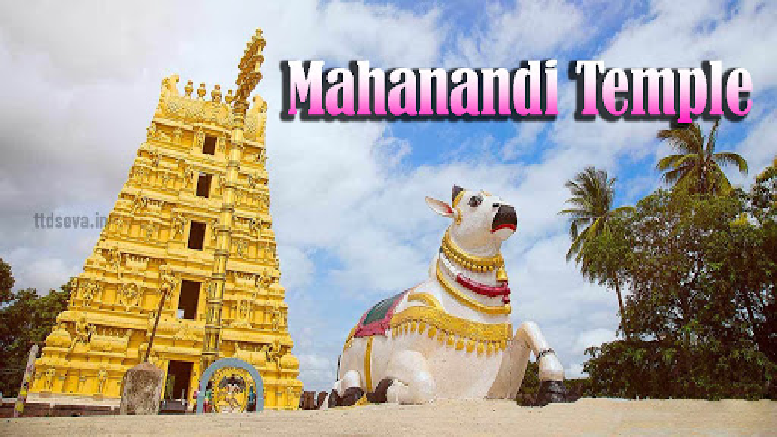 Mahanandi is a village located east of the Nallamala Hills 21 Kms from Nandyal, Kurnool District, Andhra Pradesh, Bharat. It is surrounded by forests. Within 15 km of Mahanandi, there are nine Nandi shrines known as Nava Nandulu.

Mahanandi is one of the Nava Nandis. The Mahanandiswara Swamy Temple, an important shrine, is located here. This ancient temple dates back over 1,500 years. The inscriptions of 10th century tablets speak of the temple being repaired and rebuilt several times.

The main temple is surrounded by three pools: two small pools at the entrance and one big pool inside the temple itself. This holy tank is 60 square feet with an outdoor pavilion called a mandapa in the centre. The inlets and outlets of the tank are arranged in such a way so that the depth of the water is constantly kept at five feet, thus enabling pilgrims to bathe in the holy waters in all seasons.

Uniqueness of this water source is that it has a constant flow irrespective of the change of seasons. The water source originates at the Garbhagruha (inner shrine) just below Swayambhu Linga.

The water is famous for its crystalline and healing qualities and is slightly warm. The outgoing water irrigates around 2,000 acres of fertile land surrounding the village. The surrounding areas are under production with rice fields, fruit, vegetable and flower gardens. The water during the winter season will be very hot and cold during the summer. During the early mornings, the water is lukewarm and water gets cooled gradually with the rise in temperature.

According to Agni Puranam, in the Krithayuga the Demon King Hiranyakasyapa did penance at this place and worshipped Bhagwan Mallikarjuna Swamy. The deity of Lord Shiva present in this sacred temple belongs to 7th century. Lord Shiva is worshipped here as Mahanandeeswara Swamy.

The basic temple structure was constructed by Chalukyas (7th century) and was later enhanced by Nanda Dynasty (10th century) and Vijayanagara Kings (15th century). One of the world’s biggest man-made Nandi of 15 ft. x 27 ft. is present near the Mahanandi temple.

The main Gopuram of this temple resembles Badami Chalukya style architecture where as other temple structures resemble the Vijayanagara style. Bhagwan Shiva’s consort Devi Parvati is worshipped here as Sri Kaameshwari Devi whose temple is located on the southern corner and a new Kodanda Ramalayam was also constructed in the year 1953.

The temple is declared as an ancient protected monument and notified as monument and archaeological site under the Ancient Monuments and Archeological Sites and Remains Act. The Vimana Gopuram over the sanctum sanctorum is of Chola style, constructed with sand stone having much architecture and engraved with flowers and creepers.

Surrounded by the Nallamala forests and hills, the pristine beauty of this temple enhances the pilgrims’ spiritual experience with its serene atmosphere.

Mahanandi is 21 Kms from Nandyal town. Nearest airport is Hyderabad (220 Kms)  and the nearest railway station is Nandyal.