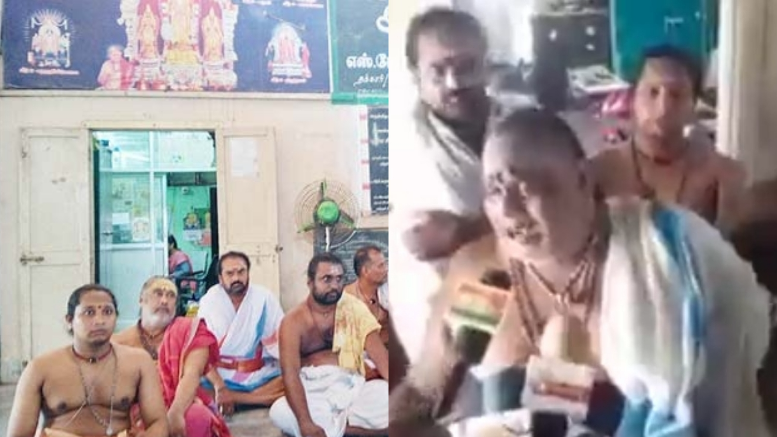 In Tamil Nadu, leftist NGOs are forcing HRCE officials to make non-hereditary pujaris perform priestly duties and break the age-old sampradayas. This sacrilege has traumatized the hereditary pujaris to cry and seek help from the public.

A few days ago, the hereditary pujaris of Vayalur Murugan temple in Trichy were forced by HRCE officials to leave their spot to allow newly appointed pujaris. The DMK government in the past had introduced a scheme to train non-brahmins as pujaris and has been appointing them in temples across the state since it came back to power a year ago.

The non-Brahmins trained under this scheme learn priestly duties for a year and thus are not aware of different sampradayas and customs of the thousands of temples in TN. No two temples, built and consecrated in line with Agama Sastras, follow the same customs and traditions. They differ for every temple and are passed down through generations to keep them alive.

But for DMK and other anti-Hindu forces, appointing non-Brahmin pujaris is merely a part of their scheming in breaking the structure of Hindu Dharma. So, the DMK government appointed two new pujaris qualified under the ‘crash course’ for priestly duties in the Vayalur Murugan temple. For this, two other hereditary pujaris serving in the temple for more than 10 years without a salary were fired by HRCE.

However, the hereditary pujaris made permanent employees by HRCE stood against this decision and staged a protest. They also opposed the new people performing pujas and other customs to the presiding deity and entering the Garba Griha. They returned to their duties only after HRCE officials assured them that the fired hereditary pujaris could continue and that the crash course pujaris won’t be asked to enter the Garba Griha.

We are to assume that the two will have to continue working without a salary, as is the case in thousands of temples under HRCE control. The newcomers have been performing pujas at the Ganesha and Navagraha sannadhis. Meanwhile, a rabid leftist NGO, Makkal Kalai Ilakkiya Kazhagam (People’s Literary Arts Association), came to the temple and pressurized the HRCE Administrative Officer(AO) to make the crash course pujaris enter the sanctum sanctorum.

The AO sent them to perform pujas in the sanctum on April 19, which was opposed by the hereditary pujaris. The HRCE official told them that he was under pressure to allow them and that they would leave after taking photos standing at the sanctum’s door. But even after taking pictures, they didn’t go and started doing archana and puja. Members of Makkal Kalai Ilakkiya Kazhagam present in the temple applauded and raised slogans in support. The NGO had earlier advertised the move on their Facebook page calling people to aid them.

Tamil daily Dinamalar, which reported the incident, says that a Christian woman was part of the NGO crows, and she shouted “Long Live Tamil” during the incident. Hearing about this, BJP cadres also came to the temple, and a tense situation prevailed. Dinamalar reports that hereditary pujaris are frightened after the incident due to the involvement of rabid leftist forces and expect the judiciary to help them.

HRCE official who talked to Dinamalar said that the government would decide who will be pujaris, administrators and how to manage the temple. Speaking in support of the newcomers, he said that they have the qualities to enter the sanctum and touch the moolavar(murti of the presiding deity). He also said that just because some are Brahmins special privileges cannot be accorded to them.

As per the HRCE Act, 1959, through the HRCE board, the government can only manage temples for a certain period to put things in order and only in economic aspects. HRCE has no right to interfere in the affairs of temples in any manner. Yet HRCE continues to squat on 44,000 temples to meddle in temple affairs as per the whims and fancies of the ruling establishment and rob temple properties.

There are many temples across TN where non-Brahmins, including those from SC and ST communities, are pujaris. But DMK, its mother organization Dravidar Kazhagam, and other anti-Hindu leftist forces peddle propaganda that only Brahmins are temple priests. This specific incident shows what is their real intention as opposed to what they claim it as.