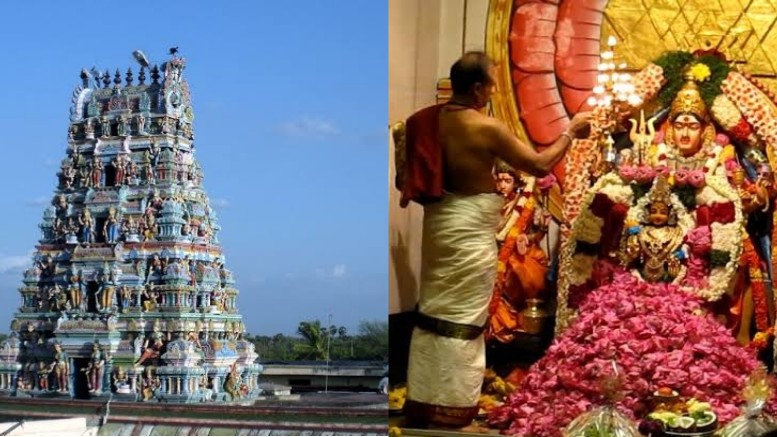 There is a propaganda that only Brahmins are pujaris in Hindu temples and the right to do priestly duties is denied to Hindus of other castes. But it is just that, propaganda. In Tamil Nadu, from the deity which is the Kula Devata of Shankaracharya to the deities who are Kula Devatas of almost one fourth of the state, are served by non-Brahmin pujaris.

MaduraKali Amman in Perambalur, Tamil Nadu is said to be the Kula Devi Kanchi of Shankaracharya. Adi Shankara himself installed the murti of the deity in the temple here. She is the Kula Devi of many Brahmin families as well. The temple was renovated by Kulotunga Chola. But the right to perform priestly duties belongs to the Vanniyar community. While the current DMK government claims to preserve social justice by appointing non-Brahmins as pujaris in temples, in this temple which already has non-Brahmin pujaris, it has imposed a rule which bars the hereditary pujaris from performing priestly duties.

For hundreds of years, the practice of appointing the eldest son of the pujari as the chief pujari is followed. However HRCE has formed new rules with age restrictions for pujaris. This has prevented the hereditary priesthood being followed. The family which has the right to priesthood has gone to the court against this move and demanded that their rights be restored.

Kulasekarapattinam Mutharamman is another deity who is served by non-Brahmin pujaris. The temple is believed to have been established by king Kulasekara Pandian. It is the only temple in Tamil Nadu that celebrates Dussehra in a grand manner. It is also the only temple in TN where both Eashwara and Parvati reside on the same platform. Eashwara presides here with the name Gnanamurtheeswarar. During Dussehra more than 10 lakh devotees from all over the world visit the temple. This temple also comes under the control of HRCE.

Another prominent temple where non-Brahmins are hereditary pujaris is Madurai Pandi Muneeswarar temple. The presiding deity of the temple is believed to be the reincarnation of Pandya King Nedunchezhiyan. The deity itself was discovered by a married couple after the deity appeared in the wife’s dream. Till today the descendants of the couple perform the priestly duties in the temple. They belong to the Mutharaiyar jati which was a ruling and warrior clan in the period of Cholas. There is not a single day when the temple doesn’t have devotees except during Covid-19 restrictions.

Ponnar-Shankar, Kannimar Amman temple in Veerapur near Trichy is also another prominent temple where Mutharaiyars retain the right for priestly duties. The deities of the temple are Kula Devatas to many castes such as Kongu Vellala Gounder, Mutharaiyar, Ambalakarar, etc. Sapta Kannis are worshipped in this temple. Both Pandi Kovil and Kannimar Amman temples do not come under TNHRCE even though lakhs of devotees visit them and offer dakshina.

Punnainallur Mariamman, installed as the guardian deity of Thanjavur, the capital of Cholas, is another prominent deity served by non-Brahmin pujaris. Even though the deity dates back to the Chola period, the temple in its current form was built by Thanjai Maratha kings. The deity cured the blindness of the daughter of king Tulaja who built the temple in its current form in the 1700s. Even though the temple is under the administration of Thanjavur palace Devasthanam, it also comes under the control of HRCE.

These are only a few temples, prominent ones at that, where non-Brahmins are hereditary pujaris. There is often an accusation that non-Brahmins are pujaris only in non Agamic temples and that Agamic temples like Madurai Meenakshi and Chidambaram Nataraja temples that earn “crores of money” are kept in Brahmins’ control. However the temples listed above also have properties worth crores and are in encroachment even though they are under HRCE control. For example properties of Punnainallur Mariamman temple are encroached by Muslims who haven’t paid rent/lease for years. Whether it is the customs/sampradayas or the properties, mismanagement of temples at the hand of HRCE is evident. Yet Dravidianists and Periyarists want the margiinalised to vie for the Thattu Kasu(money put in plate) of a poor Brahmin pujari instead of making them economically strong.