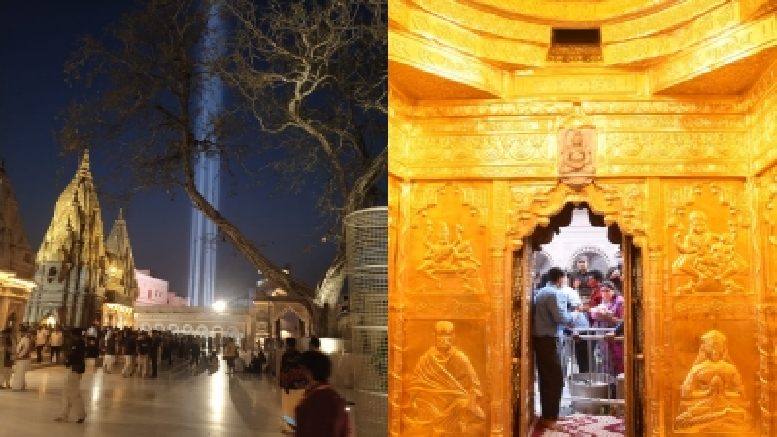 An anonymous donor has donated 60 kg gold to the Kashi Vishwanath Temple (KVT) and 37 kg of this has been used on the inner walls of the sanctum sanctorum.

The pilgrims visiting the temple got glimpses of the gold plating on walls while offering prayers through ‘jharokha darshan’ (seeing the deity from outside the doors). The visuals released by the temple administration when Prime Minister Narendra Modi offered prayers on Sunday gave a broader look.

Divisional Commissioner Deepak Agrawal said, “The temple has received 60 kilograms of gold from an anonymous donor. Of it, 37 kg has been used for the gold covering of the inner walls of the sanctum sanctorum and the remaining 23 kg gold will be used for covering the lower portion of the golden dome of the main KVT structure.”

The donor had come in contact with the temple authorities, months before the formal opening of Kashi Vishwanath Dham by the Prime Minister on December 13, 2021.

Following his offer of donation, the temple authorities had also finalised the plan that the donated gold would be used for gold plating of the inner wall of the sanctum sanctorum and also the lower portion of the main temple dome.

Agrawal said, “A Delhi-based firm was engaged to complete this work. The artisans of the firm did the casting of the artistic walls of the sanctum sanctorum with copper sheets. After fixing it with the wall, the process of gold plating was done.”

This is the second major work of gold covering of any part of the temple after the 18th century.

According to the history of KVT, following the reconstruction of the temple by Indore’s queen Maharani Ahilyabai Holkar in 1777, Maharaja Ranjit Singh of Punjab had donated about one ton of gold, which was used for covering two domes of KVT.

After the 18th century, the major work for expanding the shrine area of KVT was ensured by the Prime Minister after the Bharatiya Janata Party came to power in Uttar Pradesh in 2017.

The project of over Rs 900 crore was launched in the name of KV Dham (corridor), under which over 300 buildings were purchased and removed to expand the shrine area from 2,700 square feet to 5 lakh square feet by giving it a direct connectivity with the river Ganga through Jalasen, Manikarnika and Lalita ghats.