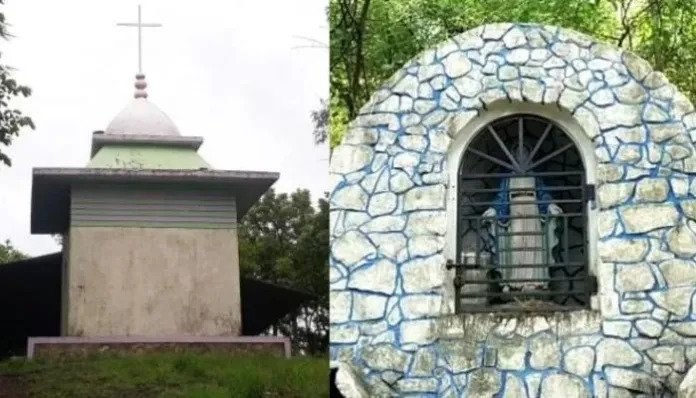 An ancient Hindu temple was demolished in Gujarat’s Tapi and a church was constructed on the site. Hindus have also been prohibited from offering prayers. The temple was located in a village in the Songarh taluka where local Christians built a church named Mariam Mata’s Temple. The discovery was made when some Hindus reached the place to offer prayers at the temple on October 2.

“In the Nana Bandarpada village of the Songarh taluka in the Tapi district of Gujarat, there was a temple of Gidhmadi Aya Dungar Mata where local Hindus used to offer regular prayers. The temple was situated on the hilltop. But over time, due to the rapidly growing Christian population in the area, the movement of people on this hill gradually decreased and after that, the Christian missionaries demolished the temple and established their place of worship in this place and called it Mariam Mata’s Temple”, notes OpIndia.

Hindus reached the ancient holy site to offer prayers as the festival of Navratri was going on. A mob of Christians arrived at the same time and began creating a scene by not allowing Hindus to go up the hill. Following the ruckus, police reached the spot.

“We had come to worship as the festival of Mataji was going on, but the local Christians did not allow us to go upstairs and quarrelled saying that you have no place above,” said Dineshbhai Gamit. He added that the Christians had arrived well-prepared and armed with a huge number of stones, sticks, and other such items. The Hindu priest was slapped and the Christians also tried to damage the plate containing food offerings for the Devi. The situation was brought under control by the police.

Hindus have been worshipping at the temple for many centuries but increasing conversion has led to a rise in the Christian population. As a result, the movement of Hindus to the hill became restricted. OpIndia quotes a local as saying that the village is now 98% Christian. As Hindus are in minority, they have not been able to raise their voice. Furthermore, important posts such as that of the sarpanch are now occupied by Christians.

A resolution was passed to renovate the temple but a church was constructed instead. In this regard, the OpIndia report says “In 2019, the Bandarpada gram panchayat of Songarh taluka in the Tapi district passed a unanimous resolution stating that the temple of Gidhamadi Aya Dungar Mataji had been worshipped for many years and there was a need for a renovation around it due to high movement of devotees. There was no mention of a Christian church or any other place of worship”.

Local Hindus alleged that though the panchayat passed a resolution in the name of the temple of Gidhamadi Mataji, it used the grant that it received to build the church. The Devi’s temple was demolished and its broken remnants were found close by. In the meanwhile, Hindu organizations have demanded the restoration of the temple and its deity. Community leaders said they would fight for their rights and submit an application to the collector in this regard in the coming days.