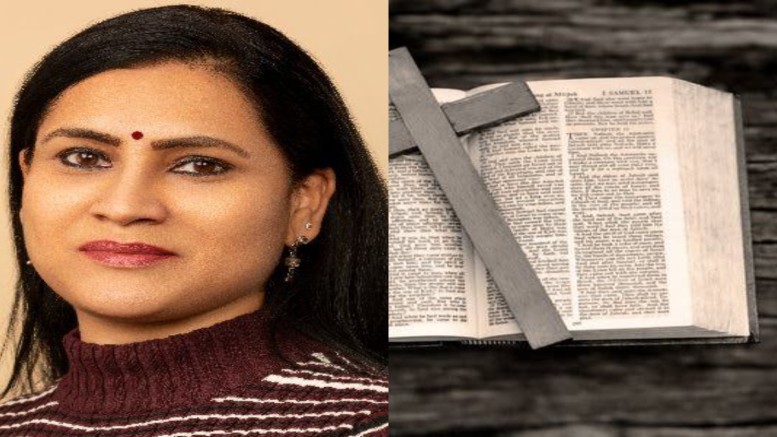 Enabled by  her Master’s degree as well as her former faith, she has gained expertise in Christian doctrines and practices. She is engaged in debates on local TV channels in addition to actively fighting conversions at grassroot levels in rural India. She also counsels Hindu families whose youngsters  have either become Christian or are contemplating Christianity. Through her recently launched Quit Christianity movement, she works with other former Christians in bringing awareness about Christianity.

In the first of a series of interviews  for the HinduPost, Esther Dhanraj talks about  her journey from a practising Hindu to a Christian when her parents converted to Christianity.

Please tell us about your growing up years in a conservative Telugu Brahmin family.

We were an urban but conservative Brahmin family. I lived with my parents, my four siblings, a cousin who my parents adopted, my maternal grandmother and our dogs. My father was a Gayatri upasak and my mother observed a different vratam each day of the week. I grew up watching my grandmother do Pratah Sandhya Vandanam. I vividly remember the Surya Namaskara mantra that she taught us. Our puja mandir was complete with a large Vyasa peetham over which an ancient Bhagavatam was placed. My father performed Rudrabhishekam on every ShivaRatri. Our home always smelled of camphor and sambrani. Agnihotram was performed many times in a year.

My grandmother practiced Ayurveda. Hence medicines meant homemade herbal concoctions. Even ointments and lotions were homemade. We followed the lunar calendar except for official purposes. Following the Panchang was very important.

Yet, I must say our Hinduism was limited to festivals for us siblings and rituals of  the elders. Other than that, there wasn’t much instruction in terms of Hindu philosophy. Neither was there any engraining of a general sense of pride of being a Hindu. My grandmother helped us perform pujas during festivals. We celebrated them with a lot of pomp. Besides new clothes and lavish food, my parents did the related pooja itself with grandeur. The deities we brought home for Dussehra and Ganesh Chaturthi were magnificent. Our Diwali went on for days after the actual festival. That was Hinduism for us.

What are some of the Brahmin values and beliefs that you still carry with you?

Brahmins are known for being seekers as well as imparters of knowledge. By that definition, I like to think of myself as a life-long student. I am not ashamed to admit my  mistakes. Perhaps it is this value system that helped me pause in my Christian journey and think, the moment I found evidence contrary to my faith. My quest for knowledge makes me a willing learner even if my teacher were a kid! As for imparting knowledge, educating others of what I know has always been a part of me. I still am engaged in education, albeit, of another kind.

The food habits of Brahmins stand out. My food habits, for the most part, remained Brahminical. For example, even as a Christian, I could never lose the taste for hing! My kitchen cabinet has always remained my medicine cabinet, just like my grandmother taught me. Some of the other beliefs that stayed with me through my Christian life, are postpartum and infant care methods, and menstrual care.

How and when did your parents convert to Christianity?

I was about 13 years when my family was first introduced to Christianity. It was a slow transition for them as it was for my siblings and I. We were going through a rough patch in life with my mother falling slightly ill and needing a minor surgery around the same time as my father lost his well-paying job. We were living in Odisha (Orissa) at that time. We had a Christian neighbour who got a whiff of our situation. He convinced my parents that the reason our comforts were taken away was because the Christian god had chosen our family to be “saved.” Thus began my parents’ journey into Christianity.

Soon after my mother’s surgery in Hyderabad, my family moved from Odisha to Hyderabad. Christianity had almost devoured this part of the South, compared to Odisha. There were several churches all around our aunt’s place where we first moved to. And the moment these different congregations saw that here was a vulnerable family that they could prey on, they began visiting us.

The neighbours from Odisha visited us too, with his wife. Each time they visited us from their home town, Chennai, they stayed with us for a few days. During their stay they conducted continuous fasting prayer sessions giving my parents the assumption that they really cared for our family while all our Hindu relatives had left us to our fate. They pursued till my parents completely abandoned their Hindu identity, which took barely under a year. Meanwhile, a local church caught on with the opportunity to “maintain” my parents’ conversion status intact.

How did it impact your siblings and you?

As I said, my siblings and I were given the most secular upbringing, as was the norm during the 1980s among Hindu families. At the same time, we were taught to trust our parents, like any other Indian kid of the 1980s. If our parents thought that converting to Christianity was the right thing to do, it had to be the right thing. We had no problem initially as it began. I had no clue what was happening.

In retrospect, I’d say, it would not have mattered to me even if I knew what was happening. We just wanted our troubles to go away and our old times of sumptuousness to return. My grandmother who was a devout Hindu had no problem with our neighbour coming to our home to preach. She was a learned but a typically “tolerant” Hindu.

When did your siblings and you decide to convert?

I have an elder sister, two elder brothers (one deceased now) and a younger brother. At the peak of my family’s conversion process, my sister was working in another city. My oldest brother who was in his late teens was mostly outdoors as boys that age are. My other elder brother, on the other hand, was a sickly child and did not come across as a proactive boy. My younger brother was very young to be targeted. That left the proselytizers that visited our home, with me. They saw that I was not only a teenager but also a proactive and outspoken teenager. To their advantage, I was always available whenever they visited, unlike my oldest brother and my sister. Fasting prayers by the Chennai proselytizers continued.

The lady prayed one day and told me, “God has chosen me to be his vessel to lead several more to salvation.” She said, “ The Lord was speaking with me” and told her that I had a gift of healing! It was not completely sold to that fortune-telling. At least, not instantly. It would take me several years as a practicing Christian to be led into the delusion that I could “deliver someone from their affliction” by merely laying a hand over them and praying. The prayer meetings continued and my family began going to church every Sunday. My parents were baptised sometime in 1987. At that time, my eldest brother hung out with RSS and initially, he protested against proselytizers visiting us for weekly prayers. Soon, he succumbed too.  Among the siblings, the brother immediately older to me and I were the first to get baptised in 1992. In the next four or five years, my other two brothers converted too. My sister was the last to get converted. Her baptism happened as part of her pre-wedding rituals.

My parents were very giving; they were charitable people who believed that giving to a needy person in sight was more important than saving away as a  pre-emptive measure for an out-of-sight need. Our home was open to anybody and everybody that needed a place to stay and  have a meal. Their philanthropical position was now lost. Personally, the biggest challenge I had was to come to terms with the fact that my home that was once crowded with our relatives (many of whom were strangers to us siblings) was practically empty now. I did not like the fact that now people did not “need” us. Perhaps my parents, especially, my mother who enjoyed her position as a giver, felt this too.

The church embraced us. Or so we felt. The first few churches that we attended as new converts were mostly congregations with low literacy. Most of them came from economically disadvantaged classes and scheduled castes. We were treated as celebrities by these congregations. Everywhere, the pastors made it a point to identify us and say a few good words about our family. Even though it did not affect my parents one bit, given their past status in society, it was very exciting for me as a teenager. I began believing what the Chennai lady told about being the Chosen One!

I liked the new identity. In fact, it felt like the only identity I ever had, given the fact that I had no memory of my Hindu life. Christianity was my only identity. I began maturing as a Christian. I learnt to pray in both Telugu and English. I was invited to speak in youth meetings, addressing new or potential converts. I was kind of a celebrity in my own right. As years passed, my belief in me being the Chosen One grew stronger. I found my calling, my higher purpose.