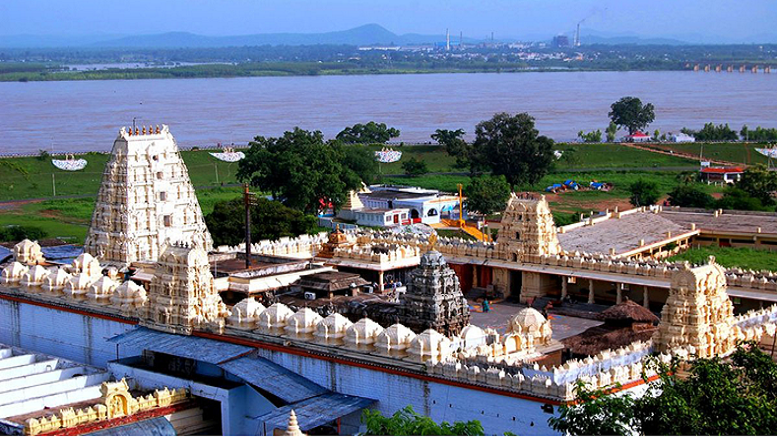 Sri Sita Ramachandraswamy Temple is a Hindu temple dedicated to Sri Rama located in the town of Bhadrachalam in Bhadradri Kothagudem district of Telangana,Bharata.It is one of the Divya Kshetrams on the banks of the Godavari river and is popularly known as Dakshina Ayodhya, akin to the city of Ayodhya in Uttar Pradesh.

The presiding deity is Vaikuntha Rama, an unusual form of Sri Rama with Shankha in the upper right hand and Chakra in the upper left hand and a bow and arrow in the lower left and right hands respectively with Maa Sita sitting on his lap and Lakshmana. The murti is Svayambhu or self-manifested.

The place is associated with Rama in more than one way. He spent a part of the 14 years of his “Aranya vasam” (exile) accompanied by his spouse, Sita and his brother, Lakshmana. A few kilometers away from the temple is the Ushna Gundam. It is said that Lakshmana had brought hot water from here for Sita to bathe. About 35 km away from Bhadrachalam is the Parnasala, believed to be the hut where Rama, Sita and Lakshamana lived during their exile in the forest and where Sita was abducted by the demon king of Lanka, Ravana. 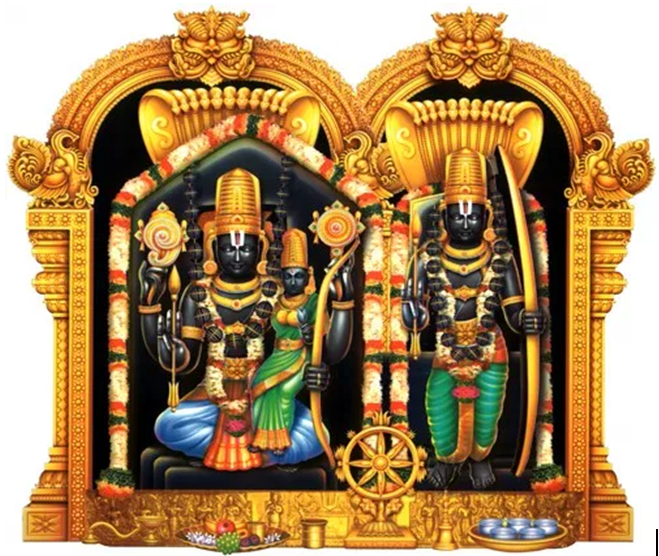 Bhadrachalam and Vijayanagara are sites said to have been closely associated with the Ramayana. Rama, Sita and Lakshmana are said to have stayed at Parnasala, 35 km away from Bhadrachalam. Rama is said to have crossed the river Godavari on his way to Sri Lanka to rescue Sita, at the spot where the Bhadrachalam temple stands, on the northern bank of the river.

Itihasa has it that the son of Meru and Menaka, Bhadra, performed penances towards Rama here. But Rama had to find and rescue his wife from Ravana, so he could not give him his blessing then.

As Rama could not fulfill his promise during his present incarnation, sage Bhadra continued his penance more vigorously. Lord Vishnu remembering his promise appeared before Sage Bhadra with Sita and Lakshmana desiring to sit on the head of the great sage as per his wish.But in a hurry to do so,Vishnu had forgotten the transcendental,handsome form of Rama.

Hence,he appeared with four hands with Shankha in the upper right hand and Chakra in the upper left hand and a bow and arrow in the lower left and right hands respectively with Maa Sita sitting on his lap and Lakshmana,thus fulfilling his devotee’s wishes by also turning him into a huge hill. Hence,the place was named Bhadrachalam.

In the 17th century CE, Pokala Dhammakka, a tribal woman living in Bhadra Reddy Palem, found the central icon of Rama in an anthill. She dissolved the anthill using the water from the Godavari River. With the help of the villagers, Dhammakka constructed a mandapam (hall) and offered prayers to the deities.

During the reign of Abul Hasan Qutb Shah (1672-1686), Kancherla Gopanna served as the tehsildar (revenue officer) of Bhadrachalam.Gopanna was given the title of Ramadas (Rama’s servant) by Kabirdas, a Muslim saint who was impressed with his charity.

Following the Shah’s orders, Gopanna enforced the Jaziya tax, a penalty designed to force Hindus to adopt Islam. Observing the dilapidated state of the temple, Gopanna decided to build a temple for the deity by raising donations.In the initial attempt, Gopanna received harsh criticism from the local Hindus for enforcing the tax. Dejected by numerous rebuffs, Gopanna decided to use a portion of the tax collected to build the temple and face the consequences.

The temple was completed at a cost of nearly six lakh varahas. After learning the truth, the Shah was enraged, and Gopanna was summoned to the court. Gopanna explained that he never intended to misuse the treasury funds and planned to reimburse using donations he expected to receive in the future.The Shah ordered his soldiers to hang Gopanna if the sum was not repaid within twelve years, and imprisoned him. On the last day of the twelfth year,Rama and Lakshmana appeared in Shah’s dream and repaid the entire sum in Rama madas (gold coins with Rama’s inscriptions on them).

When the Shah woke up, he saw real gold coins and released Gopanna. He gave Gopanna a pension for life and donated the area around Bhadrachalam as an endowment to the temple.Some scholars dismissed the idea of Rama paying the money, saying that the Shah had held a fair and impartial inquiry, found Gopanna innocent, and exonerated him with due honor.

The temple was a part of the Godavari district until the end of the Visalandhra movement, after which the town was merged into Khammam district in 1956. The temple’s maintenance and administration were undertaken by the endowment ministry of the Government of Andhra Pradesh in 1958. Repairs were made to the temple in 1960 under the supervision of the then-endowments minister Kalluri Chandramouli.

In August 1986 the temple faced a severe threat from flash floods in the Godavari River. The main streets and several structures, including cottages, were submerged in water for nearly five days. Many local people took shelter in the halls of the temple. The kalyana mandapam (marriage hall) was completely inundated except for its gopuram (temple tower). P. Seshacharyulu and other priests stayed in the temple and performed all the daily rituals without any interruption during the floods.

The temple is divided into three parts. The first is believed to be the head of Bhadra, where a shrine is dedicated to him. Inside, on a rock structure, the supposed footprints of Rama can be seen. Thirunamam(a white clay) is applied to the rock so that the visitors can recognise it as Bhadra’s head.The second part of the temple is the sanctum where the central icon resides on a place considered equivalent to Bhadra’s heart. The third part is the Rajagopuram (main tower), which is located at Bhadra’s feet.

The temple has four entrances; there are 50 steps to be climbed to reach the main entrance.In 1974, a huge door named the Vaikunta Dwaram was built to ensure proper management of the visiting devotees.Directly opposite to the sanctum is a gold-plated dwajasthambam (flag post).It is made of panchaloha (a five-metal alloy), on which are carved images of Garuda, the vehicle of Vishnu.

On the top of the vimana of the sanctum is an eight-faced Sudarshana Chakra with a thousand corners, that was engraved by Gopanna, who found it lying in the waters of the Godavari River.On the vimana, a miniature of the temple’s deity can be seen. The entrance for devotees, who have purchased a special visit ticket, is towards the left of the sanctum. The regular visitors have to wait in a queue that leads straight into the sanctum.Housed in an area to the right of the sanctum are the festival icons of Rama, Sita, and Lakshmana, which are worshipped daily.

The central icon housed in the sanctum is considered Swayambhu (self-manifested). Rama is seated in a padmasana posture, with Sita seated on his lap. Rama’s four hands hold the conch, disc, bow, and arrow. Lakshmana stands to his left.

On a taller hill, Gopanna installed and consecrated the icon of Ranganatha, a reclining form of Vishnu, which faces the south.The place is popularly known as Ranganayakula Gutta (hillock of Ranganatha). Opposite the Ranganatha sanctum is a temple dedicated to his consort Lakshmi Thayar. These two temples were included by Gopanna to follow the tradition of Srirangam Ranganathaswamy temple.The temple houses a number of other shrines.

Hanuman has two shrines in the temple: the Abhayanjaneya temple at the river bank and the Dasanjaneya temple in the Thiruveedhi (divine passage) of Bhadrachalam.In the Rajaveethi (royal passage) of the temple, a shrine of Govindaraja Swamy (a form of Vishnu) can be found where the festival icons of Bhadrachalam spend some time during the Thiruveedhi utsavam festival procession.On the way to the main temple from the river bank, a shrine is dedicated to Yogananda-Narasimha. The icon is believed to be Swayambhu and very powerful.

Next to the Lakshmi Thayar temple is the Rushya Mookham Exhibition centre. In the centre, the Rama mada coins given to the Shah, jewellery made by Gopanna for the deities, and other important items are housed. The jewellery includes the chintaku pathakam (a necklace studded with rubies), kiritas (crowns), plaited decorations, and a mutyala haram (chain of pearls).

In the outer ambulatory passage of the temple, there is a hall called the Nithya Kalyana mandapam or kalyana mandapam, intended for conducting the marriage festival of Rama and Sita. On the Ranganayakula Gutta is a temple dedicated to the god Shiva, who is worshipped as Ramalingeswaraswamy.

Near the kalyana mandapam, there is a hermitage named Govindaswamy matham where many saints stayed in the past.A huge hall named Mithila Stadium was built facing the Vaikunta Dwaram. Its construction was initiated by Jalagam Vengala Rao and was completed at a cost of ₹3.8 million.The icons worshipped by Narasimha Dasu are housed in the Amba Satram, which is located at the southern end of the temple.

1. Most Rama temples have the deity with two hands.However,this is the only Rama temple in the world where the deity has four hands with Shankha, Chakra, bow and arrow.

2. Rama is found in the Padmasana posture with Sita on his lap which is not seen in other temples.

3. The procedures for worshipping the idol are the same as that of Ranganatha Temple in Srirangam who is the family deity of both Rama and Krishna which is unusual.

4. In the sanctum sanctorum, the idol of Chakrathalwar was installed by Gopanna after praying to Rama because it was so heavy to lift.