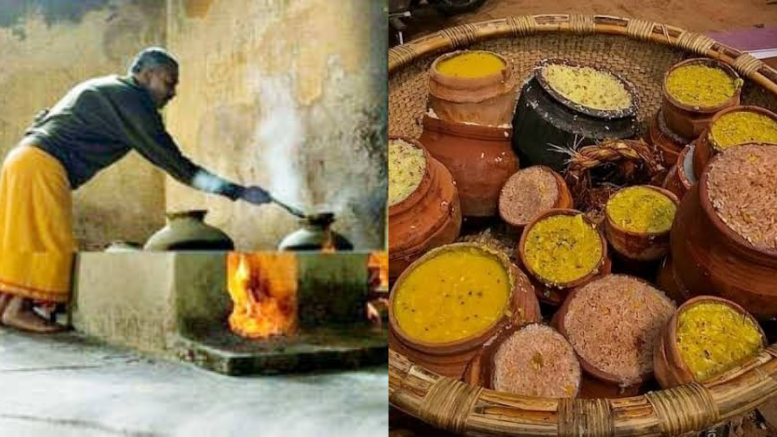 40 traditional chulhas in the kitchen of Puri Jagannath temple have been vandalised by unidentified miscreants. They were destroyed after the food for evening puja was prepared. The district collector has ordered an inquiry into the issue.

Puri district collector Samarth Verma has ordered a joint inquiry by police and temple authorities. He assured that strict action will be taken against those who are responsible for this incident. Rosa Ghar is considered as the largest kitchen in the world. Around 300 quintals of rice is cooked there everyday as Mahaprasad.

Only one or two of the ‘Kotha Chulhas’ used to prepare the offerings for the presiding deity Jagannath were damaged in the vandalism. So it didn’t affect the rituals of the temple but the morning puja was delayed by 30 minutes. As only the cooks employed by the temple are allowed inside the kitchen, CCTV footage is being combed through to find the people behind the incident.

It is believed that Devi Mahalakshmi herself cooks in the kitchen and the cooks act only as her servants. 600 cooks and 400 assistants work in the kitchen. The fire in this kitchen is never out out and is called as Vaishnava Agni as it is believed that Maha Vishnu himself alighted it. It is considered as a holy place and the vandalism of the hearths has greatly upset the devotees.

The Odisha government has been facing criticism for its construction projects around the Jagannath temple which are part of its ambitious Puri Heritage Project. The 12th century temple is under Archeological Survey of India’s protection and construction works within 100 meter radius of the temple are prohibited. Bhuvneshwar BJP MP Aparajita Sarangi raised the issue of the Odisha government violating Ancient Monuments and Archaeological Sites and Remains (AMASR) Act in the parliament.

She said that while it is necessary to obtain NOC from ASI for carrying out construction work in the vicinity the state government has not obtained it. Pinaki Mishra, BJD MP from Puri denied her accusations saying that the National Monument Authority (NMA) had issued an NOC. But Sarangi alleged that it is only a letter and not the NOC and demanded that digging should be stopped to preserve the centuries old temple.

In March ASI had written to the government expressing fears that the huge earth moving machines and excavators used for digging pose threat to the structural stability of the temple.

The Puri Heritage Project has drawn a lot of criticism in social media as well with people voicing their concern about loss of heritage buildings due to the unmindful actions of the Odisha government.

Many centuries old maths, some of them established by Acharyas like Sri Rammanuja, were demolished to make space for the heritage corridor. Organisations like Indic Collective opposed the actions of the Odisha government and even went to court against it. With the chulhas being vandalised the issue has gained importance again.

TN: Amman murtis disrobed and semen ejaculated on them