2 incidents of murti vandalism in TN, two Muslim men and a “drunkard” arrested 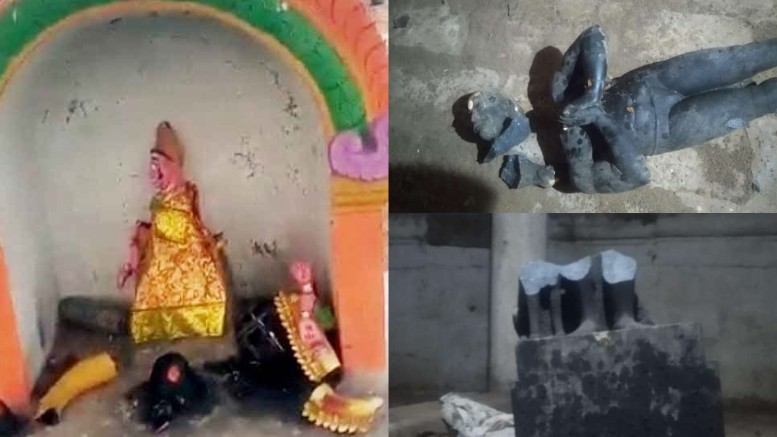 In two different incidents, murtis of Hindu deities have been vandalised in Tamil Nadu. In one of the incidents two Muslim youth have been arrested for vandalising the murtis in a “drunken state”. In the other incident another “drunkard” was arrested. It has become a norm for TN police to dismiss temple attack and vandalisation cases as ones perpetrated by “drunkards” and “mentally unstable” people.

Daily Thanthi, a Tamil daily reported that the Amman murti at the entrance of the Mariamman temple in Ottapalayam village near Kangayam in Tirupur was found in a vandalised state on February 14. Temple authorities had lodged a complaint with the police. Upon investigation police arrested Sahul Hammed (27) and Mohammed Sadiq Basha (22), employees of a biryani shop.

An argument ensued between Thangavel and the Muslim men. Mohammed and Hameed threw stones at the Amman murti as a result of which it was broken into 3 parts. Hindu Munnani has condemned police’s lackluster approach in this case and questioned why all those who attack temples and vandalise Hindu murtis are termed as “drunkards” and “mentally unstable”.

In another incident in Thanjavur, murti of Bathragiri siddhar (a Tamil sage) was found to have been removed from its plinth and vandalised. Bathragiri is a disciple of revered Tamil saint Pattinathar. His murti in the Mahalingeswarar temple in Thiruvidaimarudur was reportedly vandalised on February 14. Those who are afflicted by Brahmahatti dosham come to this temple for parihara pujas.

Only those who visit the temple for parihara go to the west dwara, where Bathragiri’s murti is installed. The west dwara was last opened on January 17 and remained closed after that as no one visited the temple for parihara puja. Pujaris went to offer naivedyam and perform pujas on February 14 and found the murti broken and lying on the floor. The 350kg murti was removed from its plinth and was lying with broken hands, legs and severed head on the floor.

Temple authorities had lodged a complaint with the police who based on CCTV footage arrested one Marimuthu. Police said that he was drunk and frustrated and vandalised the murti in an intoxicated state. TN BJP chief K.Annamalai who was in Thiruvidaimarudur to campaign for local body elections visited the temple and expressed doubts about police investigation.

He said, “We are unable to accept the police’s version that the perpetrator was in a “drunken and frustrated state”. There is a suspicion that whether police arrested someone (Marimuthu) due to pressure and show him as the perpetrator. Police should investigate in a fair manner and reveal the truth. Only then will such incidents stop”.

In January a Muslim convert had vandalised murtis of Hindu deities in Dindigul and was arrested only after Hindu organisations protested against police inaction. Initially police tried to dismiss it as a case of drunken vandalism. Similarly another Muslim man had set fire to two temple chariots in Perambalur and admitted the same in a video. However police let him off saying he was “mentally unstable”. This is becoming a norm in temple attack incidents.

Perhaps it’s not surprising considering the fact that the ruling DMK appears to favour minorities unabashedly. CM MK Stalin himself said in a church event that “the government was formed by them(Christians)”. A Catholic priest, George Ponnaiah, had said that DMK forming government is due to alms(votes) provided by Christians. No one in DMK condemned his remarks. In fact a minister of the DMK government said “DMK won because of Christian prayers” in another Christian event.