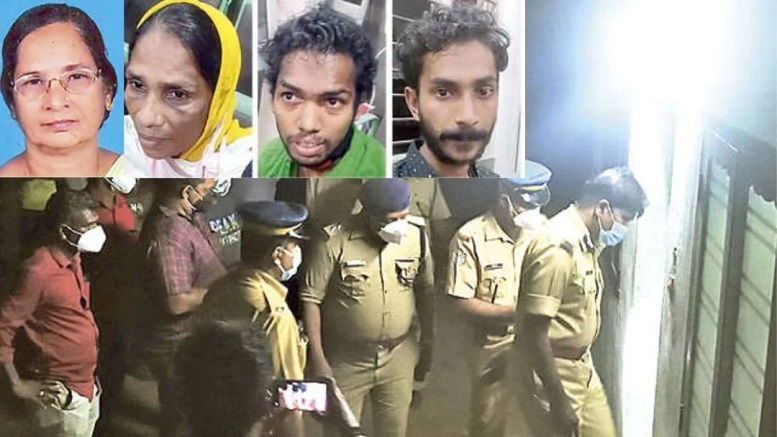 The body of 75-year-old Shanthakumari was discovered from a house at Vizhinjam near Kovalam beach, Thiruvananthapuram. She had been hit on the head with a hammer, strangled with a shawl and her gold ornaments were missing. Kerala Police arrested Rafeeqa Beevi (50), her son Shafiq (23) and Rafeeqa’s boyfriend Al Amin (26) within an hour of the cold-blooded murder.

All three accused were staying together in a rented house. Rafeeqa and her boyfriend had an argument last week and they smashed the doors and furniture of the house. Following this nasty incident, the homeowner’s son asked the family to vacate the home by Friday.

On Friday, he came down to check and found the keys to the house on the door. He called out but there was no response from inside.

When he opened the door, he had the shock of his life when he saw blood dripping from the attic. The neighbors were alerted and upon examination, they found the body of the elderly victim. Vizhinjam police were informed.

Rumors spread that Rafeeqa had died and her relatives started to gather. Meanwhile, the police checked the tower location of the accused and found that they had not gone far and were near the central bus terminus. The accused had boarded a private bus going to Kozhikode.

Police confirmed that she was brutally murdered and the suspects shifted the body to the attic before escaping. Shantakumari’s bracelets, rings and earrings were missing and police found that the accused had sold them at a jewelry store near Vizhinjam. Why or how Shantakumari reached there is unknown.

Shanthakumari is survived by Sanalkumar and Sivakala. Multiple crimes are being reported from Thiruvananthapuram on a daily basis which brings us to the same question as to how safe is the capital of Kerala?