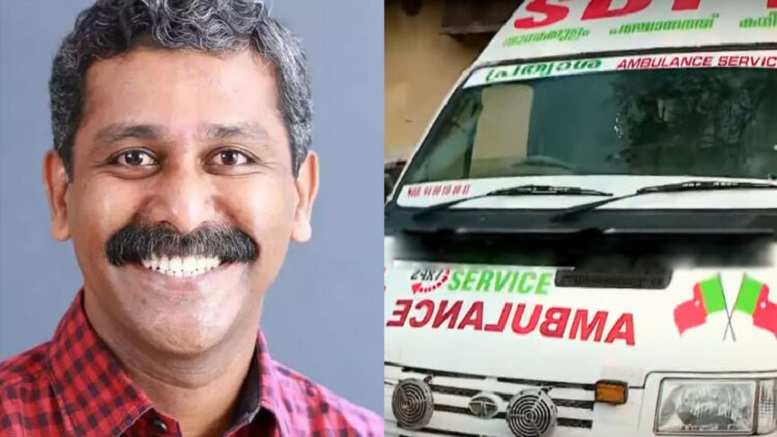 Popular Front of India (PFI) killers have reportedly attacked and killed yet another BJP state-level leader in Alappuzha city of Kerala. Advocate Renjith Sreenivasan was the OBC Morcha state secretary and a member of the BJP state committee who had contested the 2016 Assembly elections in the Alappuzha constituency as the BJP candidate.

There is a clear pattern of political assassinations of BJP workers and the brutal murder of the state leader has shocked the state and Kerala remains tense. Renjith is the third BJP/RSS worker who has been killed in recent months in Kerala. He leaves behind a wife and two young girls.

The attack happened in Alappuzha city early today morning at his house when he was getting ready for a morning walk. Media reports suggested that the killers used an ambulance to reach the spot. It was a pre-planned attack where the attackers reached the house at 6 AM, broke open the front door and hacked Renjith several times in front of his mother.

Neighbors said that he was hacked in such a way that there was no use taking him to the hospital. Police recovered the ambulance from Alappuzha district limits and detained 11 Social Democratic Party of India (SDPI) workers and deadly weapons were recovered from the vehicle. Police did not confirm whether those in their custody actually took part in the killing but said that they are being questioned. SDPI is the political arm of the quasi-terrorist organization PFI, which the NIA has recommended should be banned.

Renjith’s murder is the second political killing to happen within 24 hours in Kerala. On Saturday night, an SDPI state secretary K S Shan was also attacked by a gang. The assailants stepped out of the vehicle and hacked Shan several times. He was rushed to a local hospital in Alappuzha and later moved to a Kochi hospital but he died around midnight.

Alappuzha district police superintendent G Jaidev said police are checking whether the killings are related and retaliatory in nature. “A few persons have been taken into custody in connection with the killings. There was no laxity on the part of the police to monitor the situation after the last day’s killing (of the SDPI leader). We had deployed more force in several areas after the Saturday night’s killing, but could not prevent the Sunday’s killing,” he said.

Alappuzha SP said that prohibitory orders are in place in the district for two days. Police deployment has been strengthened on the premises of Government Medical College in Kochi, where the body of the SDPI leader K S Shan is kept. A large number of SDPI men are camping at the premises of the medical college hospital.

Police checks had been increased after Shan’s killing and that is why the SDPI killers used the ambulance. Using such dirty tactics will affect seriously ill patients in the future. An ambulance was also used to ferry weapons when a PFI mob attacked a police station in Dakshin Kannada district of Karnataka a few days back.

Extremists use ambulances as part of guerrilla warfare to confuse and neuter law enforcement, globally.

BJP leaders including Union minister of state V Muraleedharan had made it clear that his party had no role in Shan’s killing. He added that the Communist regime is trying to blame BJP for political murders without any evidence. This is a tried and tested tactic for CPM. IPS K Radhakrishnan (retd) had revealed how a Muslim man Md. Fazal was murdered by CPM workers in 2006, and then they tried to implicate RSS for the crime.

When Radhakrishnan went against CPM ministers and arrested two of their cadre based on his investigation, the regime went after him with a vengeance – first assaulting and framing him in an immoral trafficking case, and then depriving him of pension and other benefits after retirement. Last month, Radhakrishnan suffered an ‘accident’ while crossing the road outside his house.

By shielding terrorists as part of their appeasement politics, the communists are encouraging Islamic terrorism in Kerala, observers say. Unless Chief Minister Pinarayi Vijayan who also handles the home ministry takes strict actions against political killers, such assassination will continue. But then again, CPM itself has its hands red with such murders.

The CM himself has been alleged to have advised his party workers in 2008, when he was CPM State Secretary, to follow the Bengal communist style of killings opponents – ‘bury their bodies in a deep pit along with a sack of salt. The world never comes to know about the blood, photographs or the news about such killings.’

A history of violence against the RSS/ BJP

Off late, SDPI has been playing with the blood of innocent BJP, RSS workers and in March had murdered a young ABVP leader named Nandu at Alappuzha. Mansoor, the main accused still roams free and another was let out on bail after charges were allegedly diluted.

Last month, another RSS worker named Sanjith was murdered by SDPI killers at Palakkad in front of his wife. The incident at Elappully shocked Kerala since Sanjith was stabbed more than 50 times in plain daylight.

There is also concern amongst a section of BJP and RSS workers in Kerala as to why the central government is not intervening effectively in the murder of their own workers. They ask that if a state-level leader of the BJP is not safe inside his own house, what protection can the state offer its citizens? This is exactly what the Islamic terrorists want, strike fear into the minds of Hindus and create the notion that they are on their own. They seem to be succeeding.

From Kerala to West Bengal, the cycle of political violence in which Hindus are the primary sufferers is just not ending. Neither courts, media, intelligentsia or governments seem to be bothered. Even the hint of trouble in BJP-ruled Tripura shakes the ‘constitutional conscience’ of our institutions, especially judiciary, and corrective action is immediately ordered. A court-monitored SIT is formed to probe an accident in Lakhimpur Kheri when aggressively protesting ‘farmers’, including some Khalistani elements, cause 4 people to be crushed under an out-of-control vehicle. But no is bothered about justice for the 3 people – two BJP workers and the driver – who were lynched by the ‘farmers’ after the accident.

It may sound cynical, but Adv. Renjith Sreenivasan will most likely become just another name in the list of murdered RSS-BJP workers. The investigation into his brutal murder will peter out once it goes out of the media glare, and gets trapped in the labyrinthine maze of our legal system.