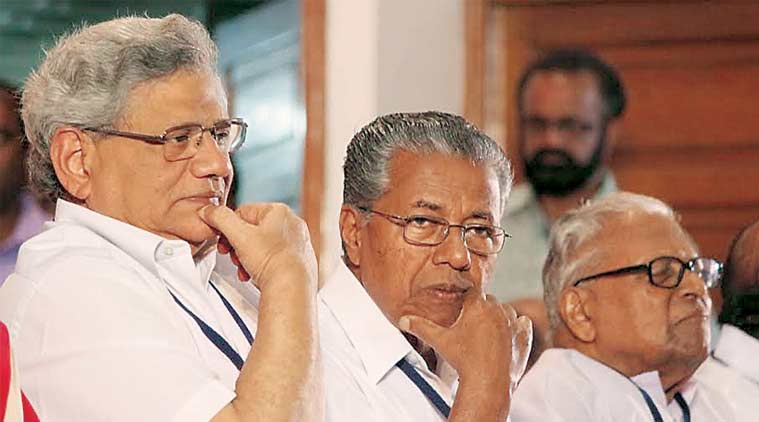 Belying the claims of Kerala CPM State Secretary Kodiyeri Balakrishnan that the murder of RSS worker E Rajesh was due to ‘personal rivalry’, 12 people arrested in the case by police so far are either CPM party workers or supporters. The FIR also stated that it was a political killing triggered by the regional political rivalry.

RSS leader E Rajesh (34) was waylaid and brutally murdered by a group of CPI(M) workers when he was returning home after buying milk. He received more than 52 stab wounds and his left hand was severed and thrown into a nearby field.

Out of the twelve persons arrested — eight for their direct involvement and four others for conspiracy and harbouring the accused –  the first accused Manikuttan is a history-sheeter involved in a dozen criminal cases and four others are active members of the CPM’s youth wing, DYFI.

The ruling CPI(M) and RSS-BJP on Tuesday held another round of talks to end the violence which has peaked in the state after the CPM’s victory in the 2016 assembly elections.

CM Pinari Vijayan, who also holds the home portfolio, has time and again blamed RSS and BJP for the post-election violence witnessed in Kerala over the last 14 months:

But with mounting evidence of CPM complicity in the murderous attacks on RSS/BJP activists and increasing criticism of Kerala police, Vijayan is feeling the heat. Even CPM veteran and ex-CM  V S Achuthanandan criticized Vijayan over the state police’s brutal handling of peaceful protesters and activists such as Jishnu Pranoy’s mother Mahija.

Kerala High Court too has rapped state police on multiple occasions, including for inability to control violence that occurred against educational institutions and staff during recent ‘student protests’, or for backing an accused in a sexual harassment case.

Students Federation of India (SFI), student wing of ruling CPM has unleashed a reign of terror on college campuses across the state ever since Vijayan took charge. Some recent incidents of SFI hooliganism:

SFI clean sweeps elections in all the state-run universities and opponents say they do it through silencing dissenting voices and preventing others from even filing their nominations if they stand a chance to win. SFI and CPM is equally brutal on ex-cadre who become disillusioned and leave the party – when an SFI leader at Dhanuvachapuram dared to leave the party, SFI/CPM goons attacked him with rods.

The brazen pre-dawn attack on the BJP state office in Thiruvananthapuram last Friday when only 1 policeman out of 5 tried to stop the attackers shows how police has been thoroughly politicized. Soon after the CPM-led Left Democratic Front (LDF) coalition came to power last May, Kerala Director General of Police T P Senkumar was removed from the top police post citing inaction in a case of brutal rape and murder of a law student, Jisha, in Kochi last year.

Senkumar was known in police circles for his tough and no-nonsense approach, particularly in tackling political violence in Kannur, the north Kerala district notorious for violence that claimed lives of many Hindu activists in the last one year.

The police officer moved the Supreme Court accusing the state’s LDF government of victimising him for carrying out impartial investigation in political killings in Kannur. In his plea, Senkumar said the CPI (M) was annoyed with him as he took prompt action in many cases related to political murders, including that of T P Chandrasekharan, Shukoor and Kadirur Manoj. In Manoj and Shukoor murder cases police made CPI(M) district secretary P Jayarajan an accused. Both the cases are now being investigated by the Central Bureau of Investigation.

In a historic decision this April, the Supreme Court reinstated Senkumar after a 11-month-long legal battle and castigated the Kerala Government for removing the DGP unfairly and arbitrarily. However, Senkumar was at the helm for only a further two months as he retired on 30 June.

In the midst of all this, Kerala, especially the district of Malappuram, continues to be a hub of Islamist radicals with multiple Hindu parents fighting court cases to recover their children who have been converted to Islam after brainwashing in a controversial Salafist theological centre ‘Sathya Sarani’ with links to radical organization PFI.

Not just RSS/BJP, other CPM opponents on hit list as well

While national media has been at great pains to portray the violence in Kerala as a ‘cycle of violence’ between RSS/BJP and CPM, the truth is that CPM cadre have also been attacking other political opponents like Congress and IUML in the state – although with less ferocity than the Hindu activists whom the communists regard as sub-human. These facts were also brought out by MP Meenakshi Lekhi while speaking in Lok Sabha. National leaders of Congress have been silent over the barbarity unleashed by CPM in Kerala in order to prop up the ‘secular’ alliance against Modi.

There is enough evidence to suggest that all these murders are being carried out with the tacit backing of highest echelons of the CPM party apparatus in the state.

In 2014, Congress MLA A.P. Abdullakutty, who was earlier with CPM, had revealed that in 2008 then CPM State Secretary & now Kerala CM Pinarayi Vijayan had asked his party workers to follow the Bengal communist style of killings opponents – ‘bury their bodies in a deep pit along with a sack of salt. The world never comes to know about the blood, photographs or the news about such killings.

CPM’s state secretary Kodiyeri Balakrishnan has openly urged party workers to be ready to hit back at rivals.

Last year, an IUML worker was hacked to death after being acquitted by a trial court in the murder case of a CPM worker. Opposition leader Ramesh Chennithala (Congress) said the CPM had “executed the verdict of the party court”. “The issue is very serious. It was a barbaric act to kill a person who was acquitted by the court. Instead of the party court ordering to butcher acquitted persons, CPM should have taken legal steps,” Chennithala said.

He said the murder should be seen against the backdrop of Balakrishnan’s statement that the party would react to murders of its cadre promptly.

Clearly, the pressure is getting to Pinarayi Vijayan – he lost his cool at media before the “peace meeting” with RSS/BJP on Monday. “Get out, who invited you here,” he shouted at newsmen when he saw lens men taking the visuals of the meet.

State Governments in Bharat have been dismissed and President’s rule imposed for far less than the total breakdown of law & order that we are currently witnessing in Kerala under Pinarayi Vijayan. The ball is firmly in the court of the CPM leadership – Yechury, Karat and others; they can still salvage the situation by sacking Vijayan and appointing someone else in his place. An old hand like VS Achuthanandan might just be able to subdue the fanatics within CPM – he was the one who spoke out strongly against the 2012 murder of TP Chandrashekharan, a local leader who in 2009 had left the CPM to form a splinter communist party called Revolutionary Marxist Party (RMP).