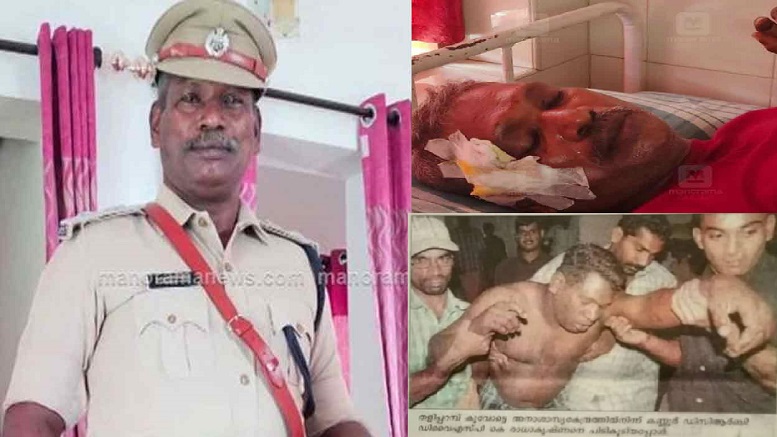 Former Kerala cadre IPS officer K Radhakrishnan, who has been pleading with the ruling leftists to either help him or kill him, has been injured in a road accident. He sustained injuries at Trippunithura in Ernakulam district but the police ruled out any foul play. In 2006, he was beaten up severely by CPM goons and the communist regime has not paid him salaries, dues, or retirement benefits.

The government treated the now-retired IPS officer, from a SC Hindu (aka Dalit) community, so badly that he was forced into hiding and was working as a security officer at a private company in Bengaluru, just to support his family. He had to return to Ernakulam when the accident happened right in front of his house injuring his spine and head.

His daughter, a research scholar has opted for part-time research as the family cannot afford hostel expenses and his postgraduate son had to drop his civil service coaching. To fight the false cases filed against him, Radhakrishnan sold his family property and the one that he built was auctioned by the bank since he could not repay the loans.

His troubles began when Radhakrishnan declined to tow the CPM diktats after he was entrusted the infamous Kannur Fazal murder investigation in 2006. The last time he met CM Pinarayi Vijayan was in August 2018 and he pleaded with the CM to revoke his suspension and settle his dues. Radhakrishnan told him that he and his family had no other option but to commit suicide.

Vijayan’s alleged response to proceed with that plan (of committing suicide) reduced him to tears and exposes the cruelty of the so-called socialists. Radhakrishnan’s life story is an insight into how communist dictators push their communal agenda, coerce victims, project their crimes onto other political parties, physically harm and conspire to plant false evidence.

Radhakrishnan says there are 3 types of CPM workers. Ordinary workers who vote for the CPM only, and the decent ones who work in some local establishments form the base, and both of them have party memberships. All have party support which is nothing fancy but often limited to food kits and most still live below the poverty line.

The third group is the goons with no memberships. They live together in secluded places and train in martial arts. They report to just one or two local CPM leaders and are used to unleash violent crimes. They are the ‘Action Group.’

Mohammed Fazal was hacked to death by members of the CPM ‘Action Group,’ towards the end of Ramadan month in 2006. The killers wore saffron clothes, left a trident at the crime scene and fled after the killing. This was intended to provoke the NDF/PFI by presenting an impression that the RSS was behind the murder.

Fazal was a former member of CPM, who switched and joined the Islamist outfit National Democratic Front (NDF). Fazal’s exit from the CPM created fear among the CPM leaders since they knew that more Muslims would follow him. They conspired and killed Fazal and tried to shift the blame on the RSS.

The case proved a classic example of CPM using its party goons to eliminate political opponents and then misusing civil servants and police to blame other political parties for their own crimes.

The investigation led by DySP Radhakrishnan

Having asked Radhakrishnan to investigate, the CPM leaders led by local ‘Action Group’ bigwig Karayi Rajan declared that RSS workers were behind the murder. The then Home Minister Kodiyeri Balakrishnan repeated the same and by evening loudspeaker announcements were heard all over Kannur, that the RSS was behind their political killing. By dusk, the NDF/PFI fell for the trick and agreed that it was an RSS murder.

Radhakrishnan has alleged that there was political pressure from then Home Minister (HM) Kodiyeri Balakrishnan to charge sheet RSS workers. Radhakrishnan summoned the ‘accused’ RSS workers Subeesh, Shino, Pramesh and Prabeesh but was unable to find an iota of evidence and let them go on the 4th day.

His investigation revealed the role of Kodi Suni a known history-sheeter and an active action group member and the conspiracy led by Karayi Rajan and Karayi Chandrasekaran (both were CPM local secretaries). The very same day he was relieved from the Fazal murder case and it was handed over to the crime branch.

2 months later, Radhakrishan who was on leave was recalled on December 14th, a Bharat Bandh day. He joined at Thalassery and having done his duties, left late into the night and stopped at a friend’s place for dinner. 60 action group members attacked him, his driver Ramachandran and his friend Rajesh.

That group led by Thaikandy Balakrishnan, the Vice Chairman of Taliparamba Municipality alleged immoral activities and beat them even after they had fallen unconscious. A lady named Sosamma Chacko was also planted for credibility. The CPM regime suspended Radhakrishnan, even as he was in the hospital.

15 days later, Rajesh died while his driver succumbed within a year and Radhakrishnan spent a year-and-a-half in therapy. His nose was shattered, his spine was broken and he still needs a belt to support his back. The Thalassery police station was just one km away but police reached the spot after 2 hours.

Radhakrishnan took the case to the high court and 2 years later they summoned Sosamma 4 times but she failed to appear. The High Court dismissed the immoral trafficking case filed against Radhakrishnan and observed that the case was nothing but political vendetta with the intention of maligning a dutiful officer.

The court admonished the department for framing him and ordered the government to reinstate him immediately. The government went to the Supreme Court but the high court order was upheld. Even then they went slow and when threatened with contempt of court, appointed him the assistant commissioner of police in the Kozhikode narcotics cell.

Though the law stipulates that officers in the state service who are eligible for a promotion to the central service can be reappointed before any action is taken against them, the state froze his appointment. Both the state and the central administrative tribunals ordered his appointment, but the government approached the high court and the court upheld the regime’s claim.

“I was not given an opportunity to present my case nor have I received my salaries or other perks for a year and a half. The central administrative tribunal has ruled that I am still in the IPS and my service ends only in 2021”, he lamented. This was back in 2018 and even today his dues remain unpaid.

The mainstream media’s attention is firmly fixed on Delhi and Yogi Adityanath ruled UP, while fascist regimes like the ones in Opposition-ruled Kerala, West Bengal, AP, Maharashtra and TN are allowed to go scot free. CPM leaders in Delhi give bytes to news channels pretending to be be ‘protectors of democracy and free speech’, while their colleagues at the state level enforce their writ through murderous, vendetta politics.

How safe is Thiruvananthapuram?