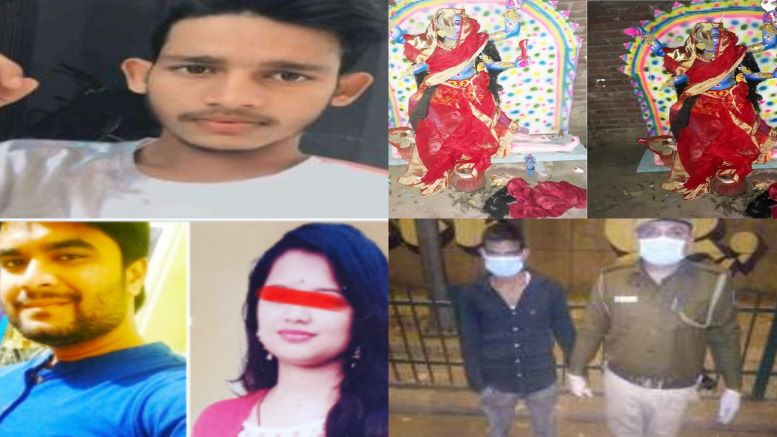 In this weekly summary for the period from 13 December to 19 2020, we hope to provide a snapshot of such crimes and hopefully awaken more people around the world to this human rights crisis:

1) A case of grooming came to light from Mewat where 18-year-old Muslim youth, Shoyab Khan from Mewat pretended to be SK Sinha to trap a minor girl. Khan was arrested for kidnapping a minor girl (15) and forcing her into marriage in New Delhi. After the girl’s father filed a complaint at Rajouri Garden police station, police traced Khan to his native village in Mewat where he and his family were found absconding. He was finally arrested from Badarpur and has been sent to judicial custody.

2) A 16-year-old Hindu youth Anshu alias Lucky King was allegedly murdered using a butcher’s knife by the brother of the Muslim girl he was in love with. As per reports, the incident occurred on Saturday night at Sandalgaon which falls in the Bahadurpur Station jurisdiction of Bihar’s Patna. The murder came to light when the fish seller alerted the family and informed them that Anshu’s body with the throat slit open was lying in the Azimabad lane.

3) A new case of grooming has come to light from Odisha’s Dharamshala where a Hindu girl was kidnapped by Muslim youth. The life of the girl is said to be in grave danger and available information indicates that the father (Abdul Hamid Khan) of the groomer Abdul Sahamat Khan has been arrested and remanded to 14 days of police custody by the JMFC for issuing threats to the family of the Hindu girl. Latest reports suggest that the police have managed to rescue the girl and have also arrested the main accused.

4) Police in Bulandshahr, UP had a narrow escape when a group of 6 cow smugglers opened fire at them in the early morning hours on Tuesday. 3 accused – Fariyad, Jabbar, Kamruddin – have been arrested while 3 others managed to flee under cover of darkness. A police team led by ASI Anil Kumar was on patrol at night when they got information about a cow being slaughtered in a mango orchard. Police reached the spot where the accused opened firing with an intent to kill. Police had a narrow escape and managed to catch 3 of the men after cordoning off the area.

1) The neighboring Islamic nations continue to be a hell-hole for Hindus who continue to face persecution. Reports have emerged of three Hindu shopkeepers having been shot at in Pakistan’s Sindh. The three have been injured in shooting by a Muslim gang who were allegedly trying to grab their property in Aisha market, Umerkot, Pakistan. A case has been lodged against 5 accused and local shopkeepers and businessmen are protesting in front of the city police station in Umerkot, Sindh demanding the shooters’ arrest and protection for themselves.

2) Muslims lead by Muhammad Aslam, attacked the homes of Hindus belonging to the Bheel community, tortured, looted, and forced them to leave their properties in Pungaryo, Badin, Sindh-Pakistan. They are so scared to go back & submitted a request for protection to Session Judge & SSP police Badin.

3) 22 Hindu families were converted to Islam in village domori, Jati, District Thatta, Sindh-Pakistan. There is either direct or indirect pressure on Hindus in the neighboring Islamic nations to embrace the majority religion. In Corona lockdown Non-Muslims were denied rations given by NGOs & the government. They were humiliated, beaten & asked to convert to Islam to get food & respect. CEO of an NGO tells how they work with an Islamic Claric to convert 22 Hindu Families to Islam in Jati, Thatta, Sindh-Pakistan.

4) As hangings of Hindus in Pakistan were known widely on social media. Culprits find another way of Genocide, killing now on roads to make it look like accidents. It is now a daily occurrence, sometimes all family members smashed under a truck. Dolt Kohli killed in Umarkot.

5) Muslim beat a Hindu youth in Umarkot Sindh-Pakistan on Friday, a day after Hindu shops were attacked in the same area in which 3 Hindu Businessmen got injured due to gunshots and were admitted to the hospital. The situation is getting worse as Muslims demanding Hindus to leave their properties and town.

2) Lakingme Chakma was a 14-years-old student of class-VI when she was abducted from her home on January 5. After 11 months, police called in her father last Thursday to identify his daughter’s body in Cox’s Bazar hospital morgue. They, however, did not hand him over her body saying the girl was ‘married’ to one of her abductors who managed a birth certificate that says she was 18. Attempts were being made to bury the girl as per Islamic customs.