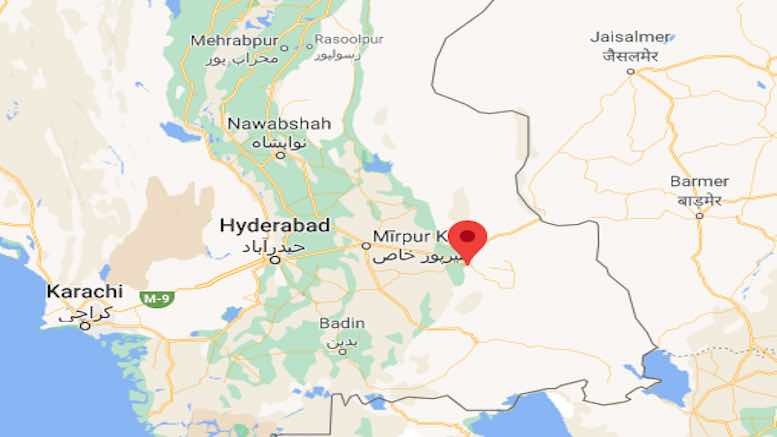 Three Hindu shopkeepers have been injured in shooting by a Muslim gang who were allegedly trying to grab their property in Aisha market, Umerkot, Pakistan. A case has been lodged against 5 accused and local shopkeepers and businessmen are protesting in front of the city police station in Umerkot, Sindh demanding the shooters’ arrest and protection for themselves.

Pakistani human rights activist Rahat Austin shared the news via a news clip. The injured shopkeepers are Raja Mali, Anand Mali and Ashok Mali, while the names of the accused are given as Imtiaz Mehr, Nasser Mehr, Qayyum Mehr, Sher Mohammed Mehr and Sultan Mehr.

Properties of Non-Muslims are considered as booty by majority of Pakistanis so they try to snatch it one way or another. A gang of Muslim neighborhood attacked, 3 Hindu businessmen Raja Malhi, Anand & Ashok Mali get gun shots in Aisha Market, Umerkot,Sindh-Pakistan on refusal. pic.twitter.com/gWkZvYHtMY

The anchor adds that the shooters wanted to kill the shopkeepers to create an environment of terror. Protesting shopkeepers are demanding immediate arrest of the accused, as Pakistani police is known for its apathy in such attacks on the country’s minority Hindus.

Killings and loot of Hindu community is commonplace in Pakistan. From poor tribal Hindus to more prosperous businessmen and traders – no one is spared. The abduction, rape, forced conversion and marriage of minor Hindu and Christian girls is a national pastime, with many such girls later ending up dead or sold into prostitution.

The Pakistani government and institutions like police and judiciary condone such crimes or remain silent spectators. Few within the establishment who dare to speak up are shot dead like Federal Minister for Minorities Affairs Shahbaz Bhatti. However, Western governments, media and ‘human-rights’ bodies remain oblivious to these acts. They issue token censures against Pakistan, but always manage to monkey-balance any criticism by talking about India’s “Hindu fascism” problem.

Islamist groups with links to Pakistan have managed to garner significant clout in Western societies and infiltrate the left-of-centre political formations like Democrats in US and Labour in UK. This has further emboldened the Pakistani State and Army to persecute non-Muslims as they please.

Despite knowing very well the anti-Hindu bigotry that fuels the very idea of Pakistan, mainstream ‘secular’ parties in Bharat too are soft on this Islamofascist state, preferring ‘uninterruptible dialogue’ instead of committing to a bipartisan national policy aimed at neutralising the mullah-military nexus of Pakistan using whatever means necessary.