Another daughter (14) falls victim to a jihadi rakshasa in Dumka, Jharkhand 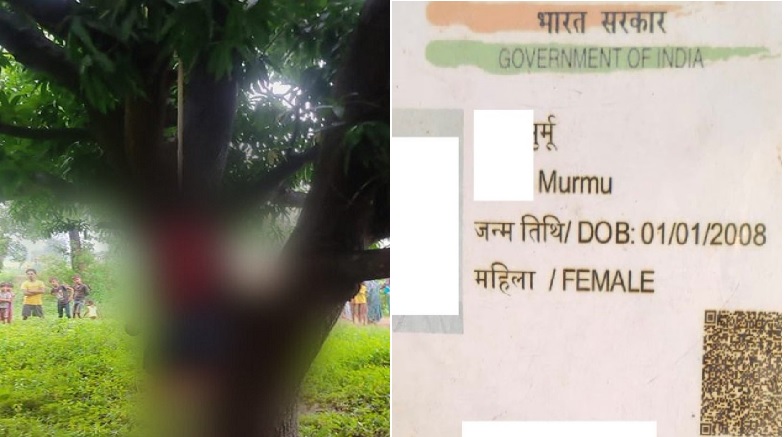 A girl, 14, was found hanging from a tree in Jharkhand’s Dumka early Friday morning. She was raped and murdered by Arman Ansari, a construction worker, who has been arrested.

It is believed that the grooming jihad had been exploiting the child, who belongs to a poor vanvasi (‘tribal’) family, for months. When she got pregnant, Ansari first murdered her and then hung her from a tree to make it look like suicide. Villagers have alleged that the local police daroga (ASI) is hand-in-glove with such criminals.

The police are waiting for the autopsy report to ascertain whether she was killed first and hanged from the tree to stage a suicide. The accused Ansari is a mason from Amrapara, Pakur district. The girl also used to work as a laborer to support her family, and this is how she came in contact with the grooming jihadi.

Arman Ansari has been charged under IPC sections 376 (rape), 302 (murder) and provisions of the SC/ST Act and POCSO Act, Superintendent of Police Ambar Lakra told PTI.

It is notable that Dumka and Pakur districts of Jharkhand are right on the West Bengal border & under 100 km from Bangladesh. Local vanvasi groups have been complaining for long that Islamist outfits like PFI are using grooming jihad to trap vanvasi girls for marriage and to acquire their land. Pakur is a known PFI stronghold.

Tweeting about the incident, the Leader of Opposition in Jharkhand assembly, Babulal Marandi, said: “This news from Dumka is going to boil your blood. It is alleged that this tribal girl was hanged on a tree after being raped by a youth named Arman Ansari yesterday. Arman is arrested. And how many tribal girls will be the victims of such scoundrels in Jharkhand?”

In a follow-up tweet, Babulal Marandi shared the date of birth of the victim and wrote: “According to the information received, this santhal tribal girl was just 14 years old, a victim of Armaan’s jihadi desires. possibility of this matter being linked to the international network of love jihad also cannot be ruled out.”

While it is true that there are Muslim dawah groups and networks of maulanas and socio-political Islamist leaders who incite and incentivize Muslim youth to target non-Muslim girls for sexual exploitation and/or conversion and marriage, most grooming/love jihadis don’t need formal indoctrination and act of their own accord.

The idea of kafir girls being ‘immoral’ or legitimate targets for conversion into the ‘only true religion of Islam’ has become so widespread in Muslim society that grooming jihad has become normalised to a large extent. Having sexual relations with non-Muslim girls and converting them is also believed to result in spiritual rewards equivalent to going on Haj (Muslim pilgrimage to Mecca).

Many Hindu leaders talk of ‘love jihad networks’ as the Dharmic mind cannot fathom such a vast number of young men acting in such a barbaric manner of their own volition, so we assume that someone is pulling the strings from behind. And since the secular state has never been able to ‘prove’ the existence of a nation-wide network promoting love jihad, the Hinduphobic left-liberal cabal use this as ‘clinching evidence’ to claim that Love Jihad is an ‘Islamophobic Hindutva conspiracy’.

For the record, when Supreme Court asked NIA to probe the Akhila/Hadiya conversion case in 2017, their initial findings were “there is a pattern to convert Hindu girls and get them married to Muslim men…a well-oiled machinery working in Kerala was indoctrinating and radicalising society in the state”. However, this finding was ignored by DY Chandrachud and other SC judges and the conversion was deemed ‘genuine’.

In 2018, NIA, which had been given 11 ‘inter-faith’ cases cherrypicked by Kerala Police to probe, ended their investigation stating they didn’t find any “prosecutable evidence to bring formal charges under any of the scheduled offences of the NIA”. NIA added the disclaimer that the results of this investigation should not be construed as a clean chit for PFI. Yet, media went to town with this news, with misleading headlines like “NIA ends Kerala probe, says there’s love but no jihad”.

The bottom-line is this – whether promoted through formal organizations like PFI or Maulana Kaleem Siddiqui’s Jamia Imam Waliullah Trust, or promoted by local maulanas and leaders, or just carried out by lone-wolf grooming jihadis – Love Jihad aka Grooming Jihad is a reality. And whatever proof we show, the Hinduphobic left-liberal HINOs (Hindu in Name Only) are never going to be convinced.

There are Muslims who themselves understand the poison that has become mainstreamed in their societies – Hindus will be better off collaborating with such people, than trying to break their heads in convincing HINO elites.

When SC/ST cease to matter

One of the foundational principles of our secular state is that it alone stands for the rights of the under-privileged SC/ST section of society. This class has been “oppressed for 1000s of years by upper castes” is an abiding myth manufactured by erstwhile colonial rulers, and carried forward by the brown sahibs who inherited the ruling class mantle in 1947.

So whenever there is any crime against an SC/ST, the entire establishment intelligentsia raises their voice in unison. But with one caveat. If the perpetrator is a Muslim or other ‘minority’ (like a Church pastor), as is increasingly the case in crimes against SC/ST, or if an SC/ST person carries out a crime against OBC/GC (general category) community, the Anglicized elites fall silent.

Hemant Soren is himself a vanvasi and leads a party JMM that claims to stand up for vanvasi rights. He has been at the forefront of attempts to have Sarna Dharma listed as a separate religion, claiming in collaboration with US-promoted ‘Dalit’ scholar that vanvasis have “nothing in common with Hindus”. However, his party and coalition government is dependent on Muslim votebank, so like all other purveyors of secular politics in our country, he turns a blind eye to crimes by Islamists.

Babulal Marandi visited the poor Santhal family of the victim –

Babulal Marandi also expressed shock that the same SDPO Noor Mustafa Ansari, who had tried to protect accused Shahrukh in the Ankita murder case and was removed from the case (some reports say he has been suspended), could possibly investigate this case too.

The National Commission for Protection of Child Rights (NCPCR) chairperson Priyank Kanoongo is also headed to Dumka to meet authorities about this and other recent cases of crimes against minors.

“We have asked the administration to investigate the case thoroughly. If not, the probe should be handed over to the CBI or the NIA. We will go from village to village to form a women’s organization if justice is not done. We will protect our women,” another BJP leader Louis Marandi told India Today TV.

The incident comes days after Class 12 student Ankita Singh (15) was set ablaze allegedly by her stalker, Shahrukh, in the very same Dumka, leading to massive protests in the state. On August 28, another minor vanvasi girl was raped inside her home in Ranchi by a Muslim man, Shaharuddin Ansari (26). In Lohardaga district, a married Muslim man Rabbani Ansari assumed a fake vanvasi identity of Sajan Oraon to groom a minor vanvasi girl, sexually abuse her and once she found out, he tried to kill her by pushing her into a well and throwing stones on her.

Meanwhile, Jharkhand CM Hemant Soren, who is embroiled in an illegal mining scam apart from facing potential disqualification due to an office of profit case, casually dismissed the string of horrific crimes in his state with a “incidents keep happening…no one can stop an incident beforehand” comment.