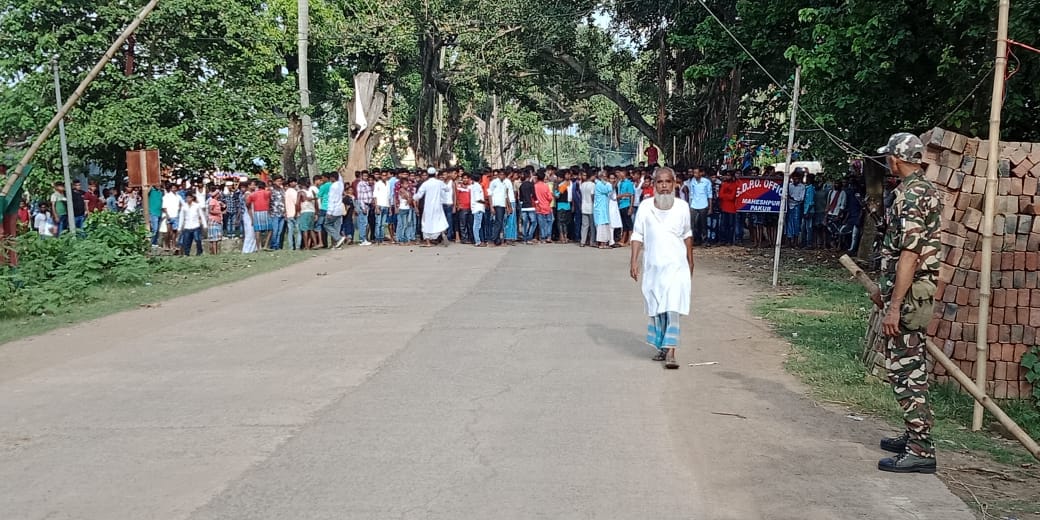 A 1000 strong mob of extremist Muslims chanting pro-Pakistan slogans attacked a police contingent and tried to desecrate a temple in Jharkhand’s Pakur district on the day of Bakrid, news portal MyNation has reported.

The clash originated when a police team went to stop the slaughtering of cows for Bakrid on the campus of a primary school in Dangapada village. The police team came under violent attack and retreated fearing for their lives. Soon, several mosques from nearby villages started broadcasting inflammatory messages over loudspeakers asking people to gather at the Maheshpur police station to avenge the police action.

Hundreds of miscreants from the side of Muraroi in Bengal also joined in and besieged the SDPO (sub-divisional police officer) office showing Pakistani flags and shouting ‘Pakistan Zindabad’. Maulvis also called for a repeat of the 2016 Kaliachak mob attack on a police station in West Bengal.

Soon, members of Hindu organizations too gathered in Maheshpur market and started demanding the arrest of the attackers. Seeing the situation deteriorate, police & administration declared and announced the imposition of Section 144 (prohibition of unlawful assembly). The Muslim mob paid no heed and continued to assemble. People from Hindu organizations however dispersed to their homes.

“The mob attacked the office with stones and started firing bullets on the office. They also hurled bombs. Many officials, including the DC, were injured,” said Block Development Officer (BDO) Bhola Mandal.

The mob also attacked a Hindu temple in the vicinity of the SDPO office and tried to desecrate it. The police was forced to open fire on the attackers after even tear gas failed to deter them. It is said that police fired almost 250 rounds. One rioter, Ali Husssain, was shot in both his legs and was found clinging to a country-made pistol and many live cartridges. The police also seized 10 motorbikes from the spot.

Of the rioters, 10 were chased and arrested, 45 identified apart from the 950 unidentified so far.

It is notable that Pakur district of Jharkhand, which is right on the West Bengal border & under 100 km from Bangladesh, is a hub of Islamist activity. The radical Islamist organization PFI (Popular Front of India) which is banned in Jharkhand, continues to be active in Pakur district. It was recently reported in regional media that PFI members had married over 1000 tribal girls in the area in order to gain control over tribal people’s land and minds.