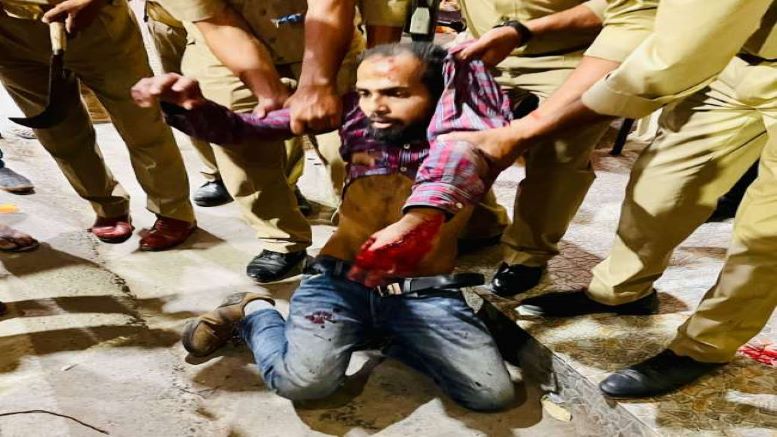 A person identified as Ahmed Murtaza Abbasi attacked Provincial Armed Constabulary (PAC) jawans guarding Gorakhnath Mandir late Sunday evening. The jawans are reported to have sustained serious injuries in the attack and Abbasi has been arrested. The injured have been admitted to the Gorakshnath Hospital.

The UP government has taken cognizance of the matter and ordered tightening of the temple’s security in addition to giving directions for a detailed probe. Both the Additional Chief Secretary and Director-General of Police (DGP) also took a detailed look into the matter.

The machete-wielding accused attempted to enter the temple when he was caught by one of the guards. The security staff also recovered a bag near the main entrance. The bag contained a sharp weapon, pen drive, airlines ticket and laptop. A PAN card in the name of Ahmed Murtaza Abbasi has also been recovered.

Fortunately, CM Yogi Adityanath wasn’t present on the temple premises at the time of the attack. The security of the temple has been increased and are conducting further investigations into the matter. Police are also questioning Abbasi to gather more information. Though the accused has claimed that he is a resident of Gorakhpur, the police are investigating whether his claims are true and also, trying to find out the motive behind attacking the temple.

The main entrance is situated right opposite the Gorakhnnath police station. Gopal Goud and Anil Paswan were posted on duty. Reports state that around 7.15 PM when they stopped the youth for checking before allowing him entry, he became aggressive. At first, he tried to snatch the weapons of the jawans but when he failed to do so, he launched an attack with his machete.

Eyewitnesses say that Abbasi struck quick blows with his weapon on the legs and other parts of the jawans even before the latter could react. He proceeded towards the main entrance even as the bloodied jawans slumped to the floor. Eyewitnesses also said that he was shouting “Allah-hu-Akbar” all the while.

Constable Anurag Rajput and LIU’s Anil then tried to stop Abbasi but he attempted to injure them with his weapon and then proceeded towards the temple. However, before the accused could enter the temple he was overpowered by constable Anurag Rajput near the first barricade. Rajput struck a blow with his stick on the accused’s hand causing the latter to drop his weapon.

As news of the attack spread, locals gathered at the spot and beat up Abbasi. The injured accused was then admitted to the Zilla Hospital for treatment. As per available information, the accused was accompanied by another person who fled the spot after Rajput overpowered Abbasi.

Even though Abbasi claimed that he took the step because he was stressed due to various problems in his life and wanted to be ‘shot dead’, it is quite difficult to take his claims at face value and this could well be his ploy to escape punishment after having been caught. English language mainstream media, of course, tried its best to cover up for the accused.

On receiving the information, DIG J. Ravindra and SSP Dr Vipin Tada visited the Gorakhnath temple and inquired about the incident. Following their inquiry, the security of Gorakhnath temple was increased. The DIG also appreciated constable Anurag Rajput who nabbed the attacker.

The Gorakhnath Mandir is a sensitive area as far as security is concerned. It must also be noted that CM Yogi Adityanath’s residence is located inside the premises due to which the security set up here is very strict. Police and PAC are engaged in the external and internal security of the temple premises. Additionally, senior officers also regularly supervise the security arrangements. The security breach despite such strict security is certainly a matter of concern.

It has also come to light that Abbasi is a chemical engineer from IIT Mumbai which once again belies ‘illiteracy is the root cause of fundamentalism’ theory of the secular-liberal cabal in an attempt to give a clean chit to Islamists and whitewash their crimes. It is worth mentioning that Sharjeel Imam too is an IIT Bombay product, and those who joined IS were also engineering students and other professionals.

HinduPost had brought to light how jihadi ideology trumps both education and de-radicalization. The so-called educated falling into the radicalization trap indicates a deeper malaise. Journalism student Pune’s Yerwada resident Sadiya Anwar Shaikh aspired to be a suicide bomber and kept going back to the terrorist outfit IS (Islamic State) even after she was de-radicalized twice by Bharat’s intelligence agencies.

Similarly, two radicalized Islamists arrested from Bengaluru by the NIA were both educated and well-to-do contrary to popular opinion that it is the poor and illiterate who are attracted to the jihadi ideology. As we have stated earlier, it is not poverty or lack of education but the increased radicalization and indoctrination that is the main reason behind Islamic terrorism. Even dreaded terrorist Osama Bin Laden was supposedly an engineer. The real problem is the iron-grip that Maulvis, Imams, and Maulanas have over the Islamic community as a whole.