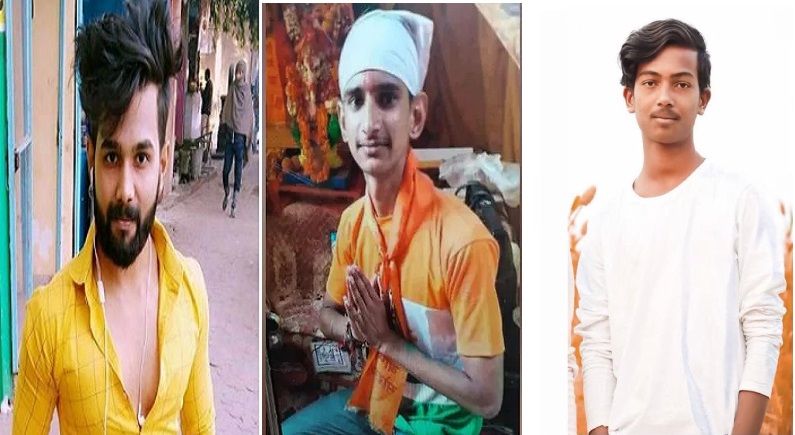 The problem faced by Hindu victims of communal hate crimes in Bharat, is that our English-language media and international press (Western, Pakistani and Arab media) highlight a few cases of violence against Muslims, but intentionally ignore multiple and frequent cases of violence against Hindus. Some Indian Muslims with verified  Twitter accounts such as Rana Ayyub, Hindu-hating ‘liberals’ like Ashok Swain, and Western propagandists like CJ Werleman amplify this skewed narrative.

Most Hindu boys listed here are normal citizens – none of them trapped, blackmailed or harmed their Muslim girlfriend, like those grooming jihadis (love jihadis) who harm/kill Hindu girls. These couples are the true inter-faith relationship, as Hindu men never put any pressure on Muslim girls to convert.

One of the first murders in which Pasha was allegedly a central figure was that of Shashikumar, a Bajrang Dal member who owned a hairdresser’s salon in Mysuru and was in an alleged relationship with a Muslim girl. A gang hacked him to death in the salon on July 12, 2008. The then BJP government ordered a CID probe but the case remained unsolved until Pasha’s arrest.

On May 21, 2010, the gang allegedly murdered a milkman in Pasha’s hometown of Hunsur, just outside Mysuru, over an alleged affair with a Muslim woman.

Swarajyamag reported that the accused came from Bihar.

Case 8– Agra, UP – Muslim girl’s 3 brothers kill her and her Hindu boyfriend

Case 12– Hapur, UP – Dalit Hindu boy and his Muslim wife killed by Muslim girl’s brothers for marrying outside religion.

Case 14 – Hindu OBC man and his pregnant Muslim wife was killed by her cousin for converting to Hindu Dharma.

As Priya woke up, he attacked her throat with the knife. She evaded the first attack. However, later he stabbed her multiple times on the stomach, killing her and the unborn child,” Dumbare said.

They drank till late in the night, said investigating officer Nitin Thakre. “Afterwards the couple went to sleep. Around 12.30am, Monday, Shafiq killed Vijay. Sufiya woke up and seeing blood started screaming. Shafiq stabbed her so brutally that the unborn child’s legs came out of her abdomen.”

Shafiq used the knife he had acquired earlier in the day and slit Vijay’s throat. When his cousin woke up, he went ahead and stabbed her in the stomach, saying, “Tu hamare liye tab hi mar gayi thi jab tune isse shaadi ki. Ye bacha humein nahi chahiye. (You died for us the day you married him. We don’t want this child of yours)”.

Case 15– Kerala – Hindu Congress worker killed by Muslims for for marrying Muslim woman. In Kerala state, every year hundreds of Hindu & Christian girls are converted to Islam. But a secular Congress leader couldn’t save himself from ‘peaceful’ Muslims-

There are two versions about his ‘immolation.’ The police authorities and some locals near the accident site said that he had poured kerosene over himself and set himself ablaze after his attempt to convince his lover’s relatives turned futile. However, Jeethu Mohan told the First Class Magistrate in his dying statement that his lover’s relatives, including a policeman at the Kodungallur AR camp, poured kerosene on him and set him afire in the courtyard of the cop’s house after a conciliatory effort turned futile.

Case 18– Bihar – A Muslim girl was killed as she loved a Hindu man. The accused duo, residents of Bihar’s Jamalpur, were arrested from Kolkata.

Case 19– Uttar Pradesh- A 20-year-old Muslim woman survived a murder attempt when her brother allegedly shot at her for her affair with a Hindu man.

Case 20– A Bihari Muslim girl was tied to a tree and thrashed for having an affair with a Hindu man.

Bihar seems to be the most dangerous state for Hindus boys who love Muslim girls, even more than UP, West Bengal, Kerala, Delhi and Jammu & Kashmir

Case 21– Delhi – Ankit Saxena’s murder by his Muslim girlfriend’s family was one case that generated some coverage in liberal media, maybe because Ankit Saxena used to wear a skullcap and his father held Iftar parties.

Case 22– 2008 Murshidabad, WB beheading- A Hindu man who married a Muslim girl was beheaded after a kangaroo court ordered his ‘execution’ at a village in Murshidabad district of West Bengal.

The man, Shailendra Prasad, was from Bihar and worked in Mumbai. The girl, Munira Bibi, worked as a maidservant in Mumbai, where she met Shailendra and fell in love. They got married in 2006, had a child and were generally happy. Problems arose when Munira visited her parents in Murshidabad. Sensing trouble, Munira advised her husband to hide his religious identity and sport a Muslim name. Shailendra became Munna Sheikh. But his father-in-law, Ansari Sheikh, noticed that he did not offer his Friday prayers, nor responded spontaneously to greetings.

The matter was promptly reported to the village committee. The next day, a salishi sabha (kangaroo court) was convened. Twenty-two political and religious leaders, along with Munira’s father, held Shailendra guilty and decided to summarily execute him. Shailendra’s beheaded body was found in a jute field later. Nobody dared to complain.

Those Bengali intellectuals who took part in the campaign for Rizwanur Rehman (allegedly killed by influential business family of his Hindu wife) in Kolkata remained silent here.

Case 24– Rajasthan – Khetram Bhil, a Dalit man was beaten to death for having an affair with a Muslim woman

Case 25– Hyderabad- Inter-religious couple attacked. According to police, the couple that hailed from Yellendu in Bhadradi Kothagudem district solemnised their love by getting married in a temple in neighbouring Mahabubabad district on Friday against their families’ wishes. Shaheen’s family objected to the marriage on religious considerations.

Case 27– Faridabad, Haryana- Sanjay, a Dalit Hindu man was murdered by the family of the Muslim woman he married.-

Case 30-Guntur, AP lynching – A Hindu boy was beaten to death by a Muslim mob, when he was wrongly accused of murdering his Muslim lover. The Muslim girl had committed suicide.

Case 33– Karanataka – K Lakshmipathy was murdered by the family members of his Muslim wife.

This is a partial list and also does not include cases where the couples faced threats, opposition, had to relocate etc. There are cases of Christian boy-Muslim girl relations being opposed too by radical Islamists, such as this case from Kerala where a Muslim family was threatened after their daughter Jaseela married a Christian boy.

The world should see how there is far more violence on Hindus by the ‘minority’ Muslims of Bharat when it comes to Hindu-Muslim marriages.