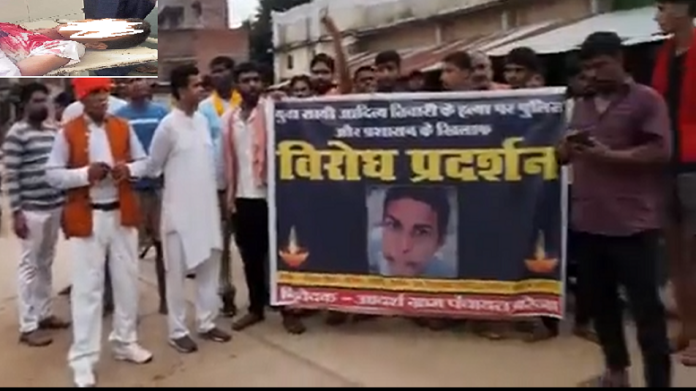 Class 10 school student 15-year-old Aditya Tiwari was brutally murdered after being fatally injured when three boys stabbed him in front of the school. The incident reportedly took place on Tuesday (September 20) in Bihar’s Jalalpur. Aditya is said to have been killed over an ‘affair’ with a girl student in his coaching centre in Bhatkesari. However, as per some reports, he was murdered as he had opposed some youths who were sexually harassing a girl.

Aditya Tiwari had gotten into a fight with the youths at the coaching centre. After this, he went to his school for the exam where he was confronted by the attackers. Three boys, two of them minors, belonging to the Muslim community have been identified as the main culprits in the case.

The attack occurred when the second term exams were ongoing. Aditya was spotted by some students who informed the teachers. He was immediately taken to the community hospital where the doctors declared Aditya brought dead. The students and teachers reportedly fled from the school following the incident.

The police arrested the two minors who revealed the motive of the murder. The arrested accused have been kept in the Kopa police station for further probe. The third accused identified as Taif alias Sonu Khan, who is the main conspirator, is absconding. Jalalpur police have confirmed that they are conducting raids to apprehend Taif Khan. “Aaj Jalalpur me Khela hoi”, Khan had posted on his Instagram story. The owners of the coaching centre are also being interrogated by the police to acquire information on the matter.

Following the incident, both the coaching centre and school are closed. The knife used in the murder has been recovered by the Jalalpur police from a field on the side of the road in Enamipur village. The accused had discarded the knife after the murder.

Tension prevailed in the area and even the school was vandalized by locals who were angered by the incident. The benches and desks were broken and the LED of the school was also damaged in the attack informed Headmaster-in-charge Prabhatesh Pandey. The teachers have demanded security from the District Education Officer (DEO). The police have registered a case against unknown people based on Pandey’s complaint.

“Aditya Tiwari of Bihar was only 15 years old when he was murdered in his school by Taif, Shahid, and Arshad, three barbarians who used to sexually harass schoolgirls every day. Aditya had shown bravery and fought them!! #JusticeForAditya” tweeted UP BJP MLA Shalabh Mani Tripathi.

It is extremely unfortunate that cases like that of Aditya Tiwari go unnoticed only because the victim is a Hindu male. The media ‘serves justice’ to cases based on its political agenda. Aditya’s identity – i.e. jati (caste) and religion – and that of his killers has put his brutal murder beyond the media’s scope of discussion.