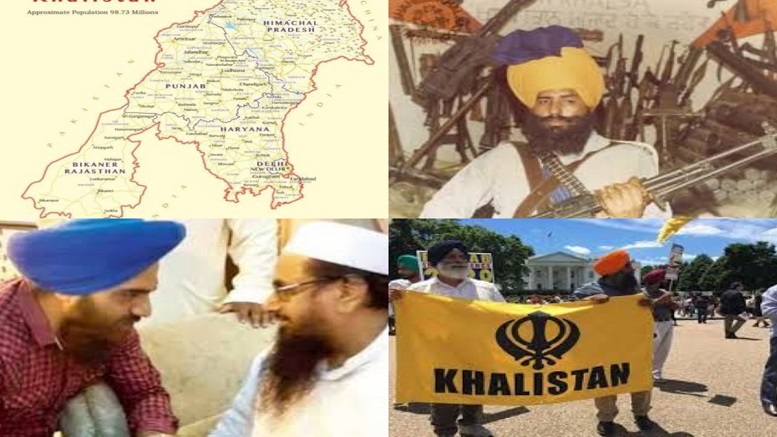 A research paper by a Canadian think tank has exposed the relations of Pakistan with the separatists batting for “Khalistan”. This paper comes at an opportune moment as the banned group Sikhs for Justice has declared its intent to conduct an illegal referendum in Punjab in November, 2020. This group, based in USA, has recently declared that it will block train movements in Punjab on 13th of September in the run up to its “referendum.”

The Macdonald-Laurier Institute or MLI is a public policy think-tank in Canada and is non-partisan in nature. The paper has been authored by Terry Milewski, who has extensive experience of covering Bharat and has been visiting Bharat since 1967. He has extensive experience in journalism and had covered the Air India bombing case including its trial in Bharat and its inquiry in Canada. The paper can be downloaded in original from here.

The paper questions the martyrs of Khalistan movement. It takes the example of Talwinder Singh Parmar, who had been killed in an encounter with Bharatiya security forces in October, 1992. He is considered a martyr for Khalistan with his photos adorning the walls of many Gurudwaras in Canada.

The truth is that Parmar was wanted for murder in Bharat, when we escaped to Canada. In Canada, he was instrumental in planting bombs on two Air India flights. One of them AI 182 from Montreal to Heathrow was destroyed mid air with 329 lives lost! The other bomb killed 2 baggage handlers in Japan. It was the deadliest attack using planes in history before 9/11 and is Canada’s worst mass murder till date. To further his aims, Parmar had founded Babbar Khalsa, a terrorist organisation.

Of the six killed in that encounter, 2 were from Pakistani ISI. Rocket launcher, machine gun, AK 47s, grenedes and other ammunition was recovered from the dead bodies and the vehicle they were travelling in. Yet, Khalistanis take the line that Parmar was a shaheed and even blame Bharatiya agencies for the bombing!

Khalistan movement was the brainchild of Zulfikar Ali Bhutto, who in 1973 told a group of reporters that ” Pakistan would tear off a piece of India – Khalistan – to avenge the loss of the 1971 war with India“. Under General Zia-ul-Haq, this mission gained more urgency as well as multiple dimensions.

According to Hussein Haqqani, former Ambassador of Pakistan to USA and currently working with a US think tank, Pakistan’s motives in this whole business were threefold:-

According to Haqqani, over time, Pakistan realized that the creating Khalistan is impossible as it has far less support in Punjab and Bharat is a strong state. It however keeps fanning Khalistan issue because the original motive of “bleeding” Bharat and inflicting pain on it is still possible.

The paper talks about the current leaders of Khalistan movement and their links with Pakistan. There are people like Gopal Singh Chawla, who lives in Pakistan and considers Hafiz Saeed as “ideal person”, but many are those who live in countries like USA, UK and most importantly Canada. These deny links with Pakistan and terrorism, but the evidence says otherwise.

In 2006, Khalid Awan, a Muslim of Pakistani descent, was convicted by a federal jury in New York (US Attorney’s Office 2006) of giving aid to the Khalistan Commando Force, a dreaded terrorist organisation. He was sentenced to 14 years in prison. Clearly, Pakistan does assist Khalistanis on American continent.

Many prominent Khalistanis like Satinderpal singh Gill lived for years in Pakistan as officials of banned terrorist organisations. Many like Bhagat Singh Brar and Parvkar Singh Dulai of Canada have been put on a no fly list by govt of Canada after the “Canadian Security Intelligence Service (CSIS) accused them of aiding Khalistani terrorist activities in India”. These activities were planned by ISI and these people have been found to be “linked to and co-operating with the Pak ISI” People like Dulai have also been found publicly supporting Babbar Khalsa by wearing their jackets etc.

Another leader is Gurpatwant Singh Pannun, who spearhead the Sikhs for Justice organisation. He has many a times expressed solidarity with Pakistan, despite atrocities on Sikhs in that country. He is on record saying “if India ever attacked Pakistan, the Pro-Khalistan Sikhs will extend full support to Pakistan.” in a letter to Pakistan PM Imran Khan.

The hypocrisy of Khalistan proponents

The claim of Khalistanis on Punjab is not supported by any argument. Some brief points are mentioned below:-

If this is not hypocrisy, I am not sure what is! This is one of the reasons that Khalistan has found no support in Bharat, where an overwhelming majority of Sikhs still live. This includes Sikhs who have live out of Punjab and have earned the respect of other communities through their hard work, sewa and friendly nature.

They have built prosperous businesses, achieved highest posts in Armed forces and even led the country as President and Prime Minister. Apart from 1984, which was a rare instance of political violence by Congress against Sikhs, no targeted violence against Sikhs has been recorded by Hindus.

Support for Khalistan in Bharat

This explains why Khalistan has not found any support in Sikhs of Bharat. In the 2017 elections, only one party Shiromani Akali Dal, Amritsar was seen explicitly pro-Khalistan. It was a major force in 1989 elections, when it had won 6 out of 13 Lok Sabha seats of Punjab.

However, in 2017 state elections, it could not get even 50000 votes in all of Punjab and joined the Communist parties at the bottom of the table. Its vote share was about 0.3%! The elections were won with a landslide majority by anti-Khalistan Capt. Amrinder Singh leading the Congress Party. On second place was the nationalist BJP-Akali Dal combine.

The maps released by the Khalistan activists also reveal their motives, their hypocrisy and the Pakistani hand behind them. Consider the map below:- 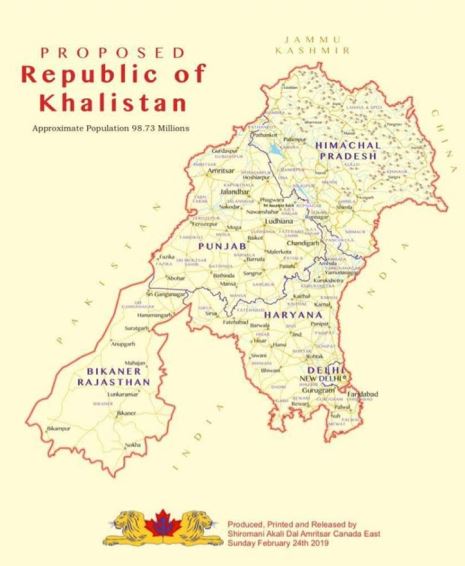 Not only it includes Punjab, but also whole of Delhi, Haryana, Himachal and upto Bikaner in Rajasthan! The population of Sikhs in this area is not more than 15%, so this map is of course not based on population.

Let us say this map is based on Sikh historical sites. In that case, it does not include Lahore, the seat of Sikh power for the whole existence of Sikh empire. It does not even include Nanakana Sahib, where Guru Nanak was born or Kartarpur Sahib, where he attained mukti. Kartarpur is only 4 kilometres from Punjab’s border and Lahore a mere 30 km. But these are not included in the maps.  The maps show, Haqqani says, that “groups like Sikhs for Justice are not willing to forgo Pakistani support.”

As for Canadian Khalistanis, he says, “these people are just being used…there’s no practical way they’re going to get anywhere.” He adds that “Khalistanis in Canada have very little stake in Punjab or India. It’s easy for them to live in a fantasy world – while those who live in Punjab and India live in the real world”

The report asserts that the Khalistanis repeat the same issue of persecution and genocide of Sikhs in Bharat and have succeeded in influencing the policy of Canadian and British governments to some extent. However, Bharat’s Sikh leaders have publicly rebuked Canada’s government on the issue. Capt Singh has been particularly vocal on this issue and has even proposed UN sanctions on Canada.

Khalistanis have tried to assume the new avatar of peaceful protesters. However, they retain connections with extremists and with Pakistani agencies. This movement is dangerous not only for Bharat, but also for Canada. According to the report, “It is the first time that the issue of an independent Khalistan had been elevated to among the top five national security issues for Canadians. “

Bharat should take the issues flagged in the report with all seriousness and try to engage with government as well as NRI and OCI Sikhs for wide dissemination of the findings and a discussion on the issue, informed by facts. Pakistan’s clear hand in this movement also gives it some headroom to “readjust” its policy towards Baloch groups based in countries of Europe and America.