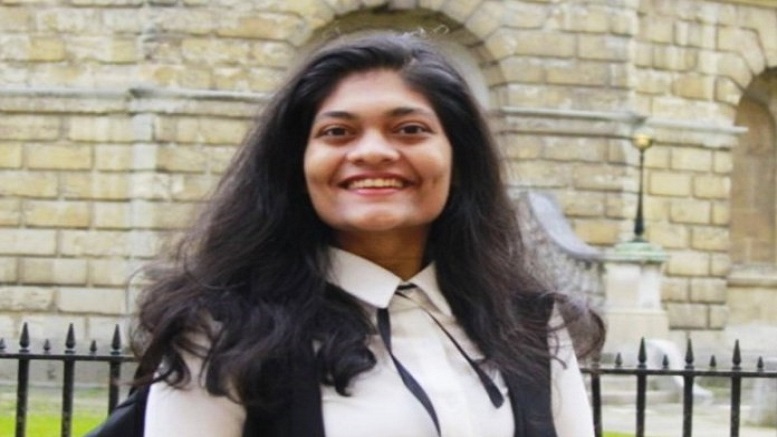 After Hindu student Rashmi Samant was forced to resign from Oxford Student Union after being bullied by Hindumisic gang, societies affiliated with the university have put up a weak defense and instead blamed the student herself.

The Oxford India Society, Oxford Hindu Society, and Oxford South Asian Society believe that there is a need to address the misleading narrative on a recent series of events at the University of Oxford surrounding the former Student Union President-Elect, Ms. Rashmi Samant.

We, the aforementioned societies, unequivocally condemn all forms of discrimination based on, but not limited to, race, religion, national origin, caste, sex, sexual orientation, and gender identity. We recognize that a culture of institutional racism is prevalent in the University and that racism is a lived reality for several members of the University, including brown students. It is with the utmost caution, therefore, that we wish to clarify that this is not why Ms. Samant had to resign, and by that, we mean that neither her nationality nor her religion is what prompted the calls for her resignation. Her narrative of this being a racist attack against her undermines real experiences of racism of students at the University.

There is no doubt whatsoever that Ms. Samant’s now-deleted posts on social media are racially insensitive towards the East-Asian and Jewish communities, and are transphobic. Therefore, although the student body voted for Ms. Samant because of the pledges on her manifesto, ultimately, her insensitive remarks about other minority groups and refusal to accept responsibility for her actions are what prompted calls for her resignation. We reiterate that these calls did not have anything to do with the fact that she is Indian or Hindu or a woman. In fact, the entirety of the Student Union Sabbatical Officer team elected this year is constituted by BAME (Black, Asian, and Minority Ethnic) women, including another Indian woman born and raised as Hindu.

Ms. Samant’s failure to take responsibility for her actions and her attempts at justifying her offensive remarks are reprehensible. We, therefore, express our solidarity with both the Oxford University Student Union Campaign for Racial Awareness and Equality, and LGBTQ+ Campaigns who previously released statements calling for Ms. Samant’s resignation from her position of President-Elect.

Recent coverage of these events in Indian media has incorrectly portrayed that Ms. Samant’s resignation was prompted by an irresponsible social media post from a staff member (not a professor) and by racist comments. This is far from the truth, not least because the said social media post came only after Ms. Rashmi’s resignation. We are concerned that this diverts the focus away from Ms. Samant’s evasion of accountability, and the harm that her actions have caused. It dismisses the Oxford student community’s legitimate demand for accountability from an elected student representative. This demand was expressed through democratic means, including no-confidence motions at four constituent colleges. Any mischaracterization of such democratic demands as ‘cancel culture’ is deplorable. We are deeply concerned that sections of the Indian media are trying to pretend that this issue is one of racism against Hindus or Indians. As societies representing the Hindu, Indian, and South Asian populations on campus, we are displeased by this false narrative, and urge the media to stop pedaling disinformation in the garb of news.

We regret that this series of events has caused various members of the Oxford student community to be subject to online bullying. Often, the same groups hurt by Ms. Samant have been asked to defend themselves and had their lived experiences denied. This is abhorrent. We are acutely aware that Ms. Samant’s post-resignation comments and interviews are feeding into the dangerous Hindutva narrative in India that is fundamentally exclusionary and discriminatory. That Ms. Samant is unable or unwilling to see this, despite having run on a platform of ‘inclusion’ and ‘decolonization’ in Oxford, is unfortunate.

In what is typical of organizations in denial, the above societies have chosen to blame the victim and as is clear from their statement are aiming to build a narrative of the victim being the aggressor. It does not come as a surprise considering the fact that these societies are merely a front for the left-liberal cabal. It must be pointed out here that these societies had expressed solidarity with the ongoing farmer protests run by break-Bharat forces.

Instead of sympathizing with a person who has been subjected to online bullying who is so traumatized that she doesn’t even feel safe going back to the institute, the societies have chosen to side with Oxford University Student Union Campaign for Racial Awareness and Equality, and LGBTQ+ Campaigns that had facilitated the attack on Rashmi.

It is a clear attempt to white-wash the abuse faced by Samant and at the same time deny Hindumisia which is very much a reality. Hindus are often subject to the worst form of racial slurs particularly by Pakistanis and Bangladeshis in the West.

Pakistan-born actor Marc Anwar has been sacked from a UK serial ‘Coronation Street’ after posting racially offensive comments about Bharatiyas on Twitter, as per reports in British paper Guardian. The Sunday Mirror published screenshots of messages posted on his private Twitter account that hit out at Bharat over Kashmir and called for Pakistani actors to stop working in the country. They also referred to people from Bharat as “bastards” and “piss-drinking cunts”.

Not to mention the casteist slurs:

Mohammed Mahee Ferdous Jalil,  the controversial UK-based  Bangladeshi Muslim businessman and founder of Channel S, a TV channel, in a program  ‘COVID-19’  broadcast on his channel on May 3, 2020, remarked  that Bengali Muslims who came to the UK from Bangladesh have the blood of low caste Hindus. He also implied that this was the reason Muslim shopkeepers cheat their customers.

The statement is a clear attempt to divert the issue of rampant Hindumisia that Samant had to face for statements made that can at best be called misplaced humour. Further, Samant had not just apologized but also clarified that her statements were made out of ignorance. It is also laughable that a Hindu would be called an anti-semite. History is proof that Hindus have provided refuge to persecuted communities including Parsis and Jews.

The societies also came out in support of Oxford Professor Abhijit Sarkar’s vitriolic post directed at Samant’s parents and their Hindu roots. While they asked Sarkar to apologize to Samant merely to appear neutral they were more concerned about the focus being taken away from Samant’s “evasion of accountability and harm that her actions have caused”.

Clearly, this is an attempt by leftist dominated societies to vilify Samant in the name of Hindutva and ensure that Hindumisic gangs continue to get a free pass. Hindu voices like that of Samant who call out anti-Hindu bigotry ought to be heard rather than being suppressed as the so-called Indian and Hindu groups are doing here.

Pandit Satish K Sharma who chairs the British Board of Dharmic Scholars has demanded action against Sarkar for triggering the harassment of Samant leading to her hospitalization owing to nervous breakdown. He has pointed out that she was hounded out and that a viscous atmosphere has been created on the campus.

He further opined that she should have been allowed to continue and finish her studies and that the societies should have issued a more sensible statement but that the latter along with Sarkar purposely created a hostile environment leading to Samant being denied her right to complete her studies.

He said that these societies have added fuel to the fire and that it is typical of what is happening at the Oxford University where such an environment is being deliberately engineered. He said that they have brought the harassment of Samant by Sarkar to the attention of the police and that the Oxford police have corroborated the professor having directed hate speech towards Samant.

Additionally, he said that the legal opinion on the statement issued by the two societies indicates that the students of these societies are have turned student politics into villification and bullying of a student. These societies would also have to face the legal consequences of their actions.

Legal charges are set to be pressed against the societies as well added Pandit Sharma. He reiterated the point that Samant is being targeted for being a Hindu from Bharat and there are enough legal grounds for ensuring justice is served in this case.

This case highlights how leftist groups twist the narrative to suit their agenda and bully anyone who doesn’t agree with their world-view. It is hightime the University steps in to stop such harassment and villification of students just because they are Hindus and aren’t in agreement with leftist views.