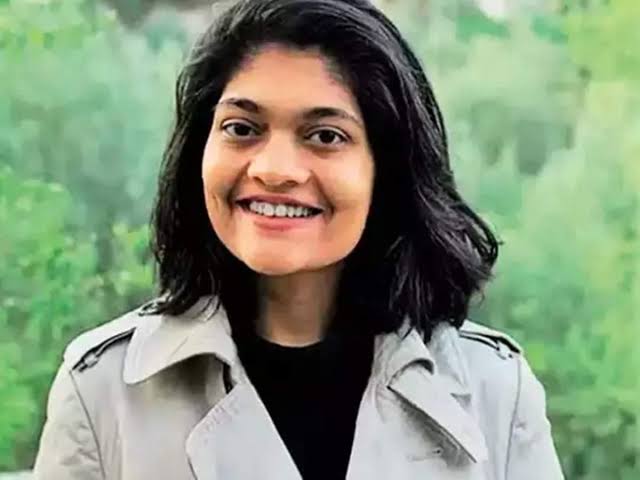 After Hindu professionals at Cisco were targeted by liberals and organisations like Equality Lab in the USA with false accusations, the left-liberal cabal in the UK has trained its guns on a young girl, Rashmi Samant, who is said to be the first graduate of her family. For a first generation graduate, she has been exceptionally good with an engineering degree from Manipal Institute of Technology and went to pursue her studies in Oxford. She went on to become the first ever female president of the Oxford Student Union, polling 1966 votes out of the 3708 total votes cast, more than all the other candidates combined. One of her key campaign themes was decolonisation.

Perhaps that was what triggered the left-liberals, for she was asked, ‘Why do you seek a policy of decolonisation when it played such an ‘integral role’ in bringing about a global world without which billions more would be still living a life of absolute poverty?’. Being from Udupi, Dakshina Kannada where Hindu Dharma thrives, she not only had brains but was also imbibed with the culture of Hindu Dharma. She replied that she refused to believe ‘colonisation was a positive experience for the indigenous people of the colonies’.

So perhaps it was an eyesore for the Hindumisic crowd that disguises itself under various ‘isms’ that someone so young from a Dharmik background could achieve such a feat like winning the Students Union election without any support from their ecosystem. So they seem to have dug up her old social media posts which were made in teenage naivete, took them out of context, managed to rile up some from the Jewish, East Asian and transgender communities to make a ‘racist’ out of her and bullied her into resigning.

Discrediting Rashmi Based on many years old SM posts

She is said to have written ‘offensive’ social media posts on the Holocaust memorial, used Chinese words learnt through Google translation and used ‘transwomen’ instead of ‘transgender’ in ignorance. This was blown up and she was made into a racist. She supposedly wrote ‘The memorial *CASTS* a *HOLLOW* dream of the past atrocities and deeds’ posing in front of the Holocaust memorial in 2017, intended as a juvenile pun on the word ‘Holocaust’, which refers to the genocide of Europe’s Jews by the Nazis.

She has pleaded ignorance saying that as a non-native English speaker she didn’t realize that her pun could be misconstrued as insensitive. Anyone who knows even a little about Hindu history would laugh at the idea of a Hindu being called ‘anti-Semite’: Bharat has given shelter to persecuted Jews for centuries, including during World War 2.

In another post she used the words ‘Ching Chang’ with a photo of her in a Buddhist temple with folded hands. She claims that she used those words to mean ‘eat plants’ as she found it difficult to get vegetarian food in the country. It appears to be a Google translation of ‘eat plants’ as pointed out by some. However some Chinese students are said to have found it offensive.

If these posts are offensive, then what Hindus face on a daily basis with slurs like ‘idol worshippers’, ‘cow piss drinkers’, ‘rapists’, ‘satan worshippers’ is outright dehumanizing and criminal. Rashmi unreservedly apologised for her old posts, yet her apology was deemed not good enough.

Faculty first targeted Rashmi for being a Sanatani/Hindu

What is more, they couldn’t stop at demonising Rashmi and dragged her parents into the issue, over a picture they had posted from their social media account. The picture is of the two of them with the image of Shri Rama, with the words Jai Shri Ram written on it. This despicable targeting was done by a faculty at the University, no less, and he also happens to be of Bharatiya-origin and Hindu (at least in name). Abhijit Sarkar, a post doctoral researcher, appears to have ignited the hate campaign against Rashmi Samant calling her ‘racist, islamaphobic, xenophobic, anti-Semitic and transphobic’. Without any proof, he went ahead to run down Rashmi and her parents based on the social media picture and Rashmi’s college of graduation and hometown, Udupi in South Karnataka.

A postdoc researcher at Oxford found an old photo from her mother's social media to specifically establish her family's religion. Her Hinduness was then marked as the *source* of her "intentional" bigotry. It spiralled from there. pic.twitter.com/tbJyr0XULj

He castigated her for being a Modi supporter (there can be no bigger crime in a Hindu-hater’s mind) just from the fact that her college, Manipal Institute of Technology, has a picture of the PM on its website. She or her parents nowhere expressed anything against Muslims but the picture of Shri Rama was enough for him to brand them as ‘Islamaphobic’ people ‘celebrating the destruction of a mosque and establishment of a Hindu temple on the site’. He even brands the region from where she hails as ‘a bastion of islamophobic far right forces’.

To make this believable he also calls PM Modi as ‘the supreme leader‘ giving an impression that he is a dictator and insinuates that Rashmi’s election campaign could have been funded by BJP. What really bothered him can be understood from a line in his social media post, ‘far right desi people hate white people and western modernity’ and that they want to ‘reinstate Sanatan Hindu “culture” with its inherent caste-based tortures and the most violent form of patriarchy.’.

This should be a good lesson for all those Hindus who think that hate for Hindutva does not mean hate for Hindus. The fact is, Hindutva-bashing is just a facade, what people like Abhijit Sarkar really hate is all of Hindu culture which in their poisoned minds is all about ‘caste tortures and patriarchy.’ For them, there is only one solution to the ‘Hindu problem’ – complete eradication of Hindu Dharma.

Sarkar’s main issue with Rashmi is revealed in the last line of his post targeting her and her parents in which he says ‘Oxford students are not ready for ‘Sanatani’ president’. 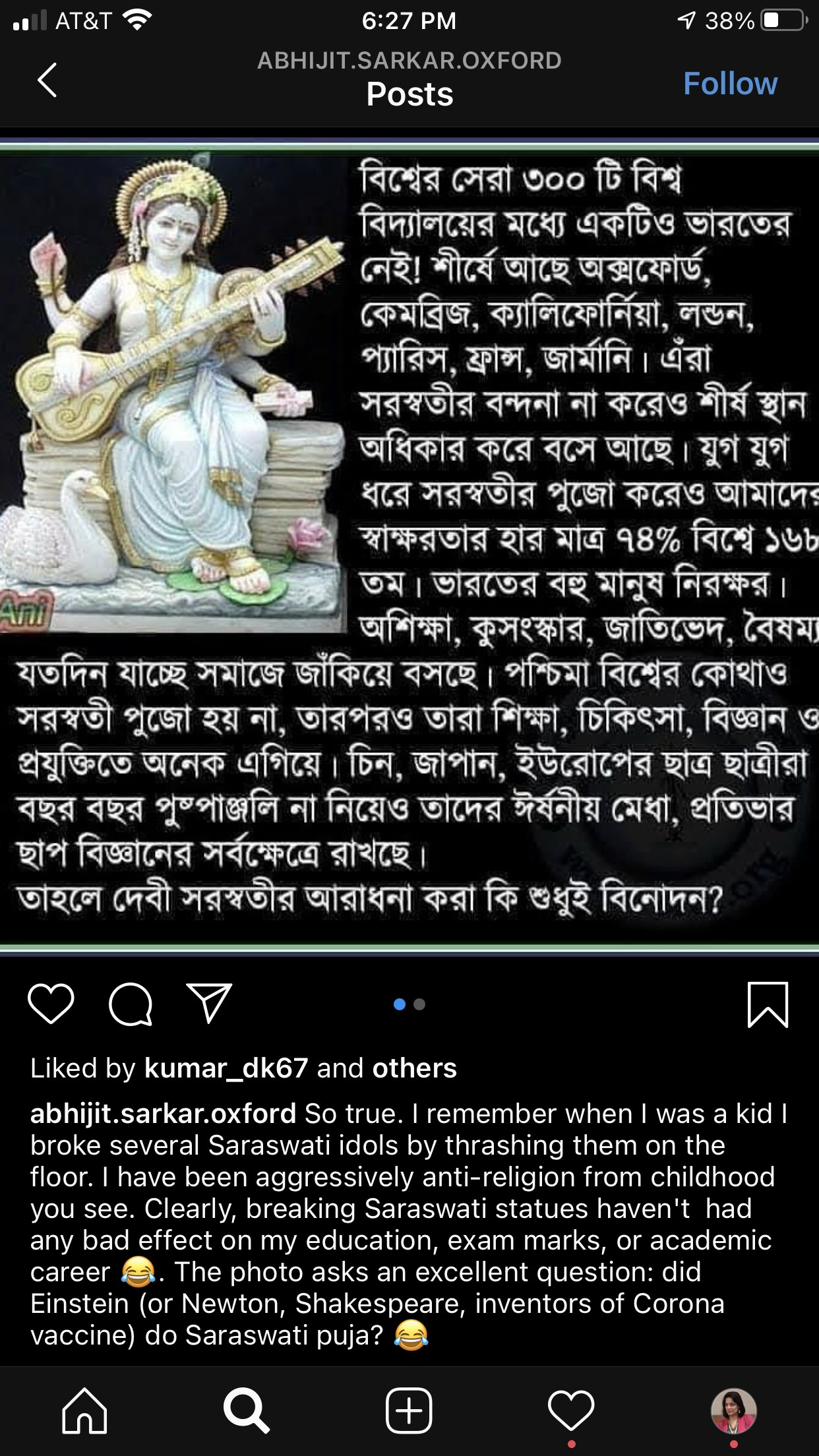 Sarkar does not hide his hatred for Hindu Dharma and it is evident from his other post. In this, he admits that he is an atheist and ‘aggressively’ anti-religion and that he broke several Saraswati murtis in his childhood and shared a picture questioning whether ‘Newton and Einstein did Saraswati Puja’? This is the level of bigoted and juvenile discourse which an Oxford faculty is promoting! Unfortunately, this is the kind of universalism that many in the West promote which demeans and degrades other civilizations and cultures, and desi sepoys just lap it up. Does Sarkar mean to say that only atheists (Newton was a practising Christian by the way) make good scientists? Or does he think that only the West can produce good scientists? No wonder, left-liberals go ballistic when a ISRO space scientist visits a Hindu temple before a satellite launch!

Some observers have pointed out that Rashmi was thrown under the bus by the same left-liberals that she identified with. Her manifesto states that as a woman of Black, Asian and Minority Ethnic community she will work for more diverse representation, inclusion of the LGBTQ+ community, and lobby against the usage of fossil fuels. But these lofty goals this did not protect her from the flimsy charges levelled against her by Hindupbhobic left-liberals.

After being forced to resign through cyber bullying Rashmi has penned a letter saying ‘The fact that I am a Hindu in no way makes me intolerant or unfit to be the President of the Oxford SU’.

However it is exactly that: her ‘Sanatani/Hindu’ nature, which is being targeted here as evident from the words ‘Oxford students are not ready for ‘Sanatani’ president’. In the name of exposing bigotry, such venom is poured on those who practice Hindu Dharma to effectively discourage Hindus from either following their aspirations, or to abandon their religion and culture to succeed in professional goals. Rashmi is getting the much needed support and many Hindus trended #DismissAbhijitSarkar, demanding Oxford to take action against the professor.

Rashmi has found support as she rose to the heights and was in the limelight for winning a Students Union election in a British university. But what of other such innumerable young girls and boys who go to such foreign institutions with big dreams? There are many Abhijit Sarkars in the field of education and one of them is Priyamvada Gopal, a faculty at Cambridge. She has exhibited equal amounts of, if not more, hatred for Hindu Dharma in her social media posts than Abhijit. She actually targeted a micro-minority among Hindu community, Brahmins, during the George Floyd, #BlackLivesMatter movement and posted in FB that even though she is a Brahmin herself, ‘Brahmin lives don’t matter’. She said the same about white people but deleted the post after severe backlash and allegedly got promotion after she made comments abusing Hindus.

Even though she claims to be a Brahmin and has an ‘insider view’ on Hindu Dharma, she doesn’t even know the basic things about when or how Hindus say Om Shanti. With polished English and a position in a noted institution, such people think they are the representatives of Bharat and Hindus, and make the life of youngsters with a different point of view hell. So while we are extending our support to Rashmi, we must also find measures to tackle such bullying and prevent it before more such young lives are spoiled. More than that Bharat needs quality educational institutions that make sure our talented youngsters don’t have to cross the seas to fulfil their aspirations and face such humiliation.